A revolutionary and strange priest
who moved from Boston to Limerick 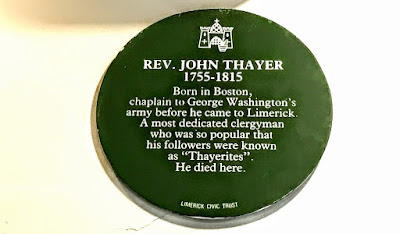 The Limerick Civic Trust plaque in Arthur’s Quay shopping centre commemorating John Thayer … but who was he and who were the Thayerites? (Photograph: Patrick Comerford, 2018)

On a stroll through Arthur’s Quay shopping centre in Limerick after presiding at the Sung Eucharist in Saint Mary’s Cathedral, I noticed a plaque erected by Limerick Civic Trust at the Patrick Street entrance that reads:

Rev. John Thayer
1755-1815
Born in Boston,
chaplain to George Washington’s
army before he came to Limerick.
A most dedicated clergyman
who was so popular that
his followers were known
as the “Thayerites”.
He died here.

My curiosity was sparked, and I decided to find out more about this American chaplain who had died in Limerick over two centuries ago. It is a story that stretches from Boston to Paris, Rome and London, before returning to America and eventually ending in Limerick.

John Thayer (1755-1815) was the first native-born man from New England to be ordained a priest in the Roman Catholic Church.

Thayer was born in Boston, Massachusetts, in 1755. His family were among the early Puritan settlers of New England and throughout his career, it is said, he continued to display a stern, unbending Puritan character.

He was educated at Yale and was ordained as a Congregationalist minister and during the American Revolutionary War he was chaplain to a company organised for the defence of Boston and commanded by John Hancock. But he had never been a chaplain to George Washington.

After the American War of Independence, Thayer embarked on the ‘Grand Tour’ of Europe to better prepare himself for a teaching career at Harvard. He travelled throughout Europe, and he was in Rome in 1783 when the mendicant, Saint Benedict Joseph Labre, died that year. Thayer became a Roman Catholic, saying his conversion was brought about by the miracles attributed to the saint.

Thayer tried to dispute some of the miracles attributed to the monk, who was later canonised by Pope Leo XIII in 1883. Instead, he became convinced of the man’s saintliness and he was received into the Roman Catholic Church by Pope Pius VI on 25 May 1783.

His account of his conversion was printed in 1787 and went through several editions in the US, London and Ireland, and was also translated into French and Spanish. His conversion was one of the first of prominent New England Protestants, and caused a sensation in New England: both Benjamin Franklin and Noah Webster scoffed at Thayer’s conversion, and one of his former Congregationalist colleagues called him ‘John Turncoat.’

Thayer studied for the priesthood with the Sulpician order in Paris, and was ordained priest by the Archbishop of Paris on the Ember Saturday of Pentecost 1787, and celebrated his first Mass the next day, Trinity Sunday.

He worked among the poor in Southwark in London for less than three years before returning to America in December 1789. On his arrival back at Baltimore, Bishop John Carroll (1735-1815), the Jesuit and founder of Georgetown University, sent him to Boston, where his congregation consisted of one American, four Frenchmen, and about 24 poor Irish immigrants.

Thayer had a chequered career, mainly due to his erratic and confrontational temperament. He was a forceful and not always tactful polemicist in his sermons, printed tracts, and frequent newspaper articles. After a brief and difficult time in Boston, he was sent to the scattered Catholic communities first in Alexandria, Virginia, and then in Kentucky.

He made a name for himself as a Catholic voice against slavery. But his travels in the South were short-lived, and within four years he had left again for Europe in 1803.

He visited London, La Trappe in France, and Dublin, and in 1811 he settled in Limerick, where he lived the life of an ascetic and where he was much more successful in his ministry. In Limerick, he was regarded as a priest of edifying piety and ascetic life. But he had no charge, as parish priest or curate, although he said Mass and heard confessions in Saint Michael’s Parish and Saint John’s Parish and often preached sermons that were controversial.

When he first came to Limerick, confessions were rare except at Easter. But his sermons encouraged many to confess monthly and even more frequently. His large number of penitents were nicknamed Thayerites by those who opposed this form of piety.

Father Thayer stayed at Patrick Street in Limerick in the home of James Ryan, a prosperous cloth merchant, and was French tutor to the youngest daughter in the family, Margaret.

He died in Limerick on 15 February 1815 in the Ryan house, which stood on the site of the entrance to Arthur’s Quay Shopping Centre. He was buried in the churchyard at Saint John’s Church of Ireland parish church in Limerick. Since his death, he has been compared at times with the Curé of Ars.

After his death, Thayer’s estate was used by James Ryan’s three daughters to found an Ursuline convent, Mount Benedict, near Bunker Hill in Charlestown, Massachusetts. They moved from Limerick to Boston in 1819, and founded their convent, the first established in New England, in 1826. However, their convent was burned down in anti-Catholic rioting on the night of 11 August 1834. The mob was ‘incited by Lyman Beecher and whiskey,’ in the words of Daniel Sargent. 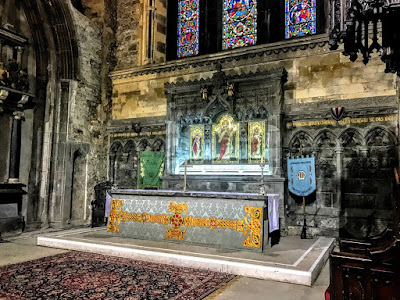 Saint Mary’s Cathedral, Limerick … I visited the site of the house where John Thayer died after presiding at the Sung Eucharist on Sunday (Photograph: Patrick Comerford, 2018)