Following the Stations
of the Cross in Lent 8:
Longford 6: Veronica
wipes the face of Jesus 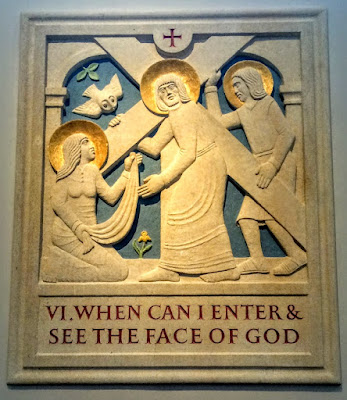 The idea for this series of morning Lenten meditations came from reading about Peter Walker’s new exhibition, ‘Imagining the Crucifixion,’ inspired by the Stations of the Cross, which opened in Lichfield Cathedral a week ago [Ash Wednesday, 14 February 2018] and continues throughout Lent.

Station 6 illustrates a story that is not told in any of the four Gospel accounts of Christ’s journey to Calvary, although there are some parallels with the story of the woman who was healed miraculously by touching the hem Christ’s garment (Luke 8: 43-48).

In this station in Longford, Veronica is on her knees, offering her veil with both her hands. Christ stretches out his left hand, while Simon of Cyrene continues to prop up the Cross. All three are crowned with haloes.

Once again, a daffodil has come to full bloom, seen on the ground between Veronica and Christ, a sing of hope in Spring-time. In William Shakespeare’s The Winter’s Tale (Act 4, Scene 3), Perdita speaks of

... ... Daffodils,
That come before the swallow dares, and take
The winds of March with beauty ...

Above, in this Station an owl observes the scene, hovering above the head of Saint Veronica as an omen of death.

The inscription in terracotta capital letters below the panel reads: ‘When Can I Enter & See the Face of God.’ This seems to be a reference to Psalm 42: ‘My soul thirsts for God, for the living God. When shall I come and behold the face of God?’ (Psalm Luke 42: 2).

According to tradition, Veronica is moved with sympathy when she sees Christ carrying his cross and gives him her veil to wipe his forehead. When he hands back the veil, it is marked with the image of his face.

In the Middle Ages, there was a mistaken idea that the name Veronica was derived from the Latin vera (true) and Greek eikon (image). But, in fact, Veronica is a Latin transliteration of the Greek name Berenice (Βερενίκη). This, in turn, was the Macedonian form of the Athenian Φερενίκη (Phereníkē) or Φερονίκη (Pheroníkē), meaning ‘she who brings victory.’ It became popular because of its use by the Ptolemies, the Seleucids and other dynasties in the east Mediterranean.

The popular mediaeval stories that developed in the West around the figure of Veronica have their counterpart in the East in the legends about King Abgar of Edessa and the Mandylion, also known as ‘The Icon not made by Hands’.

A copy of ‘The Icon not made by Hands’ or the ‘Mandylion’ (Photograph: Patrick Comerford)