Following the Stations
of the Cross in Lent 38:
Lichfield 6: Veronica 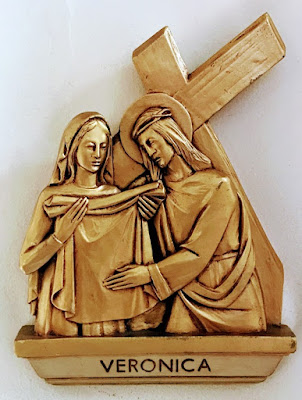 Veronica is not a Biblical or historical figure, but her name reminds us of every woman who takes a stand for truth, even when great personal costs and risks are involved.

I was staying at Glenstal Abbey when I heard the news that the journalist Veronica Guerin had been murdered on 26 June 1996. She first wrote for the Sunday Business Post and the Sunday Tribune, and began writing about crime for the Sunday Independent on 1994. She was shot dead while she was stopped at traffic lights near Newlands Cross, on the outskirts of Dublin. She was due to speak two days later at a conference in London on ‘journalists at risk.’

Her murder caused national outrage in Ireland, and the Taoiseach John Bruton called it ‘an attack on democracy.’

Her name and those of 38 other international journalists who died in the line of duty in 1996 were added to the Freedom Forum Journalists Memorial in Arlington, Virginia, in 1997. In 2000, she was named as one of the International Press Institute's 50 World Press Freedom Heroes of the past 50 years. The Veronica Guerin Memorial Scholarship at Dublin City University offers a bursary for a student following the MA in Journalism who wishes to specialise in investigative journalism.

Her husband Graham Turley has said: ‘Veronica stood for freedom to write. She stood as light, and wrote of life in Ireland today, and told the truth. Veronica was not a judge, nor was she a juror, but she paid the ultimate price with the sacrifice of her life.’ 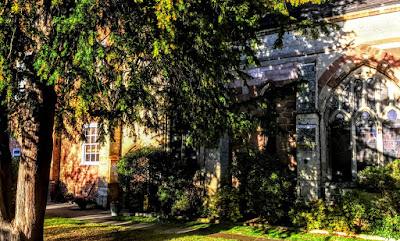 In the garden beside the chapel in Saint John’s Hospital, Lichfield (Photograph: Patrick Comerford)