Following the Stations
of the Cross in Lent 39:
Lichfield 7: Second Fall 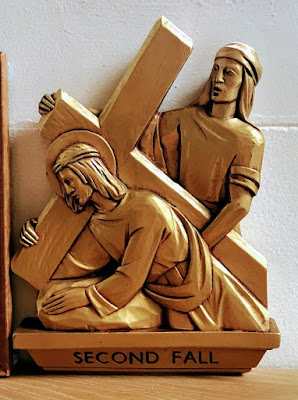 Although Simon of Cyrene has come to help Jesus carry his cross, although Veronica has sought to sooth his brow, Jesus falls beneath the weight of his cross a second time.

In Station VII in Lichfield, Jesus seems to seek to break his fall by holding his hand towards a rock on his path. Simon is seen trying to lift the cross with both hands as Jesus stumbles and falls on the city streets; he is no reluctant conscript but actively trying to share Christ’s burden.

In the past, at times, the Church had an appalling record for how it treated people regarded as ‘fallen.’ Instead of helping many women in distress, it condemned them to the Magdalene laundries, and often conspired in the inhumane treatment of their children.

But the Church has also responded with both hands to people who have fallen to the bottom of the system because of economic and social policies. I pray this morning for people from the churches who are working together on the streets of Athens and on the Greek islands with refugees and asylum seekers.

Tomorrow: ‘The Women’ … Station 8 in the Chapel at Saint John’s Hospital, Lichfield, Jesus meets the women of Jerusalem. 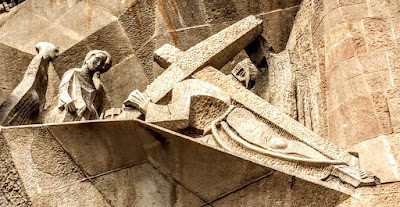 Jesus Falls … one of the sculptures on the Basilica of Sagrada Familia in Barcelona (Photograph: Patrick Comerford)