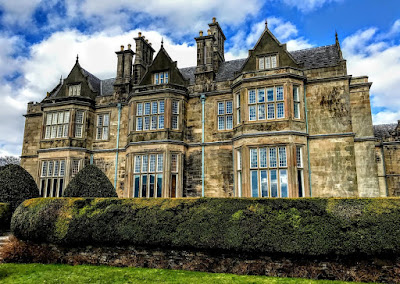 Muckross House stands on the small Muckross Peninsula, between Muckross Lake and Lough Leane, two of the lakes of Killarney (Photograph: Patrick Comerford, 2018; click on images for full-screen resolution)

I find on most weekends that by Sunday afternoon I am comfortably tired. I have come to recognise this as a positive sign of how I have worked and prepared for my liturgical and preaching commitments each week.

I sometimes say with humour that all I am fit for on a Sunday afternoon is to sit back and watch cricket or rugby. But, more often than not, this means a walk on a beach or by a riverbank or lakeshore.

This week, two of us drove from Holy Trinity Church, Rathkeale, Co Limerick, to Killarney, Co Kerry, to see the Lakes of Killarney, Torc Waterfall, and the grounds of Muckross House, which is part of the Killarney National Park.

Muckross House stands on the small Muckross Peninsula, between Muckross Lake and Lough Leane, two of the lakes of Killarney, 6 km south the town. The house is best known for its parkland setting beside the Lower Lake at Killarney, but it is also interesting architecturally and is, perhaps, the finest example of the Elizabethan Revival style in Co Kerry.

Muckross House, named as Muckross Abbey on the first edition of the Ordnance Survey in the 1840s, is said to be the fourth house built by successive generations of the Herbert family on lands granted in 1586 by Queen Elizabeth.

The house was designed by the Scottish architect, William Burn (1789-1870), who was just beginning to establish himself as a country house architect. A talented architect, he was a pioneer of the Scottish Baronial style, and received major commissions from the age of 20 until his death at 80.

Burn was born on Rose Street in Edinburgh, the son of an architect, Robert Burn. After training with the architect Sir Robert Smirke, designer of the British Museum, he returned to Edinburgh in 1812 where he established his practice.

He was living and working at 131 George Street in the New Town, Edinburgh in the 1830s. He a master of many styles, but all are typified by well-proportioned simplicity externally and frequent stunning interiors. He worked in London from 1844. He died at 6 Stratton Street in Piccadilly, London, and is buried in Kensal Green Cemetery, on the edge of the path to the Anglican Chapel.

Burn designed Muckross House in the Tudor Gothic style with 65 rooms, and it is a highly successful example of the Tudor Gothic or Elizabethan Revival style, then popular in Ireland. The array of tall chimneys, oriels, stepped gables, finials and mullioned windows are all skilfully integrated into a crisp composition

Muckross House has an asymmetrical entrance front that gives way to a symmetrical garden front where a series of reception rooms open en suite. Handsome bay windows define each front and show cut-sandstone mullioned dressings. Overhead, the steep gables are crowned by spiky finials, while elongated grouped chimney stacks embellish the roofline. The interior was built with the same magnificence as the exterior, although the rooms have now lost most of their original Victorian furnishings.

The cost of building the house is estimated at £30,000. It was originally intended that the house would also include an extensive servants’ quarters, a stable block, an orangery and a summer house. But the scale of the project was cut back at the behest of Mary Herbert who, although living most of the year in England, arranged a number of fundraisers to assist tenants on the estate during the Great Famine (1845-1849). 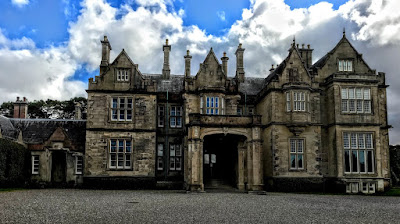 The imposing porte cochère at Muckross was a later ‘improvement’ completed to a design in 1857 by William Atkins (1812-1887) of Cork, who was also responsible for farm buildings, a gateway with accompanying lodge, and the nearby Holy Trinity Church (Muckross) at Cloghereen.

Atkins married his cousin Louisa Gelston (1812-1904) in 1845. Two years later, he inherited half the estate of his grandfather William Atkins at Fountainville, and he farmed the property until 1854. In the second half of the 1860s, he designed several new Church of Ireland churches, which suggests he may have been a district architect for the Ecclesiastical Commissioners at this time.

Queen Victoria arrived in Killarney on Monday 26 August 1861. The royal party spent their first night at Killarney House, the seat of the Earl of Kenmare, where the visit was considered a formal state occasion. However, her two-night stay at Muckross was regarded as a private affair, with the local press reporting that ‘her Majesty … had declared her intention of being ‘very quiet’ while at Muckross.’

Queen Victoria arrived at Muckross with Valentine Augustus Browne (1825-1905), 4th Earl of Kenmare, as her escort. The Times reported she was met by her hosts on the lawns at the door of the house and a gathering of ladies and gentlemen greeted her enthusiastically.

On entering the house, Queen Victoria would have seen the Persian carpets, mirrors and tapestries specially commissioned for her visit. The curtains still hanging in the dining room are believed to have been woven in Brussels or Paris, while an heraldic sideboard was imported from Italy. New china, linen and silverware were used at the meals, while the servants were dressed in new uniforms. 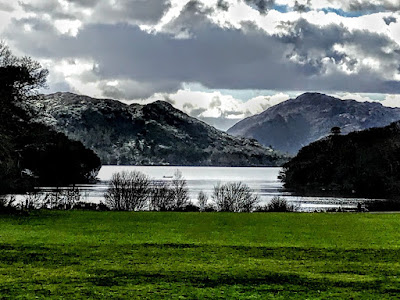 A suite of rooms commanding panoramic vistas overlooking Lough Leane and Muckross Lake was reserved at Muckross House for the exclusive use of Queen Victoria (Photograph: Patrick Comerford, 2018)

A suite of rooms commanding panoramic vistas overlooking Lough Leane and Muckross Lake was reserved for the exclusive use of the queen. with the Kerry Evening Post reporting that ‘an entire section of the mansion has been set apart for the royal family, so that all their apartments communicate without the necessity of passing into the corridors to be used by other occupants of the house. … In her sitting room – which, like all others, is a splendid apartment furnished richly and tastefully – there is a series of views of the Lakes of Killarney, painted by Mrs Herbert. They are works of the highest artistic excellence.’ 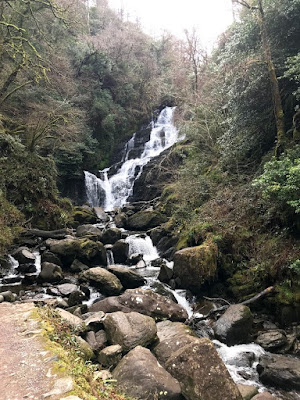 The following day, Queen Victoria, accompanied in her carriage by Mrs Herbert, drove around the demesne, visiting Dinish Island, Mangerton Mountain and the Torc Waterfall. After lunch, the party embarked at the boathouse to view a stag hunt on the lake. The queen probably planted some trees ceremonially, and a copse near the site of the old stable yard was known as the ‘Queen’s Trees.’ 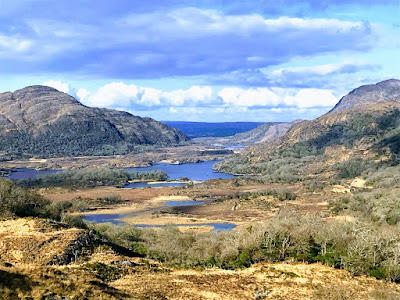 Ladies’ View, 17 km south of Killarney, takes its name from the pleasure expressed by Queen Victoria’s ladies-in-waiting when they visited the place.

On the morning she left, Queen Victoria visited the ruins of the 15th century Muckross Abbey in the grounds. Eleanor, the eldest Herbert daughter, remarked that the Queen ‘is to have ivy from the Abbey and ferns from various places sent to Osborne [the royal palace on the Isle of Wight] as recollections of this place.’

Before leaving Killarney, Queen Victoria presented Mrs Herbert with a bracelet of gold, pearls and diamonds. In return, Mrs Herbert presented three of her watercolours, The Upper Lake, The Middle Lake from Copper Mine Bay and The Lower Lake with Fir Island; these paintings are still held in the Royal Collection at Windsor Castle.

However, the cost associated with the improvements to house and the entertainment of Queen Victoria had contributed to the family’s financial difficulties, along with the loss of rental income and ill-advised financial investments. The estate was put up for auction by the Standard Life Assurance Company in 1899, but it was withdrawn from sale because of a lack of interest at the time.

Later that year, Muckross was sold to Arthur Edward Guinness (1840-1915), 1st Baron Ardilaun, of Ashford Castle, Co Galway, who was related by marriage to the Herbert family. He wanted to preserve the dramatic landscape, but he did not live in the house himself. Instead, he rented the house to wealthy groups as a seasonal hunting lodge.

Shortly before the outbreak of World War I, Muckross House and its demesne were again in 1911 sold to William Bowers Bourn II (1857-1936), a wealthy Californian entrepreneur and mining magnate. William and wife Agnes Bowers Bourn gave Muckross to their daughter Maud and her husband Arthur Rose Vincent as a wedding present.

The couple lived there until Maud died from pneumonia in 1929. While they were living there, the improvements they made cost over £110,000 and included building the Rock Garden, the Stream Garden, and the Sunken Garden (1915).

Three years later, Maud’s parents and her widowed husband, Senator Arthur Rose Vincent (1876-1956), decided to present Muckross House and the 11,000 acre estate to the Irish nation in 1932, on the understanding that its peace and tranquillity would never be disturbed by the sound of motor cars. It was called the ‘Bourne-Vincent Memorial Park,’ it became the first National Park in the Republic of Ireland and it formed the basis of the present-day Killarney National Park. In later years, the park was substantially expanded with the acquisition of land from the former estate of the Earls of Kenmare.

Killarney National Park is now a magnificent park extended to more than 10,000 hectares, including the three Lakes of Killarney and surrounding mountains and woodland. The park is today administered and managed by the National Parks and Wildlife Service, while Muckross House is managed jointly by the Office of Public Works and the Trustees of Muckross House.

Muckross House was restored in two stages from 1983 to 1995. The second stage included the redecoration of the billiard room, dining room, boudoir and Queen Victoria’s bedroom and dressing room. The boudoir in the suite of rooms reserved exclusively for Queen Victoria was restored in 1990-1995, and the décor and furnishings were based on photographs of the room taken in 1865. Surviving furniture was restored and supplemented by period furniture of the Victorian era.

The Trustees of Muckross House organised a Herbert family reunion at Muckross House in 1999. An exhibition of watercolours by Mary Balfour Herbert was part of the special occasion. For the first time in 100 years, members of the Herbert family gathered at Muckross House, with widely scattered family members and descendants coming from England and America. Many of them were previously unaware of each other’s existence. 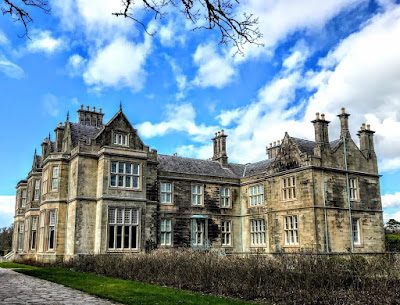