Following the Stations
of the Cross in Lent 41:
Lichfield 9: Third Fall 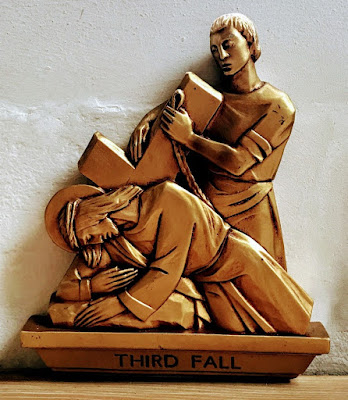 This is Holy Week and the last week in Lent. Throughout Holy Week, there are special services in each of the churches in the Rathkeale and Kilnaughtin Group of Parishes. This evening, this service is Evening Prayer at 8 p.m.in Saint Mary’s Church, Askeaton.

In this station in Saint John’s, Christ has stumbled and fallen for a third time. The Roman soldier who has been whipping and goading him all along the way now seems tired and exhausted too, as he tries to hold up an arm of the cross with both hands, his whip hanging limply in one hand, without any hint of a gesture to move Christ on with force.

Christ holds onto his cross with one hand, but with both arms he embraces the jagged rock that has broken his fall and that must be bruising his already much-bruised body.

Psalm 18 refers to God as ‘my rock, my fortress and my deliverer’ (verse 2), and Psalm 95 speaks of God as ‘the rock of our salvation’ (verse 1). But this morning I am reminded of the words of the Prophet Habakkuk: ‘The very stones will cry out from the wall, and the plaster] will respond from the woodwork’ (Habakkuk 2: 11).

These words of Habakkuk are recalled in Saint Luke’s account of Christ’s entry into Jerusalem on Palm Sunday:

As he was now approaching the path down from the Mount of Olives, the whole multitude of the disciples began to praise God joyfully with a loud voice for all the deeds of power that they had seen, saying,

‘Blessed is the king
who comes in the name of the Lord!
Peace in heaven,
and glory in the highest heaven!’
Some of the Pharisees in the crowd said to him, ‘Teacher, order your disciples to stop.’ He answered, ‘I tell you, if these were silent, the stones would shout out’ (Luke 19: 37-40).

Brutalised. Dazed. Beyond strength.
Now nearly on Calvary’s broad summit, Jesus collapses.
Poles long set into the ground are silhouetted against grey clouds.
Impatiently, Jesus is pulled up and shoved angrily toward his death.

The Collect of the Day (Monday in Holy Week):

Tomorrow: ‘Stripped’ … Station 10 in the Chapel at Saint John’s Hospital, Lichfield, Jesus is stripped of his clothes. 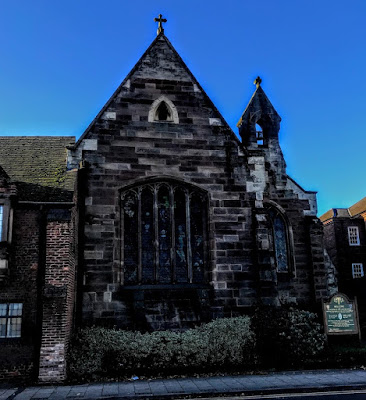