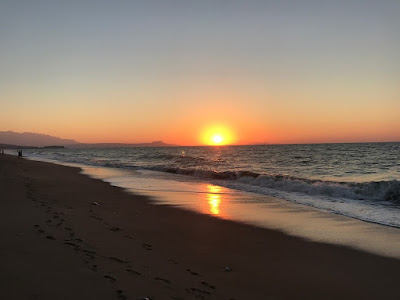 Sunset on the beach at Platanes in Rethymnon … one of the photographs selected by Sheba Sultan to illustrate her selections from writers and poets (Photograph: Patrick Comerford)

It is always a delight for a writer to realise another writer appreciates your work. It may be a footnote or a reference, or acknowledging an insight or original idea, sometimes it may even be a kind reference in the acknowledgements, either at the end or the beginning of a book.

I hope I never became complacent or assumed it was mere good manners when students acknowledged me when their dissertations were published as books.

But sometimes I have come across a reference or a footnote to my work long after a book has been published, without realising the author was going to do this.

Sheba Sultan, who is a lecturer in the Institute of Business Management, lives in Karachi and is one of the great modern writers in Pakistan today. We met some years ago at High Leigh in Hertfordshire when she was one of the speakers at the annual conference of the Anglican mission agency USPG (United Society Partners in the Gospel), and we have kept in contact ever since. Earlier this summer, I chaired a session at this year’s USPG conference in High Leigh that was addressed by her father, the Revd Dr Pervaiz Sultan.

In recent weeks, I have been reading Sheba’s collection of short stories The Room in the Mausoleum, first published in Karachi in 2015 and which she sent to me earlier this year. She dedicates this book to her parents, and it also includes one short story by Rabiya Faridi.

Some of these are heart-breaking stories, but they describe the reality of life in Pakistan today. ‘These stories are based on my observations of life: on the way cruelty is so often inflicted, and the naïve are manipulated,’ she writes. ‘They are my offering in empathy for the times we live in, when life can go terribly wrong. But I hope these stories also show that it is possible to glimpse beauty and joy even in the harshest of circumstances – because there is always hope.’

But her acknowledgement of my creativity is not as a writer, but in a selection of my photographs that she has chosen to illustrate a series of quotations and reflections on her Facebook page for more than a year now, often drawing inspiration from the words of other writers.

These photographs, mainly by the sea, have been taken in Ireland, in Co Limerick, Co Kerry, Co Clare, Co Wexford, and Killiney, Co Dublin, near Lichfield in Staffordshire, in Athens, and in Crete, by the sea in Platanes in Rathymnon, and in Georgioupoli. 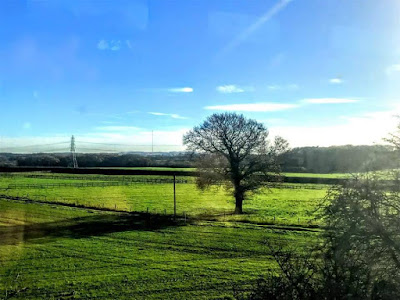 She has used one of my photographs of the English countryside in south Staffordshire, taken near Lichfield last year, to quote the Australian-born American writer Peter Drucker (1909-2005), ‘the founder of modern management,’ who wrote:

A photograph I took last year at sunset in Athens is overlaid with words by the American poet and essayist EE Cummings (1894-1962), who signed himself e e cummings superimposed: ‘You are my sun, moon and all of stars.’

She writes: ‘Nothing like soothing coffee and a nice book of poems. “You are my sun, moon and all of stars.” How sweetly, deeply romantic. Dedicate these timeless lines by e.e. cummings to someone special.’

And she adds, ‘Thanks Patrick for this lovely sunset shot!’ 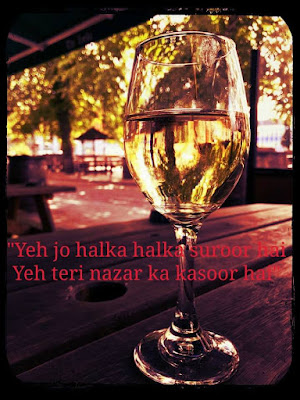 A glass of wine on a table in Limerick in fading sunshine is captioned ‘Unforgettable’ in a tribute to the Pakistani singer, Nusrat Fateh Ali Khan (1948-1997), celebrated as a singer of Qawwali, the devotional music of the Sufis. Jeff Buckley cited Khan as a major influence, saying, ‘He’s my Elvis,’ and performing the first few minutes of Khan’s Yeh Jo Halka Halka Suroor Hai, words Sheba has superimposed on this photograph. 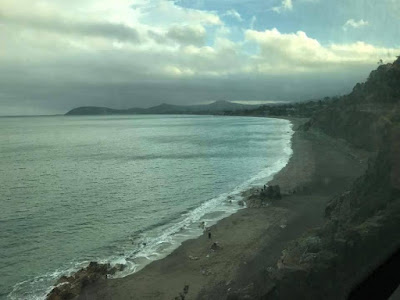 A photograph of Killiney Bay, taken through the window of the Dart on the way to Bray one afternoon last year, is used to illustrate the concept of ‘Poetic Pleasure’ as she quotes the poem ‘Beyond the Sea’ by the English poet Thomas Love Peacock (1785-1866): 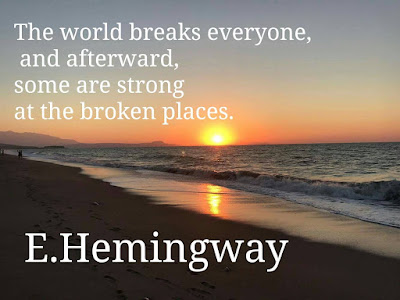 A photograph of sunset on the beach at Platanes, near Rethymnon is linked with a quotation from the American writer Ernest Hemingway (1899-1961), ‘The world breaks everyone, and afterward, some are strong at the broken places.’

This is a popularised version of a well-known quotation from Hemingway. But in a Farewell to Arms, he writes: ‘If people bring so much courage to this world the world has to kill them to break them, so of course it kills them. The world breaks every one and afterward many are strong at the broken places. But those that will not break it kills. It kills the very good and the very gentle and the very brave impartially. If you are none of these you can be sure it will kill you too but there will be no special hurry.’ 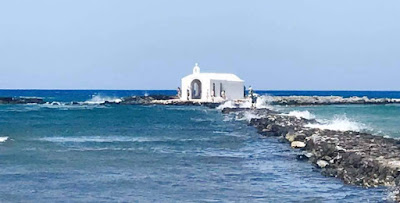 ‘Be Strong & Sieze the Day!’ she says in a caption to a photograph I took in Georgioupoli in Crete as I was walking out a narrow, rocky causeway to a small chapel on a tiny islet.

She wrote, ‘It’s Monday morning & time to start a new week with high energy like the waves unrelenting and the rocks notwithstanding.’ 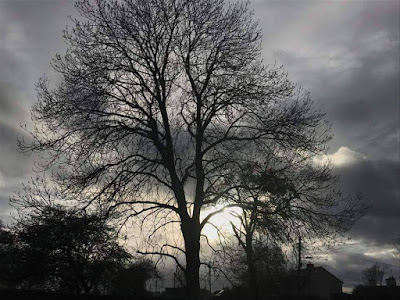 A photograph of the winter sky and bare trees at the Rectory in Askeaton, Co Limerick, accompanies part of the poem Christabel written in 1797 by Samuel Taylor Coleridge (1722-1834):

Is the night chilly and dark?
The night is chilly, but not dark.
The thin gray cloud is spread on high,
It covers but not hides the sky.
The moon is behind, and at the full;
And yet she looks both small and dull.
The night is chill, the cloud is gray:
Tis a month before the month of May,
And the Spring comes slowly up this way. 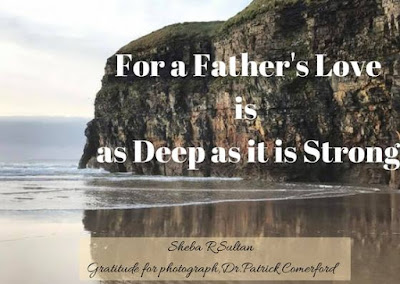 A posting for Father’s Day is illustrated with a photograph of the cliffs and the waves I took during a walk on the beach one Sunday afternoon in Ballybunion, Co Kerry. Her words superimposed on the photograph say: ‘For a Father’s Love is as Deep as it is Strong.’

She describes Father’s Day as ‘a day for our pillars of strength, our fathers. Happy Father’s Day!’ 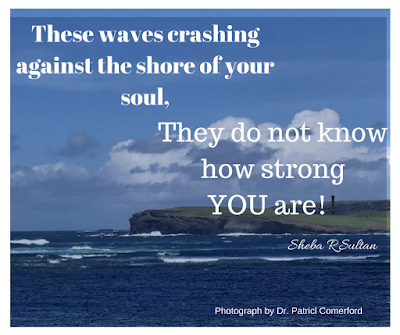 Another photograph of cliffs and waves, taken at Kilkee, Co Clare, carries her words ‘These waves crashing against the shores of your soul, They do not know how strong you are.’

And Sheba adds ‘Be strong because you are strong!’ 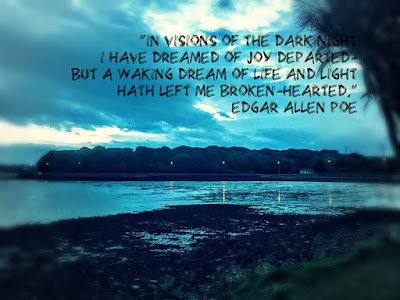 Finally, on a photograph taken at dusk one evening at the mouth of the River Slaney at Ferrycarrig, outside Wexford, she quotes ‘A Dream,’ a poem by Edgar Allen Poe:

In visions of the dark night
I have dreamed of joy departed–
But a waking dream of life and light
Hath left me broken-hearted.

In visions of the dark night
I have dreamed of joy departed –
But a waking dream of life and light
Hath left me broken-hearted.

Ah! what is not a dream by day
To him whose eyes are cast
On things around him with a ray
Turned back upon the past?

That holy dream – that holy dream,
While all the world were chiding,
Hath cheered me as a lovely beam
A lonely spirit guiding.

What though that light, thro’ storm and night,
So trembled from afar –
What could there be more purely bright
In Truth’s day-star?

Certainly, her choice of photographs and poetic quotations indicate the sensitivity found in her short stories in The Room in the Mausoleum and her understanding of the beauty and the heartbreak in the world today.