An evening to talk about
Faith in a Changing Climate 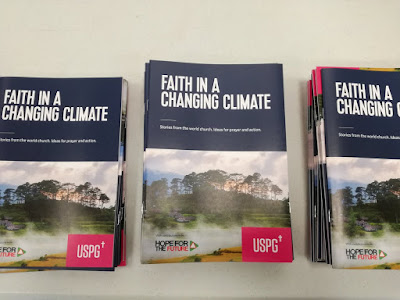 We had an interesting introduction to Christian concerns for the environment last night at an ecumenical meeting organised by the Limerick and Killaloe Diocesan Council for Mission.

He pointed out that one species of animal or plant disappears every day, and spoke of how the world’s wildlife population has declined by 52 per cent.

Climate change since industrial revolution has seen humans putting increasing amounts of greenhouse gases into the climate, especially carbon dioxide, and an increase in global temperatures. It has been hotter in the past, in the time of the dinosaurs, but, I thought, ‘Look at what happened to the dinosaurs.’

Today, tens of millions of people are threatened with death in what some scientists are already warning could be ‘climate genocide.’ The changing climate will create an increase in the numbers of refugees and migrants, and will mean people cannot produce enough food

In Ireland, we are already experiencing an increase in winter storms and changes in temperatures are increasing in frequency and becoming much more common.

The island nation of Tuvalu has nowhere that is more than 6 ft above water, and the whole country is in danger of disappearing.

He quoted the author Lynn White who blames many attitudes and much resistance today on a common Judaeo-Christian interpretation of Genesis 1: 38, which allows people to believe that nature and the environment are there to exploit rather than to care for. Christianity is often anthropocentric, putting humans above nature, with a hierarchical view of creation that we have inherited without thinking about critically.

But there is a better way of thinking Biblically, he told us. Psalm 148 says all creatures are called to praise God and Psalm 96 tells us the seas and the fields praise God.

Speaking of the need to re-examine past ways of thinking about that passage in Genesis, he argued that the concept of dominion is about looking after creation and not about doing what you want to, and to subdue is to enable productivity and not about abusing it.

He pointed out that the Covenant with Noah later in Genesis is a covenant with all living creatures. The Sabbath for the Land, the Jubilee Year, was an important ecological theme, with the land being left fallow for one year in seven.

In the New Testament, Saint Paul speaks of Christ as ‘the firstborn of all creation … by whom and through whom all things were created’ (Colossians 1), and says ‘all creation is groaning … in labour pains’ (Romans 8: 22-23).

In the Incarnation, God becomes part of creation, and in the Resurrection we see the transformation of all creation. The theologian Margaret Daly Denton speaks of how appropriate it is that Mary Magdalene mistakes the Risen Christ for the gardener, for he is the Master gardener of creation, the new Adam in the new Eden.

Care for creation not optional nor is it a hobby, Andrew said, but it is an integral part of the Gospel, and he developed a Trinitarian reflection of God the creator, Jesus the first-born of all creation and the Holy Spirit animating all creation.

We have a unique responsibility for the well-being of creation (Genesis 1: 26, 2: 15) that is not just about stewardship, but about interdependence. The Lord loves righteousness and justice (Psalm 33: 5), so this includes climate justice.

He also spoke of the work of Eco-Church congregations and what can be done in parishes.

We can celebrate environment at Harvest Festivals, in the church’s worship and prayer, in creative worship, the practicalities of the bread we use at the Eucharist, asking where the flowers come from, buying fair trade coffee and tea, selecting appropriate hymns and music, and celebrating Creation time (1 September to 4 October).

Church land can be managed in wildlife friendly ways that include minimal use of weed-killers and insecticides, and that value old trees, hedges, walls and stones. Native plant species benefit wildlife, and he spoke of the value of bird-feeding stations, bird-nest boxes, bat boxes, and piles of leaves that benefit insects and hedgehogs.

He also spoke of Eco-Congregation Awards, and challenged us to consider where we invest money.

In the discussion afterwards, I pointed out that the Anglican Communion’s Fifth Mark of Mission reminds us that God longs for harmony in the whole of Creation, not just in the human family.

There was an opportunity too to talk about Faith in a Changing Climate and other valuable and useful environmental resource from the Anglican mission agency USPG (United Society Partners in the Gospel), of which I am a trustee.

Climate change is a complex subject. For some, the issue seems so big it’s hard to imagine we can do anything to help. Others assume the issue is being dealt with already by the UN, governments and aid agencies.

You can read it here or order printed copies for you and your congregation.

Rachel Parry, USPG Global Relations Director, says: ‘It seems the issue is so huge that many people choose to simply ignore the issues – but this path leads to a dying planet. We need to act now.’

‘To stop climate change, developed countries must be forced to burn less fuel. The solution is simple, but governments are reluctant to take action.’

Find out more and get involved.