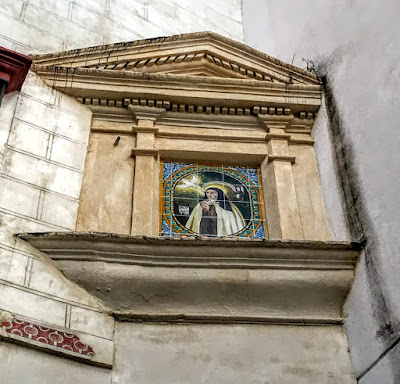 Saint Teresa of Ávila … her image high on a corner of her convent church in Seville (Photograph: Patrick Comerford, 2018)

As I strolled through Seville on my last morning in the city, I wandered through the streets close to Las Casas de la Judería, the hotel where I was staying, and allowed myself to get lost in the maze and the labyrinth.

I had strolled through these streets most days, and always managed to find my way out while stumbling on something new and beguiling each time.

The Plaza de Refinadores (Refiners’ Square) is a small, quiet square, known today for its statue of Don Juan. But some of the burial remains found in the former Jewish cemetery nearby are kept in the basement of the public parking lot here.

The next square, Plaza Santa Cruz, was once the site of the main synagogue, but the building was finally demolished by the French in 1810, making way for the present square.

Nearby, a small paved square known as Las Cruces is dominated by three tall crosses, but there is no sign pointing out that this is the place where thousands of Jews in Seville were persecuted and put to death on the night of 5 June 1391.

In the heart of this Santa Cruz neighbourhood, leading from the Plaza Santa Cruz back towards Ximenez de Enciso and the Jewish Interpretative Centre, Santa Teresa is a narrow winding street, where the landmark attractions include the Bar Las Teresas, with its rows of jamón Iberico hanging from the ceiling.

As I wound my way along this street, I found myself in front of an impressive wooden door in an ornate portal set in an otherwise blank and forbidding wall, with just a few barred windows high above near the roof.

This is the entrance to the Convent of San José, better known as Las Teresas after its founder, Saint Teresa of Ávila (1515-1582). 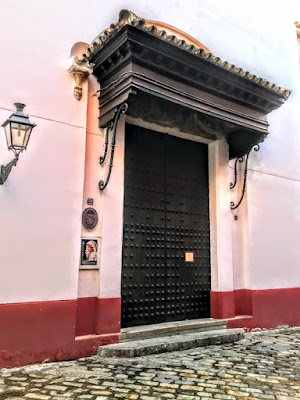 The entrance to the Convent of San José in Seville, better known as Las Teresas after its founder, Saint Teresa of Ávila (Photograph: Patrick Comerford, 2018)

Saint Teresa is a prominent saint and theologians, a mystic, writer and reformer of the Carmelite nuns, and one of the few women honoured as a ‘Doctor of the Church,’ alongside Saint Catherine of Siena, Saint Hildegard of Bingen and Saint Thérèse of Lisieux.

Saint Teresa of Ávila was born Teresa Sánchez de Cepeda y Ahumada in 1515 in Ávila, a small town between Madrid and Salamanca. Her grandfather, Juan Sánchez de Toledo, was a marrano, a pejorative term for a Jew who had been forcibly converted to Christianity, and who had been brought before the Spanish Inquisition in Toledo in 1485 – seven years before the final expulsion of all Jews from Spain – accused of returning to the Jewish faith.

Juan Sánchez de Toledo was condemned to wear in procession for six weeks the sanbenito or yellow garment of those condemned by the Inquisition. Later, as was custom, his sanbenito was hung in the cathedral as a reminder of his public disgrace.

Her father, however, moved to a more tolerant climate in Ávila, where he tried to hide his family’s Jewish origins, and successfully integrated into society.

Teresa’s mother died when Teresa was 14, and she was sent to be educated by the Augustinian nuns in Ávila. At the age of 20 she entered the Monastery of the Incarnation of the Carmelites, a contemplative order that claimed it was founded on Mount Carmel in the 12th century.

In the convent, she experienced the ecstatic religious trances for which she is best known, and developed the mysticism that inspired her writings.

In her 40s she felt compelled to reform her order, adopting more austere rules and spending more time in mental prayer. She started a new convent in Ávila in 1562, and went on to found 17 others throughout Spain in a 20-year reform movement. 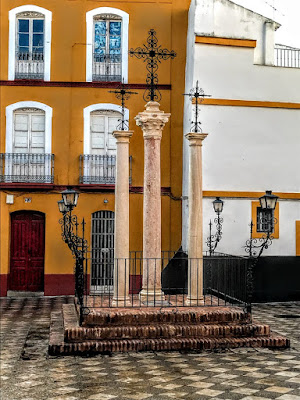 The three crosses in Las Cruces, where thousands of Jews of Seville were put to death in 1391 (Photograph: Patrick Comerford, 2018)

On 26 May 1575, Saint Teresa arrived in Seville with a few nuns to found her eleventh convent. They found a house on Calle Zaragoza, near the cathedral, and the community stayed for 10 years.

At the time, Seville was the biggest city in Spain and the main port to the Indies. The city was experiencing its ‘Golden Age’ at the height of trade with the Americas. Besides the Cathedral, there were 30 parish churches, more than 100 hospitals and chapels and representatives from every religious order.

On the other side of the Guadalquivir River, the Castle of San Jorge was home to the Court of the Inquisition and the Carthusian Monastery, which she visited while she was living in Seville.

However, the location of this convent was never satisfactory. Zaragoza was one of the main streets leading down to the port, a noisy place with taverns frequented by sailors and traders.

Eventually, with the help of Saint John of the Cross, Teresa and her companions bought a property in Calle Santa Teresa to build a new home. Her brother Lorenzo, who had been the colonial treasurer in Quito in Peru, had returned to Spain and also helped to finance her new convent in Seville.

Her fellow-Carmelite Saint John of the Cross (1542-1591) was also a major figure in the Counter-Reformation and a mystic, and is also recognised as a Doctor of the Church. Born Juan de Yepes y Álvarez near Ávila, he too was a member of a converso family, descended from Jews forced to convert to Christianity.

Teresa, however, never saw her order’s new home. While travelling in northern Spain in 1582, she was taken ill and died. In a strange turn of history, she died on the night when the Church was switching from the Julian Calendar to the Gregorian calendar, with the removal of the dates 5 to 14 October that year. She died either late in the evening of 4 October (Julian), or in the early hours of 15 October (Gregorian), at the age of 67.

The Convent of San José, or Las Teresas, is not open to the public but holds a number of relics, including the only portrait of Saint Teresa painted while she was alive and the original manuscript of her best-known work, Las Moradas or The Interior Castle.

Saint Teresa was beatified in 1614 and canonised in 1622. Many recent studies have pointed to the role of Judaism in her intellectual and religious journey, from Rosa Rossi’s recent biography (2013) to research by Professor Teófanes Egido López of Valladolid University, and the Carmelite theologian Cristiana Dobner.

An exhibit in the Jewish Interpretative Centre, around the corner from Las Teresas, points out how an ordinance was approved in Toledo in 1449, excluding converts of Jewish origin from holding public office in the city. This was the first of the ‘statutes of purity of blood’ that excluded Jewish converts from the military, higher education, and civil and church offices.

The statutes were soon extended to most religious orders, first to the Order of Saint Jerome, later the Dominicans, then the Franciscans, and lastly the Jesuits. For several centuries, these rules were applied to religious orders, diocesan chapters and other civic and church bodies. All candidates for membership were forced to go through an exhaustive investigation to prove none of their ancestors was from a ‘stained race.’

The statues became a breeding ground for extending suspicion, envy, accusations and blackmail. A special group was set up in Seville, los Linajudos, dedicated exclusively to extort money from converts and their descendants by researching their ancestry. 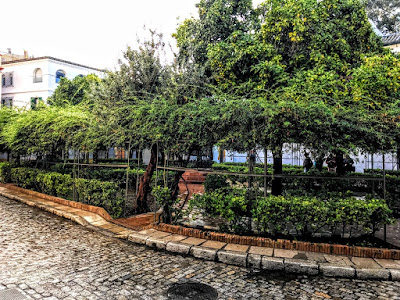 Let nothing disturb you,
Let nothing frighten you,
All things pass:
God never changes.
Patience obtains all things.
Whoever has God
Lacks nothing;
God alone suffices. 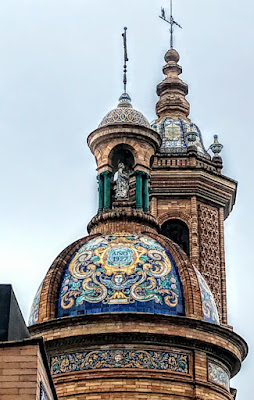 The site of the Castle of San Jorge and the Court of the Inquisition in Seville on the west bank of the Guadalquivir River (Photograph: Patrick Comerford, 2018)