‘I said to Dawn: Be sudden—to Eve: Be soon’ … dawn on the River Slaney at Ferrycarrig, Co Wexford (Photograph: Patrick Comerford, 2019; click on images for full-screen viewing)

During a series of workshops in the Rectory in Askeaton yesterday [4 March 2019] on ‘The Adventure of Prayer’ and ‘Faith Development,’ some of us ended up discussing ‘The Hound of Heaven’ by the English poet and mystic Francis Thompson (1859-1907). It seemed so appropriate to be discussing this poem as we prepare for the beginning of Lent tomorrow on Ash Wednesday [6 March 2019].

He was sent to Ushaw College, a seminary near Durham, before studying medicine at Owens College, now the University of Manchester. But he had no interest in his medical studies and never practised as a doctor.

Penniless, he fled to London in 1885, and he tried to make a living as a writer. There he became an opium addict and spent three years up living on the streets. He thought of suicide, but said he saved through a vision he believed to be Thomas Chatterton (1752-1770), a Bristol poet who had died by suicide at the age of 17.

After three years on the streets on London, he was rescued in 1888 by the Catholic writers Wilfrid and Alice Meynell, after sending his poetry to their magazine Merrie England. They took him into their home and sent him to spend some time at Our Lady of England Priory, Storrington, for a couple of years.

Francis Thompson wrote most of his poetry during this period (1888-1897), and then turned to writing prose. The Meynells published his first book, Poems, in 1893. Thompson died of tuberculosis on 13 November 1907. He is buried in Saint Mary’s Cemetery, Kensal Green. Shortly after his death, GK Chesterton said that ‘with Francis Thompson we lost the greatest poetic energy since Browning.’

‘The Hound of Heaven,’ the source of much of Thompson’s posthumous reputation, is a 182-line poem describing the pursuit of the soul by God. One Bishop of London described this as ‘one of the most tremendous poems ever written.’ Critics said it was ‘the most wonderful lyric in the language.’ The London Times believed people would still be learning this poem 200 years later.

His devotees included a young JRR Tolkien, who later said a volume of Thompson’s poems he bought in 1913-1914 was an important influence on his writing.

Katherine A Powers of the Boston Globe, says Thompson’s ‘medical training and life on the streets gave him a gritty view of reality and a social conscience, and his governing idea that God is immanent in all things and in all experience, so vexatious to both Victorians and the Vatican alike, no longer strikes an alien or heretical note.’ 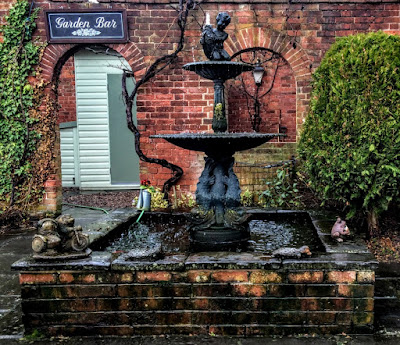 ‘And now my heart is as a broken fount’ … the fountain at the Hedgehog in Lichfield (Photograph: Patrick Comerford)

‘The Hound of Heaven’ by Francis Thompson

I fled Him, down the nights and down the days;
I fled Him, down the arches of the years;
I fled Him, down the labyrinthine ways
Of my own mind; and in the mist of tears
I hid from Him, and under running laughter.
Up vistaed hopes I sped;
And shot, precipitated,
Adown Titanic glooms of chasmèd fears,
From those strong Feet that followed, followed after.
But with unhurrying chase,
And unperturbèd pace,
Deliberate speed, majestic instancy,
They beat—and a Voice beat
More instant than the Feet—
‘All things betray thee, who betrayest Me.’

I pleaded, outlaw-wise,
By many a hearted casement, curtained red,
Trellised with intertwining charities;
(For, though I knew His love Who followèd,
Yet was I sore adread
Lest, having Him, I must have naught beside).
But, if one little casement parted wide,
The gust of His approach would clash it to.
Fear wist not to evade, as Love wist to pursue.
Across the margent of the world I fled,
And troubled the gold gateways of the stars,
Smiting for shelter on their clangèd bars;
Fretted to dulcet jars
And silvern chatter the pale ports o’ the moon.
I said to Dawn: Be sudden—to Eve: Be soon;
With thy young skiey blossoms heap me over
From this tremendous Lover—
Float thy vague veil about me, lest He see!
I tempted all His servitors, but to find
My own betrayal in their constancy,
In faith to Him their fickleness to me,
Their traitorous trueness, and their loyal deceit.
To all swift things for swiftness did I sue;
Clung to the whistling mane of every wind.
But whether they swept, smoothly fleet,
The long savannahs of the blue;
Or whether, Thunder-driven,
They clanged his chariot ’thwart a heaven,
Plashy with flying lightnings round the spurn o’ their feet:—
Fear wist not to evade as Love wist to pursue.
Still with unhurrying chase,
And unperturbèd pace,
Deliberate speed, majestic instancy,
Came on the following Feet,
And a Voice above their beat—
‘Naught shelters thee, who wilt not shelter Me.’

I sought no more that after which I strayed
In face of man or maid;
But still within the little children’s eyes
Seems something, something that replies,
They at least are for me, surely for me!
I turned me to them very wistfully;
But just as their young eyes grew sudden fair
With dawning answers there,
Their angel plucked them from me by the hair.
‘Come then, ye other children, Nature’s—share
With me’ (said I) ‘your delicate fellowship;
Let me greet you lip to lip,
Let me twine with you caresses,
Wantoning
With our Lady-Mother’s vagrant tresses,
Banqueting
With her in her wind-walled palace,
Underneath her azured daïs,
Quaffing, as your taintless way is,
From a chalice
Lucent-weeping out of the dayspring.’
So it was done:
I in their delicate fellowship was one—
Drew the bolt of Nature’s secrecies.
I knew all the swift importings
On the wilful face of skies;
I knew how the clouds arise
Spumèd of the wild sea-snortings;
All that’s born or dies
Rose and drooped with; made them shapers
Of mine own moods, or wailful or divine;
With them joyed and was bereaven.
I was heavy with the even,
When she lit her glimmering tapers
Round the day’s dead sanctities.
I laughed in the morning’s eyes.
I triumphed and I saddened with all weather,
Heaven and I wept together,
And its sweet tears were salt with mortal mine;
Against the red throb of its sunset-heart
I laid my own to beat,
And share commingling heat;
But not by that, by that, was eased my human smart.
In vain my tears were wet on Heaven’s grey cheek.
For ah! we know not what each other says,
These things and I; in sound I speak—
Their sound is but their stir, they speak by silences.
Nature, poor stepdame, cannot slake my drouth;
Let her, if she would owe me,
Drop yon blue bosom-veil of sky, and show me
The breasts o’ her tenderness:
Never did any milk of hers once bless
My thirsting mouth.
Nigh and nigh draws the chase,
With unperturbèd pace,
Deliberate speed, majestic instancy;
And past those noisèd Feet
A voice comes yet more fleet—
‘Lo! naught contents thee, who content’st not Me!’
Naked I wait Thy love’s uplifted stroke!
My harness piece by piece Thou hast hewn from me,
And smitten me to my knee;
I am defenceless utterly.
I slept, methinks, and woke,
And, slowly gazing, find me stripped in sleep.
In the rash lustihead of my young powers,
I shook the pillaring hours
And pulled my life upon me; grimed with smears,
I stand amid the dust o’ the mounded years—
My mangled youth lies dead beneath the heap.
My days have crackled and gone up in smoke,
Have puffed and burst as sun-starts on a stream.
Yea, faileth now even dream
The dreamer, and the lute the lutanist;
Even the linked fantasies, in whose blossomy twist
I swung the earth a trinket at my wrist,
Are yielding; cords of all too weak account
For earth with heavy griefs so overplussed.
Ah! is Thy love indeed
A weed, albeit an amaranthine weed,
Suffering no flowers except its own to mount?
Ah! must—
Designer infinite!—
Ah! must Thou char the wood ere Thou canst limn with it?
My freshness spent its wavering shower i’ the dust;
And now my heart is as a broken fount,
Wherein tear-drippings stagnate, spilt down ever
From the dank thoughts that shiver
Upon the sighful branches of my mind.
Such is; what is to be?
The pulp so bitter, how shall taste the rind?
I dimly guess what Time in mists confounds;
Yet ever and anon a trumpet sounds
From the hid battlements of Eternity;
Those shaken mists a space unsettle, then
Round the half-glimpsèd turrets slowly wash again.
But not ere him who summoneth
I first have seen, enwound
With glooming robes purpureal, cypress-crowned;
His name I know, and what his trumpet saith.
Whether man’s heart or life it be which yields
Thee harvest, must Thy harvest-fields
Be dunged with rotten death?

Now of that long pursuit
Comes on at hand the bruit;
That Voice is round me like a bursting sea:
‘And is thy earth so marred,
Shattered in shard on shard?
Lo, all things fly thee, for thou fliest Me!
Strange, piteous, futile thing!
Wherefore should any set thee love apart?
Seeing none but I makes much of naught’ (He said),
‘And human love needs human meriting:
How hast thou merited—
Of all man’s clotted clay the dingiest clot?
Alack, thou knowest not
How little worthy of any love thou art!
Whom wilt thou find to love ignoble thee,
Save Me, save only Me?
All which I took from thee I did but take,
Not for thy harms,
But just that thou might’st seek it in My arms.
All which thy child’s mistake
Fancies as lost, I have stored for thee at home:
Rise, clasp My hand, and come!’
Halts by me that footfall:
Is my gloom, after all,
Shade of His hand, outstretched caressingly?
‘Ah, fondest, blindest, weakest,
I am He Whom thou seekest!
Thou dravest love from thee, who dravest Me.’

‘Suffering no flowers except its own to mount’ … a blanket of flowers on the ground at the Hedgehog in Lichfield (Photograph: Patrick Comerford)