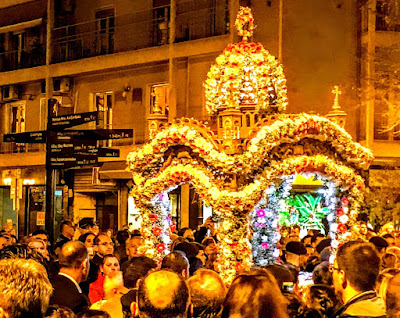 Carrying the bier with the Epitaphios through the streets of Thessaloniki on Good Friday last year (Photograph: Patrick Comerford)

I am in Rethymnon in Crete, celebrating Greek Orthodox Holy Week and Easter this weekend. I did the same in Thessaloniki last year, when the Orthodox dates also fell a week later in the calendar than they did in the West.

But many people ask me is Easter always a week later in Greece, does it ever fall on the same day, and why is there a difference. Why is Greek Easter on a different date so often?

Although most of the world now follows the Gregorian calendar, the Eastern Orthodox Church still uses the earlier Julian calendar for calculating the dates of festivals such as Easter that are not fixed.

The fasting of Lent is continuing in Greece throughout this week as Holy Week.

The preparations for Easter begin today on Thursday. Easter bread (τσουρέκι, tsoureki) is baked and eggs are coloured with red dye, because red is the colour of life and also symbolises the blood of Christ.

Tomorrow, Good Friday is a day of mourning. The most devout do not eat or cook at all, and if any cooking is done, it is only simple foods such as tahini soup. Flowers are taken to churches to decorate the Epitaphios (Ἐπιτάφιος), a bier with a representation of the body of Christ, which is carried in a procession later in the day during a Service of Lamentation.

On Saturday, many families prepare mayiritsa (μαγειρίτσα), a soup made from lamb or goat kid – or, perhaps, chicken – offal and tripe, cooked on the stove with onions and herbs, and with an egg and lemon sauce that are mixed in at the end. Usually it is left on a low heat when everyone goes to church in the evening so it can be eaten when they get back.

On Saturday evening, people go to church with special white candles that are lit just before midnight as the ‘Eternal Flame’ on the altar behind the icon screen passes rapidly through the people. At midnight, the whole of Greece comes to life to the sound and sight of church bells, ships’ horns, floodlights and fireworks.

After midnight, as Easter Day begins, there are early morning prayer services and a celebration of the Divine Liturgy or the Eucharist.

Traditionally, people carry their flame home and use it to light other candles in the house. Families then gather around the table and break their fast with soup, bread and eggs.

On Easter morning, a meal of roast lamb is eaten in many households at a feast of eating and drinking that continues until well into the night.

But, I never answered: why is Orthodox Easter usually on a date that is different than Easter in Ireland, England, or most of the rest of the world?

Of course, the Gospel accounts of the Crucifixion and the Resurrection do not give us a precise date that matches our modern calendar

The problems go back to the year 325 AD, when the Church held the First Ecumenical Council, or the Council of Nicaea. Before then, churches celebrated Easter at various times.

To bring unity among the churches, the Church Fathers at Nicaea produced a formula to calculate a date for Easter that would be accepted throughout the Church. They agreed that Easter would be celebrated on the first Sunday that occurs after the Paschal full moon or first full moon that follows the vernal or Spring equinox, but always after Jewish Passover.

For calculation purposes, the full moon is always set on the 14th day of the lunar month. The lunar month begins with the new moon. For the same reason, the Church set the date of the spring equinox at 21 March, even though the actual vernal equinox can occur on 20 March.

These two approximations allowed the Church to set one universal date for Easter, regardless of when we observe the paschal full moon in our time zones. The Church Fathers at Nicaea hoped this system would guarantee that all parts of the Church could celebrate Easter together on the same day.

Why, though, did they select the Vernal Equinox?

Before the invention of calendars and other modern methods of tracking years and seasons, people relied on the position of the sun in the sky and obvious signs in nature to indicate the passing of time. When the equator and the hemispheres of the Earth became common knowledge, it was understood that the slightly tilted rotation of the earth causes different hemispheres to experience different seasons. While one hemisphere experiences spring and summer, the other hemisphere experiences autumn and winter.

When day and night are of the same length of time it is called an equinox. The vernal equinox occurs in the Northern Hemispheres in late March, bringing spring to these parts of the earth. The council chose this equinox, fixed on 21 March as part of the calculation to ensure Easter would be celebrated in the spring at the same time. But, of course the actual Spring Equinox can fall on 19, 20 or 21 March.)

The Jewish Passover is celebrated on the 15th day of the month of Nisan, which is the first month of the year for the Jewish calendar. It is a time practicing Jews celebrate the Feast of Unleavened Bread in commemoration of God freeing the people from slavery in Egypt. Passover is celebrated for eight days, with many ceremonial traditions, and is one of three important Jewish annual holidays.

The Church Fathers believed it was important for the Church to celebrate Easter after the Passover in order to preserve the sequence of events leading up to the Crucifixion and Resurrection.

According to the timeline in the Synoptic Gospels (Saint Matthew, Saint Mark, Saint Luke), Christ celebrates the Passover with his followers at the last Supper on the night before he was crucified. According to Saint John’s Gospel, Christ is crucified on the day the Passover is being celebrated. In either case, celebrating the Resurrection before the Passover would dislocate the original sequence of events.

Many people are mistaken in thinking that the date of Easter is determined by the date of Passover, and so they are surprised when Western Christians sometimes celebrate Easter before the Jewish celebration of Passover. Passover was relatively late this year and was celebrated last Friday night, 19 April, and ends on Saturday, 27 April.

At the Council of Nicaea, the Church Fathers thought they had finalised a universally accepted date for Easter. For decades, the church in Rome and in Alexandria relied on different calculations by astronomers and mathematicians using different observations and calculations. Even in the western church, matters were not settled to the satisfaction of everyone. The ‘Insular’ or Celtic churches refused to calculate Easter using a full moon that was observed after midnight, which seemed to celebrate darkness rather than light.

The debate over the date to celebrate the most significant feast in the Christian calendar caused visible disunity in the royal household in Northumbria: Queen Eanfled and her court observed Easter on a different day than did King Oswiu; while one royal faction was celebrating Easter, the other was still fasting during Lent.

The debate was settled at the Synod of Whitby in the year 664, when the Roman practices was imposed on those who had followed the Irish practice, including calculating the date of Easter and the style of the monastic tonsure.

However, no-one had foreseen the Great Schism that divided the Church in 1054, and how this would change the equations.

The Roman Empire was already divided between the Eastern Byzantine and Western Roman Empires, with their own emperors. Although the church tried to maintain its unity, it soon divided too.

Although the churches were divided on several issues, they still believed Easter should be celebrated on the first Sunday after the first full moon to follow the vernal equinox. However, the western church no longer found Easter had to fall after Passover.

Because of the date differences between the Julian and Gregorian calendar, the Orthodox celebration of Easter always occurs after the Jewish celebration of Passover.

The two churches consequently found that in most years they were celebrating the same Easter holiday on two different days. While one Church was in a celebratory mood, the other was still going through the fasts and disciplines of Lent.

The Orthodox Easter now falls anywhere between 4 April and 8 May and the western Easter can fall anywhere between 22 March and 25 April. In rare instances, the dates align, and we celebrate Easter simultaneously. However, because of the way the two calendars work, this will not happen again for another quarter century – not until 2034.

But this year, I have a second opportunity to celebrate Easter and the Resurrection in Platanias and Tsesmes in Rethymnon.