A week in Crete to
celebrate Easter
for a second time 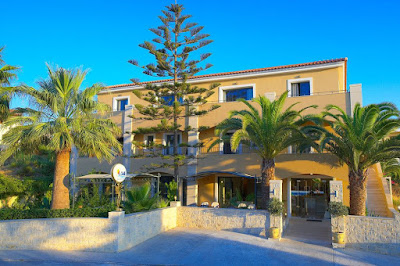 La Stella Hotel, near Rethymnon, is on the road leading from Platanias up to the smaller village of Tsesmés

After some busy weeks in parish throughout Lent, Holy Week and Easter, I am back in Crete for a week and – because Easter is a week later in the Orthodox calendar – an opportunity to experience Good Friday and Easter Day for a second time once again this year.

Last year, two of us celebrated Greek Easter which was a week later in 2018 too, during a week’s break in Thessaloniki. But this time I am back in Crete, and staying near Rethymnon, the Venetian and university town that I have known since the 1980s.

I arrived at Chania airport late last night [24 April 2019] on a Ryanair flight from Dublin, and it was a 65 km transfer to La Stella, a boutique hotel in Platanias, where we are staying for the next week.

Two decades ago, Platanias was an unremarkable suburb of Rethymnon on the old road between Rethymnon and Iraklio. But it has grown and developed over the last 20 or 25 years, and there is a number of luxury hotels here too, as well as the usual Greek rent rooms and pensions in the centre of the resort.

This is my fifth time since 2015 to stay in this part of Rethymon. I have stayed both Julia Apartments and the Varvaras Diamond Hotel in previous years. But for this Easter, I am staying in La Stella Hotel, on the road leading from Platanias up to the smaller village of Tsesmés.

La Stella is a comfortable boutique hotel, with two swimming pools, a pool or snack bar, a breakfast area, games room and night bar, with chill-out lounges scattered all over the place. It was rebuilt in 2007 and renovated and upgraded again in 2011, and offers 27 apartments or suites, including 13 one-room studios, 12 two-room apartments and two three-room suites.

It is just a short walk from here to the pretty village of Tsesmés, with its quiet tavernas. Restaurants like Pagona’s Place have a unique cuisine, brought here almost a century ago by the ancestors of the families living here today as they fled the persecution of Greek-speaking people in Cesmes in Anatolia.

The name of the road from here up to Tsesmes recalls the mainly Greek town of Nikomedeia (Νικομήδεια), now İzmit, about 100 km east of Istanbul, in the north-west part of Anatolia. An Allied report on 1 June 1921 described the Turkish atrocities in Izmit as ‘considerable and ferocious.’

Nearby are other pretty, traditional villages such as Adele, or Maroulas, with its Venetian tower houses and churches, and Arkadi with its historically important monastery is 17 km to the south.

During this week, I plan to visit Rethymnon tomorrow [26 April 2019] for the Good Friday liturgies, including the procession of the Epitaphios through the city, and to attend the late-night Easter Liturgy in the parish church in Tsesmés on Saturday night [27 April 2019].

I hope this week to also visit a place that is making a difference and bringing about change for vulnerable lives. In the back streets, away from the gaze of tourists, the Voluntary Welfare Clinic Rethymno (Εθελοντικό Ιατρείο Κοινωνικής Αλληλεγγύης Ρεθύμνου) works in Kastrinogiannaki, a narrow side-street where there are no tourist shops, yet only a few steps away from the seafront, the restaurants and the bars.

They refuse to call themselves a charity, because they see health care as a human right. The clinic is open to all people without access to health care. It is a gesture of solidarity by experts and professionals who have already seen their own salaries and incomes cut in public spending cuts and in the decline in the Greek economy. Some of the hidden work here also includes helping refugees and migrants trace missing family members. But they are hard-pressed, the workload is heavy, and the numbers needing attention continue to grow.

During the week, I may also visit a monastery or convent, go for walks on the beach, visit icon workshops, meet old friends, browse in the bookshops, ramble around archaeological sites, seek out churches, buildings and streets of architectural and historical interest, and enjoy long lazy lunches in the sun and dinners in the sunset.

And – if the water is warm enough – I may even swim in the Mediterranean. But the temperatures here are in the low and mid 20s during the day, so it’s not much warmer than Askeaton last weekend.

I am about to head off to breakfast now. But join me over the next week as I reacquaint myself with places I now know so well but also explore new corners of Crete, try to get up to speed with Greek politics and even brush up on my rusty acquaintance with the Greek language. 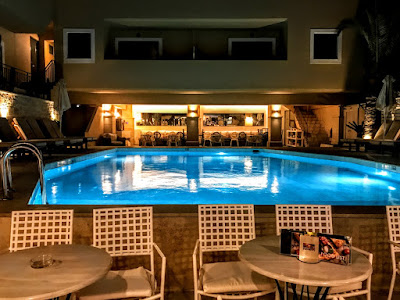 I am hoping the weather is warm enough this week to go for a swim (Photograph: Patrick Comerford, 2019)