Bogside Murals tell
stories of a half
century of conflict 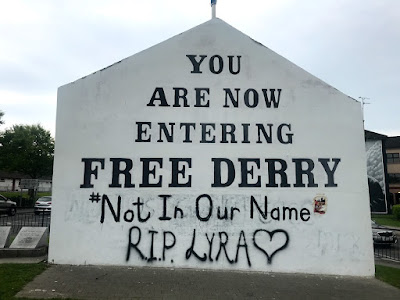 The General Synod of the Church of Ireland is taking place this week in the Millennium Forum in Derry. This is such a compact city that it is easy during breaks to take a walk from here to many interesting points, including the Guildhall, the City Walls, Saint Columb’s Cathedral, ‘Free Derry Corner’ and the Bogside Murals on Rossville Street.

‘Free Derry Corner’ is a well-known landmark in the Bogside area, standing at the junction of Lecky Road, Rossville Street and Fahan Street. This free-standing gable wall recalls Free Derry, an autonomous area that existed in 1969-1972.

In January 1969, a local activist, long believed to be John ‘Caker’ Casey, but who may have been Liam Hillen, painted graffiti on a gable wall at the end of a terrace of houses, declaring: ‘You are now entering Free Derry.’

When the then British Home Secretary and future Prime Minister Jim Callaghan visited Derry in August 1969, the ‘Free Derry’ wall was painted white and the sign proclaiming ‘You are now entering Free Derry’ was professionally repainted in black lettering by John ‘Caker’ Casey. The area in front of the wall became known as Free Derry Corner.

This part of Derry and the surrounding streets were the scene of the Battle of the Bogside in 1969 and Bloody Sunday in 1972. The houses on Lecky Road and Fahan Street were later demolished, but the ‘Free Derry Wall’ was retained.

Despite demolition, and new roads, the wall still stands and has been repainted at frequent intervals. It now stands in the central reservation of a dual carriageway on Lecky Road, and is constantly the focus for large numbers of tourists on walking tours of the Bogside.

Last month, following the murder of Lyra McKee late on Maundy Thursday [18 April 2019], Free Derry Corner was repainted to include the words ‘not in our name – RIP Lyra’ to reflect community revulsion at her murder.

The Bogside walking tours also introduce tourists to the Bogside Murals, a series of outdoor murals also known as the ‘People’s Gallery.’ They are the work of three mural painters from Derry, brothers Tom and William Kelly, and Kevin Hasson.

The Bogside Artists began working together in 1993. With supplies donated from local residents, they painted several murals on the walls of Rossville Street buildings commemorating the Battle of Bogside and Bloody Sunday.

From 1994 to 2008, they painted 12 murals on Rossville Street, which runs through the centre of the Bogside, and they named it the ‘People’s Gallery.’ Thousands of visitors come each day to see this unique visual display and an entire street devoted to the history in art form of over three decades of political conflict in Northern Ireland.

The murals were officially inaugurated in August 2007 and an additional mural dedicated to Nobel Peace Prize Laureate and retired leader of the Social Democratic and Labour Party, John Hume was completed in 2008.

The Bogside Artists see their work as humanitarian and human, as ‘men speaking to men,’ according to Tom Kelly, and say they have little time or interest in contemporary art. ‘All real art is contemporary as it has its origins in the truthful state of mind which is timeless,’ he has said. 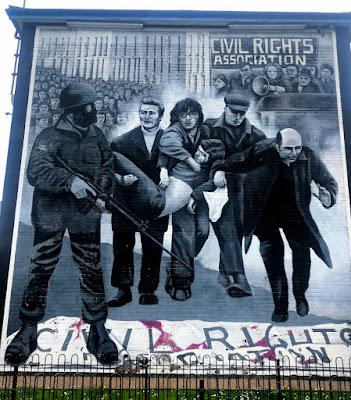 The ‘Blood Sunday’ mural depicts events in Derry on ‘Bloody Sunday’ on 30 January 1972, when the army opened fire on a Civil Rights protest and killed 14 people. The mural shows a group of men, led by a local Catholic priest, later Bishop Edward Daly, carrying the body of Jackie Duddy from the scene of the shooting.

In the background, marchers are carrying a civil rights banner. This banner became bloodstained when it was used to cover the body of one of the victims. The mural was painted in 1997 to mark the 25th anniversary of ‘Bloody Sunday’ on 30 January 1972. 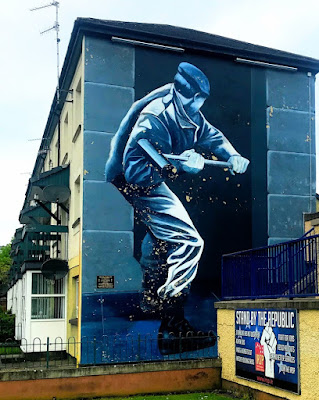 The ‘Civil Rights’ Mural on Rossville Street was unveiled in 2004 (Photograph: Patrick Comerford, 2019)

The ‘Civil Rights’ Mural on Rossville Street, unveiled in 2004, marks the beginning of the Civil Rights movement in Derry. These early marches were inspired by the civil disobedience campaigns of Martin Luther King, but the march on 5 October 1968 ended in bloodshed in Duke Street when the RUC began beating up the protesters.

The events that day were filmed by television crews and were broadcast across the world. 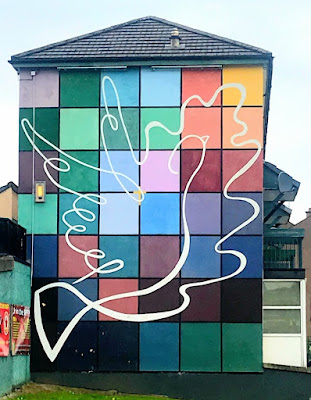 The Peace Mural on Rossville Street was completed in 2004 (Photograph: Patrick Comerford, 2019)

The Peace Mural on Rossville Street was completed on 30 July 2004 and was unveiled by the then Mayor of Derry. 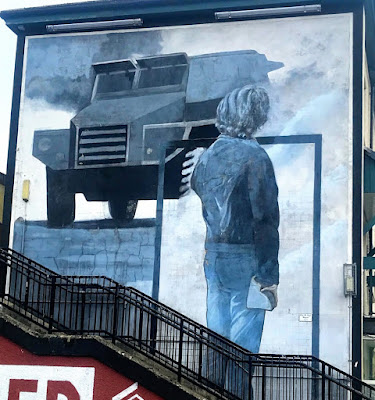 The ‘Saturday Matinee’ mural on Rossville Street was started in August 2001. The scene depicted is typical of many riots in the Bogside from 1969 through the early 1970s. The riots were commonplace with many happening on Saturday afternoons, hence the title ‘The Saturday Matinee.’ 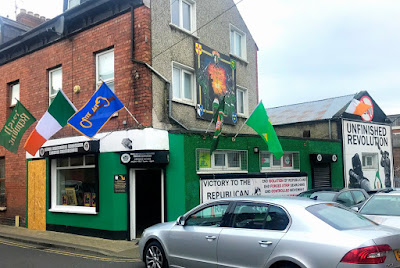 The ‘blood on their hands’ protest has been wiped away in Chamberlain Street (Photograph: Patrick Comerford, 2019)

A very different type of mural was created nearby on Chamberlain Street by friends of Lyra McKee during their protest last month at the headquarters of the dissident republican group Saoradh, linked to the ‘New IRA.’

Lyra McKee’s friends gathered at ‘Junior McDaid House,’ placed their hands in red paint and imprinted them on the walls of the building.

One of Lyra’s friends, Sinead Quinn, said at the time: ‘We have used red paint because they have blood on their hands for what has happened.’

Since then, however, this latest act of political street art has been wiped off the walls by supporters of Saroadh and the ‘New IRA,’ and the walls of the house have been freshly painted in defiance of the community revulsion at this latest murder on the streets of Derry. 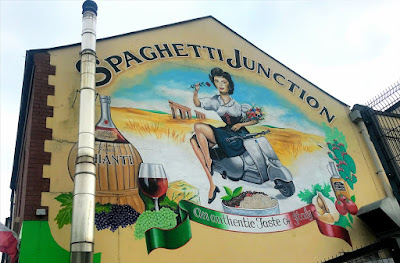 A very different type of mural in Derry offers a taste of Italy (Photograph: Patrick Comerford, 2019)