Brutus Babington, briefly
Bishop of Derry while he
was a canon of Lichfield 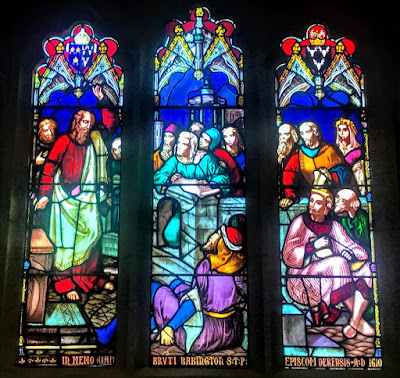 The Brutus Babington memorial window in the north aisle of Saint Columb’s Cathedral, Derry … he remained a canon of Lichfield Cathedral while he was Bishop of Derry (Photograph: Patrick Comerford, 2019)

During the General Synod’s opening celebration of the Eucharist in Saint Columb’s Cathedral this week, I found myself sitting close to the window in the north aisle commemorating Bishop Brutus Babington (1558-1611).

This stained-glass window by William Wailes (1808-1881) of Newcastle-upon-Tyne was installed in 1862 and depicts Saint Paul at Athens. Wailes ran one of the largest and most prolific stained glass workshops in Victorian England. He had studied with Mayer of Munich and later worked closely with AWN Pugin. His famous works include the windows of Gloucester Cathedral, the East Window in Saint Editha’s Church, Tamworth, the Transfiguration East Window in Saint Saviour’s Dominican Church, Limerick, and many of the windows in Saint Mary’s Church, Killarney.

Wailes also designed the window in Saint Columb’s Cathedral erected in memory of Brutus or Brute Babington, who was Bishop of Derry for a few months from his consecration in 1610 until he died on 10 September 1611.

Brutus Babington was a canon of Lichfield Cathedral, and I wondered whether he was related to the Babington family who were closely related to the Comberford family. Members of that family included Anthony Babington who, at the age of 24, was hung drawn and quartered on Tower Hill in London in 1586 for his part in the plot to murder Queen Elizabeth and put Mary Queen of Scots on the throne of England, and his cousin, the Revd Canon Dr Zachary Babington (1549-1613), who was a Master of Saint John’s Hospital, Lichfield (1587-1613).

So, I returned to have a second look at two Babington windows in Derry yesterday morning [17 May 2019], and did a little more research on Brutus Babington and his links with Lichfield. 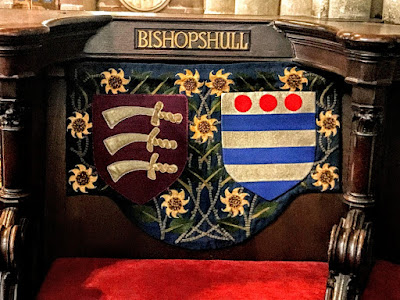 The stall of the Prebendary of Bishopshull in the chapter stalls of Lichfield Cathedral (Photograph: Patrick Comerford, 2018)

Brutus Babington was born in Cheshire, the son of Richard Babington and Anne Starkey. He was admitted to Christ’s College, Cambridge, where he matriculated in 1572. He graduated BA in 1576, was ordained priest by the Bishop of Chester in 1577, and was a Fellow of Christ’s College (1577-1584) and university preacher 1582. He received his MA through Saint John’s College, Cambridge, in 1579 and the degree BD in 1586.

When George Boleyn, Dean of Lichfield (1576-1603), died in 1603, Babington applied for the Deanery of Lichfield but was unsuccessful. Later that year, he complained to Gilbert Talbot, 7th Earl of Shrewsbury, that the Chancellor of the Diocese of Lichfield, Canon Zachary Babington, who was also Master of Saint John’s Hospital, Lichfield, had obstructed his suit and dispossessed him of his divinity lectureship.

But Babington’s ambitions were unquenched. George Montgomery, who was criticised for his record as Bishop of Derry, was moved to the Diocese of Meath in 1609. Within a few months, Babington was nominated as Bishop of Derry, despite some opposition from the supporters of the Dean of Derry, William Webb. Babington was seen as an advocate of a persuasive missionary approach to convert Irish Catholics, and his nomination had the support of King James and the Privy Council.

He was consecrated bishop at Drogheda, and resigned his parish at Thurcaston on 8 November1610. But he remained Prebendary of Bishopshull in Lichfield Cathedral and Rector of Tatenhill in Staffordshire while he was Bishop of Derry.

Babington tried a new approach with his clergy. In his own words, he ‘did not violently go to work with them nor urge them by authority, but endeavoured rather to persuade their consciences by arguments and reasons.’ He tried also to compromise by being content with an Oath of Allegiance instead of insisting on an Oath of Supremacy, and approving an Irish language translation of the liturgy.

However, Babington was in office for a mere few months when he died unexpectedly on 10 September 1611. Local Roman Catholics claimed his death was divine punishment after he suggested that his neighbour, Andrew Knox, Bishop of Raphoe, should destroy a wooden statue of the Virgin Mary at Agivey. The statue was believed to be miraculous and was destroyed by fire in the centre of Coleraine. The story says the statue was not consumed in the flames, but the perpetrators were either struck dead on the spot, or, like the bishop, died a lingering death.

It seems, however, that Brutus Babington was not related to the other Babingtons who were related to the Comberford family. But he was the ancestor of another Babington family that continued to live in Ireland. He married Joan le Bird (1562-1611), who was also from Cheshire and they were the parents of two sons. Their eldest son, Richard, took control of the Babington estate in Urney, while their younger son, Edwin (born 1585), arrived in Ireland earlier and was Sheriff of Derry in 1608 and eventually succeeded to the Urney estate.

Edwin Babington was taken prisoner during the Irish Rebellion of 1641. His son, Matthew Babington (1610-1689) of Urney and Doe Castle, was attainted by the Dublin Parliament of King James II in 1689.

Matthew Babington’s son, William Babington of Urney (1651-1702), was a Captain in the Derry Garrison during the Siege of Derry in 1689, while another son, Richard Babington, was a Captain of Dragoons in the Irish army of William III and fought at the Battle of the Boyne.

Later members of the family included Ralph Babington, High Sheriff of Donegal in 1715, and numerous clergymen and generals.

Babington’s Tea Room has survived two world wars, the advent of fast food and many economic crises, and remains a favourite meeting place in Rome for writers, actors, artists and politicians. 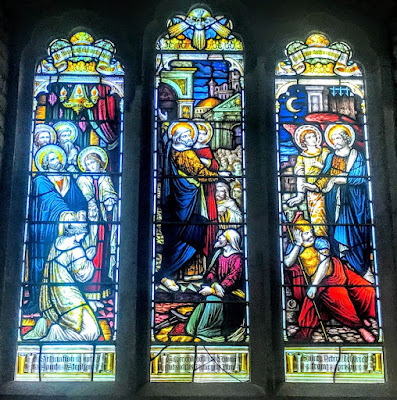