Finding the reliquary
of another child martyr
and saint from Rome 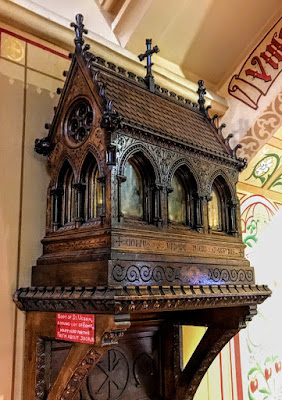 I sometimes wonder about the many saints’ bodies and parts of their bodies are kept in churches throughout Ireland.

They include the head of Saint Oliver Plunkett in Saint Peter’s Church, Drogheda, the heart of Saint Valentine at the Carmelite church in Whitefriar Street, Dublin, the heart of Saint Laurence O’Toole in Christ Church Cathedral, Dublin, and the bodies of three child martyrs from Rome: Saint Victoria in Saint Mary’s Cathedral, Kilkenny, Saint Adjutor in the Franciscan Friary, Wexford, and Saint Urban in Mount Saint Alphonsus, the Redemptorist church in Limerick.

Whether Saint Adjutor or Saint Victoria ever existed is a topic for another debate. But around the same time as their relics were being moved to Wexford and Kilkenny, the reliquary of another boy martyr, Saint Urban, were given to Mount Saint Alphonsus, the Redemptorist church in Limerick.

Towards the front of the nave of the church, the Chapel to Our Lady of Dolours contains a Pieta. There too, a shrine to Saint Urban, a Boy Martyr from Rome, is mounted on a wall in the chapel, and dates from December 1867.

The relics of Saint Urban are said to have been brought to the church in Limerick from the Catacombs in Rome.

A small, hand-written label in red and white writes: ‘Body of St Urban, a young boy of Rome, martyred for the Faith about 300 AD.’ 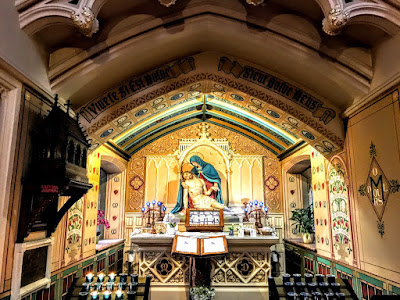 The Chapel to Our Lady of Dolours in Mount Saint Alphonsus in Limerick with the reliquary of Saint Urban (Photograph: Patrick Comerford, 2019)

Often wondered about the Boy Martyr, just visited him again when passing the church. I must spend a bit of time their weekend and see if I can come up with anything.