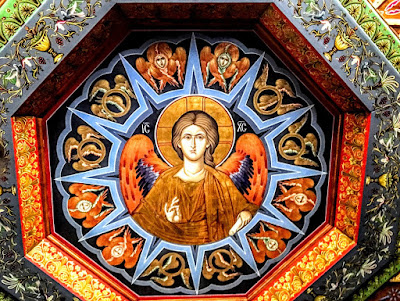 A modern painting on a ceiling in the Monastery of Rousanou in Meteora (Photograph: Patrick Comerford, 2019)

Sometimes you find a guide who is so good that you not only come away deeply impressed, but you realise you have learned and that you have been taught.

As I left Meteora on Sunday afternoon to return to Corfu, I was pleased to have learned so much from the guide Nikki who took me around two of the monasteries, Varlaam and Roussanou.

She provided a detailed explanation of the monks and nuns who live in these monasteries, and give a concise and precise introduction to the differences between the Macedonian and Cretan schools of wall painting in the churches of the monasteries. Her command of theological language and concepts came alive as she explained the images of the Last Judgement on the Doom Walls and the differences between the Orthodox concept of the Dormition and the Western idea of the Assumption.

But sometimes, perhaps not often enough, I wonder what the average tourist thinks theologians and Christians actually teach and believe. To read some of the material handed out by tour operators, I wonder whether they ever ask someone knowledge to read over what is being handed out to people.

I have come across some real theological ‘howlers’ in the past week.

For example, one leaflet declares:

Basil for the Greek Orthodox is considered a religious plant, because according to our religion, Saint Helene found the body of Jesus Christ with the small of basil.

Finding the body of Jesus Christ, rather than the cross, must have been some feat. Undoubtedly, Saint Basil would not have been impressed.

Or how about this:

For us, the Orthodox, the centre of our religion is considered Constantinople, the city of Constantine, which belongs to Turkey today and which bears the name of Instanbul [sic]. Istanbul is a Greek word which means εις τιν πόλη, that means to the city of Constantine. Konstantinoupoli today for the Orthodox Church resembles Rome for Catholics. The differences between the Orthodox and Catholics are very important for the two churches. Every time we enter the church, we do the Orthodox cross. We put the 3 fingers together and cross ourselves from upwards, down, right to left, which goes against the Catholics who finish their cross right. We repeat this 3 times.

And you were wondering what the important differences were? Now you know.

As for the differences in ecclesiology between East and West, I came across this explanation:

Another difference is that we do not recognize the infallibility of the pope. We have a patriarch of the same position, but he lives in Konstantinoupoli (fanari).

Did you think the infallibility of the Pope was the dividing issue in the Great Schism in 1054?

And if you have tried to explain the differences created by the insertion of the filioque clause in the Nicene Creed and its implications for understanding of the Trinity and the Trinitarian procession, then you are likely to remain perplexed after reading this:

Number 3 is like a sacred symbol that we can find in many situations in our religion. It is also found at the bell tower outside the Greek Orthodox churches ... For the Orthodox, the Holy Spirit comes from Jesus Christ and not from God.

Even if this is a bad translation, it teaches that God the Father is God alone, the Jesus Christ and the Holy Spirit are not part of the Holy Trinity, and what it tries to say about the procession of the Holy Spirit is precisely what the Orthodox Church does not teach, and not what the Western Church was trying to say in the filioque.

I may laugh. But if this is the theological nonsense handed out to tourists, how reliable and informative are the other details they are given on history, archaeology, architecture and the environment?

Did I tell you about the time, in another country, when I visited a synagogue with a tour guide who had a PhD in history … but admitted he could not read the inscriptions in Hebrew on the walls? He wondered what I meant when I asked had he tried to find out from a guide what they meant.