The Achilleion Palace
links Corfu with Sissi,
Maynooth and Mayerling 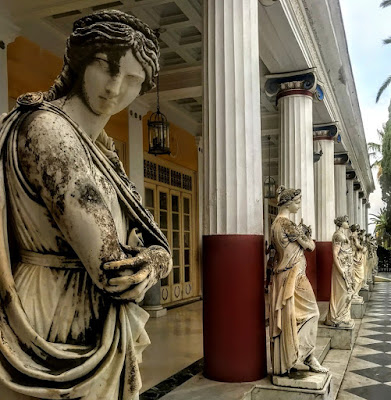 Muses in the Peristyle of the Muses Hall in the Achilleion Palace in Corfu (Photograph: Patrick Comerford, 2019)

On the road along the east coast into Corfu town, the Achilleion Palace is close to resorts such as Benitses, and half-way between Messoghi and Corfu town.

This neo-classical palace is one of the most visited sites in Corfu and was built in the 1890s for the Empress Elisabeth (1837-1898) of Austria, known popularly as Princess Sissi and remembered for her beauty and her turbulent and tragic life.

She was born Princess Elisabeth Amelia Eugenia in Munich, the daughter of Archduke Maximilian Josef of Bavaria. At the age of 16, she married the 23-year-old Habsburg Emperor, Franz-Josef I. But, despite having three children, their marriage deteriorated, and her mother-in-law, the Dowager Empress Sophia, took control of the two surviving children, Prince Rupert and Princess Gisela.

She first visited Corfu in 1861, when the island was still a British dominion, and was a guest of the last British governor of the Ionian Islands Sir Henry Knight Storks (1811-1874), in his palace at Mon Repos, near Kanoni. 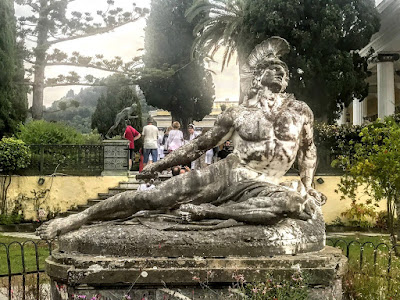 After a failed attempt at reconciliation with her estranged husband in Trieste, she returned to Corfu, lured by both the beauty of the island and her love of Greek classics, mythology, philosophy and language. She hired Greek tutors, travelled extensively throughout Greece.

She travelled further afield, visiting Ireland twice in 1879 and 1880, when she stayed with Lord Langford at his home in Summerhill, Co Meath. She hunted in Co Kildare and Co Meath with the Ward Union and other hunts, and famously chased a stag into the kennels in the new chapel at Saint Patrick’s College, Maynooth, on 24 February 1879.

Later, she returned to Maynooth, attended Mass in the college chapel, and presented the college with a statue of Saint George, one of the few saints depicted on horseback. She also endowed the college with a set of vestments of gold cloth with an edging in green silk decorated with gold and green shamrocks and the arms of Austria, Hungary and Bavaria. They were considered too valuable for liturgical use, however, and were housed in the college museum.

But her domestic life was marked by tragedy, including the tragic deaths of her sister, her brother-in-law, her cousin, her father, and then, on 30 January 1889, the death of her son, Prince Rupert and his 17-year-old lover Maria Vetsera, in a hunting lodge at Mayerling. Was it a double suicide, a murder and suicide, or a double assassination? 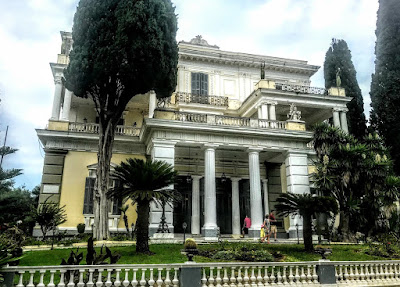 The Achilleion Palace was built for Sissi in Gastouri in 1888-1891 (Photograph: Patrick Comerford, 2019)

A year earlier, Sissi had bought a villa in the small village of Gastouri on the mountainside south of Corfu. Now she tore it down, and built a new palace designed by the Italian architect Raphael Carita. It became her island retreat from 1891, just as Corfu had become her second home.

While she was visiting Geneva, she was assassinated at the Beau Rivage Hotel on 10 September 1898 by an Italian anarchist Luigi Luccheni. She was 61. She was buried not in Corfu but with other members of the Habsburg dynasty in the Capuchin church in Vienna.

A week later, more than 600 students assembled for a Requiem Mass for the empress in the new chapel in Maynooth.

Following her assassination, the Acheilleion Palace in Corfu remained empty until 1907, when it was bought by the German Kaiser, Wilhelm II, who was related by marriage to the Greek royal family.

The empress had a fascination with Greek mythology and classical literature, and dedicated her palace to Achilles, who was killed at the Battle of Troy when Paris hit his heel with a fatal arrow. The myth tells how Achilles was dipped in the River Styx by his mother to make him invincible. But she held her child by his heels, which became his week point. 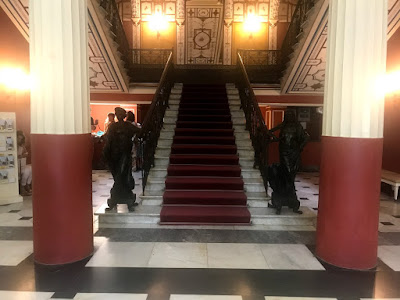 The main entrance hall to the palace is dominated by a massive marble staircase (Photograph: Patrick Comerford, 2019)

The main entrance hall to the palace is dominated by a massive marble staircase and magnificent ceiling decorations, including the fresco of the Four Seasons by the 19th century Italian artist Vincenzo Galoppi.

At the foot of the stairs are twin statues of Hera and Zeus.

The ‘Triumph of Achilles’ by the Austrian artist Franz Matsch (Photograph: Patrick Comerford, 2019)

Further up the stairs is a large painting of the Triumph of Achilles by the Austrian artist Franz Matsch (1861-1942).

Beside the chapel, the Kaiser’s Room was once the private office of Wilhelm II. The exhibits in the room include many of his personal belongings, including documents, portraits, photographs, medals, furniture, and his personal pennant from his private yacht. 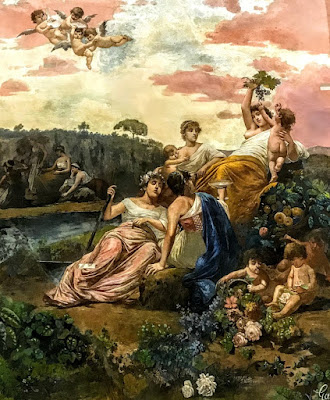 The fresco of the ‘Four Seasons’ by the 19th century Italian artist Vincenzo Galoppi(Photograph: Patrick Comerford, 2019)

At the back of the palace, the Peristyle of the Muses Hall has an understated elegance. Its pillars and statues surround an inner courtyard, including statues of the muses and busts of philosophers, playwrights and writers – the only non-Greek among them is William Shakespeare.

Above the garden, a statue of the Dying Achilles by the 19th century German sculptor Ernst Gustav Herter shows the wounded Achilles trying to remove the fatal arrow from his heel.

The steps lead down to the garden that overlooks the city and harbour of Corfu, with a giant-size statue by Johannes Gotz of Achilles – 5.5 metres high, holding a spear that is 7.5 metres long – looking out to the Ionian Sea and across to the coasts of Albania and mainland Greece.

During World War I, the palace became a military hospital for French and Serbian soldiers, and it was confiscated at the Treaty of Versailles in 1919 and was transferred to the Greek state as a part payment for German war reparations. During World War II, it was used as a field hospital by occupying Italian and German forces.

In the post-war period, it was used as a teachers’ training centre, a school, and then as a casino until 1983. 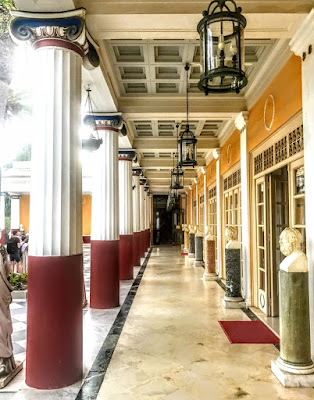 Shakespeare is the only non-Greek among the Wise Men (Photograph: Patrick Comerford, 2019)

Many years ago, I stayed in the Achilleion Hotel, once the oldest hotel in Rethymnon in Crete but long since converted to other uses. It was about 20 years ago, and we joked about the shower in our room being hidden in what appeared to be a wardrobe. One side of the hotel looked down on Arkadiou Street, the main shopping street of the city, and the other looked out to the harbour and the sea.

The wrought iron balconies at the hotel rooms with their griffins recalled the designs of the Achilleoin Palace, and were fading reminders of the influence of Empress Elisabeth on style and taste throughout Greece at the end of the 19th century. 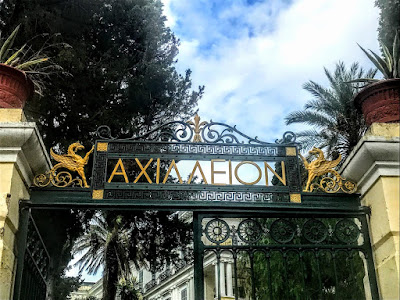 The style of the Achilleion Palace in Corfu inspired arts and crafts throughout Greece (Photograph: Patrick Comerford, 2019)