Preparing for a lecture
brings back memories
of philosopher, friar
and peace activist 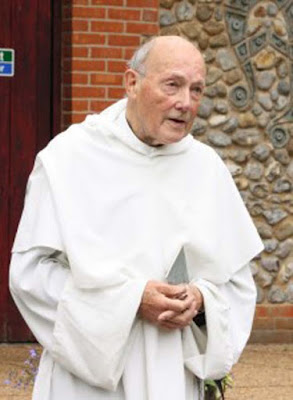 Father Columba Ryan (1916-2009) … philosopher, peace activist and friend of Elizabeth Anscombe, he set up the Philosophical Enquiry Group at at Hawkesyard Priory near Rugeley in 1954

I am putting the finishing touched to a lecture later this month [15 October 2019] in Saint Mary’s Cathedral, Limerick, on the philosopher Elizabeth Anscombe ((1919-2001).

Elizabeth Anscombe was born in Limerick and was baptised in Saint Mary’s Cathedral, Limerick, 100 years. She and her husband Peter Geach were two of the leading English philosophers in the 20th century, and so it is appropriate to speak of her life in the cathedral in which she was baptised.

But as I was working through my notes in recent days, I was reminded of her close friend, Father Columba Ryan OP (1916-2009), the Dominican priest, philosopher, university chaplain and peace activist.

Father Columba was born Patrick Ryan in Hampstead on 13 January 1916 into an Irish family. He was the second son of the Cork-born diplomat Sir Andrew Ryan (1876-1949) and his wife Ruth Marguerite (van Millingen).

Patrick Ryan and his brother John were educated by the Benedictines at Ampleforth in North Yorkshire. After Ampleforth, Patrick spent a year in France before joining the Dominicans at Woodchester Priory, Gloucestershire, in 1935. He was given the name Columba, was professed on 30 September 1936 and was ordained on 25 July 1941.

He was 30 when he completed his DPhil at Oxford University in 1946. He was one of the friars who was on the Peace Pilgrimage to Vézelay in Burgundy, selecting ‘30 strong men’ to carry a heavy wooden cross across France in thanksgiving for the end of World War II. On his return he was instrumental in founding Student Cross, the annual Holy Week pilgrimage to Walsingham. 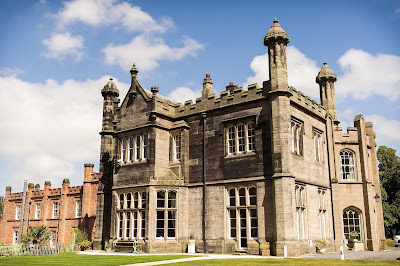 The Dominican House of Studies at Hawkesyard Priory, near Rugeley … Father Columba Ryan set up the Philosophical Enquiry Group there in 1954

Father Columba had an analytical mind and enjoyed philosophical controversy and debate. He was teaching philosophy at the Dominican House of Studies at Hawkesyard Priory in Spode House, near Rugeley in Staffordshire, and six miles north-west of Lichfield, when he set up the Philosophical Enquiry Group in 1954.

This annual meeting for Catholic philosophers continued to took place at Spode House for 20 years, until 1974. The Catholic philosophers Elizabeth Anscombe and her husband Peter Geach were among the first philosophers invited to those gatherings at Spode House. They remained leading figures of the group for the 20 years it lasted. Other participants included Sir Anthony Kenny of Oxford and Herbert McCabe (1926-2001), editor of New Blackriars. Father Coloumba had been the novice master of Father, who is attributed with once saying, ‘If you don’t love, you’re dead, and if you do, they’ll kill you.’

Father Columba was also the bursar at the Hawkesyard Priory, and in the 1950s and 1960s he took part in many CND marches and protests in London.

I knew Hawkesyard Priory and Spode House well in my late teens and early 20s, when the Philosophical Enquiry Group was still meeting there with Father Ryan and Elizabeth Anscombe. At the time, the Folk Masses in the priory chapel were popular with many of my friends from Rugeley, Brereton and Lichfield.

It was the early 1970s, and at that age I enjoyed the music of English folk rock bands such as Steeleye Span, Pentangle, Fairport Convention, Lindsifarne and Jethro Thull. Their music provided an interesting bridge to both the music of Vaughan Williams, which I was introduced to in rural Shropshire, and the Folk Masses at Spode House, which had become a popular venue in rural Staffordshire not only for but for retreats, short courses on church music, theatrical groups, youth organisations, prayer and reflection.

Father Donald Proudman had died before I got to know the place, and I was too young then to know of the the Philosophical Enquiry Group. But the friars there in those heady days of the early 1970s included the saintly Father Columba, who was immersed in the history of the house and who was a CND supporter until his dying days; and Father Conrad Pepler (1908-1993), the founding warden, who we did not know had provided a Roman Catholic funeral in Cambridge for the philosopher Ludwig Wittgenstein, a mentor to both Elizabeth Anscombe and Peter Geach. Later they were Wittgenstein’s literary executors and were buried beside him in Cambridge.

The priory and conference centre at Spode House closed and the last Dominicans moved out in 1988. At a lengthy lunch in Lichfield a few years ago, some of us recalled so many of our friends who loved Hawkesyard, the folk masses there and the extended Sunday afternoons that inevitably followed.

By then Father Columba had long left Hawkesyard Priory. He was briefly in charge of studies at Blackfriars, Oxford, where he was pro-regent of studies, and then became chaplain to the Catholic students at the University of Strathclyde. His solitary presence in a remarkable flat on George Street paved the way for the return of a Dominican community to Glasgow.

In London, he was very much loved by people from very different social, political and religious backgrounds. True to his values when he took part in early CND protests, he joined the many hundreds of thousands of people who marched in London on 15 February 2003 in protest at the invasion of Iraq.

He was an early pioneer of religious broadcasting, producing and narrating films about the religious life. He was in his 90s when he gave up editing the weekly St Dominic’s Newsletter, but he continued preaching his remarkable homilies until shortly before he died.

Father Columba had many long-standing friendships with men and women in politics, the arts and the academic world. His contribution to philosophy and theology was more through the people he taught than through any major publication. His students included Herbert McCabe and Timothy McDermott, both translators of the Blackfriars Summa, and Fergus Kerr.

However, one short piece, ‘The Traditional Concept of Natural Law: an Interpretation’ (1965) which he claimed to have written on the train before giving it as a lecture, has been influential.

Father Columba Ryan OP died 10 years ago at Saint Dominic’s Priory at Haverstock Hill in north-west London on 4 August 2009, aged 93. It was then the Feast of Saint Dominic, and it was the church in which he had been baptised as an infant; he had just celebrated 68 years of priesthood.

My lecture on Elizabeth Anscombe in Saint Mary’s Cathedral, Limerick, on 15 October is part of the October Lunchtime Lecture Series in the cathedral, each lecture taking place at 1 p.m. 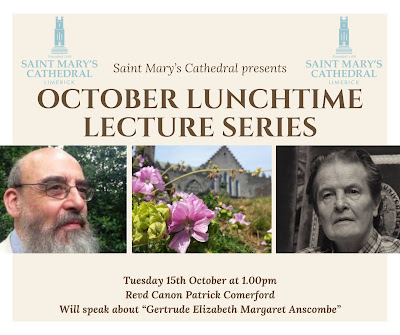 I so enjoyed reading this. I loved going to Hawkesyard, and still have my « filched » copy of the Sunday folk mass, the words of which I still use quietly to myself (by heart - in both senses of the word). Frs Aidan, Gordian, Duncan, Jo, Gerard I remember with affection. Such a happy place - and the smell of Sunday lunch while walking along towards the bar - Father Aidan pulling a pint of Guinness.