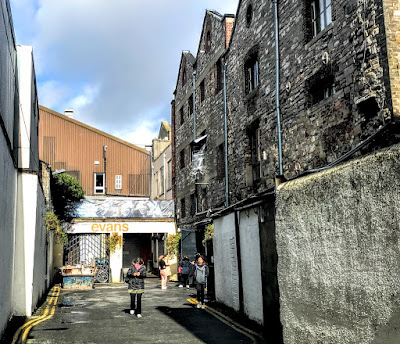 The site of the former synagogue at Mary’s Abbey in Dublin (Photograph: Patrick Comerford, 2019)

When the Stafford Street Synagogue in Dublin was forced to close in 1836, Dublin’s Jewish congregation moved to premises at 12 Mary’s Abbey, off Capel Street, and remained there for almost two generations until 1892.

The new synagogue was Dublin’s fourth, following short-lived synagogues at Crane Lane, off Dame Street; Marlborough Green, off Marlborough Street; and the converted rooms on an upper floor of a private house at 40 Stafford Street, now Wolfe Tone Street.

Like its predecessors, this was not a purpose-built synagogue, but the former chapel of a small Presbyterian group known as the Non-Burghers or Seceders, who later went on to join similar groups in forming the General Assembly of the Presbyterian Church in Ireland.

Saint Mary’s Abbey, which gives its name to nearby Abbey Street, was founded by the French Cistercians in 1147 on the site of an older Benedictine foundation. The chapter house was used as the meeting place for the king’s council, and it was there ‘Silken’ Thomas Fitzgerald renounced his allegiance to Henry VIII and started his ill-fated rebellion.

The abbey was dissolved at the Reformation in 1539 and its lands were divided.

The former Presbyterian chapel at Mary’s Abbey, which gives its name to Meeting House Lane, was bought on 15 January 1836 to provide a permanent synagogue for Dublin’s Jews, who then numbered about 300 people. A further £500 was spent on providing the new synagogue with a new aron hakodesh or ark for the Torah Scrolls, a bimah or reading desk seating and flooring.

The Revd Isaac Davidson, who had been the minister in the Stafford Street synagogue, moved with the congregation to Mary’s Abbey. The first trustees were Alexander Lazarus Benmohel (1788-1839), Joseph Wolfe Cohen (1780-1869) and Simon Rosenstein (1794-1862).

Benmohel travelled to London to ask the elders of the Spanish and Portuguese Synagogue or Bevis Marks to become trustees for the property, and some time later the congregation asked to be considered a branch of Bevis Marks.

The capacity of the synagogue is disputed by historians. Louis Hyman, in The Jews of Ireland (1972) says at first the synagogue had a seating capacity of about 90 and that the numbers were never greater than 350 at its peak. However, others say even these modest figures may be overstated.

Indeed, the first laws published by the synagogue in 1839 imply a small membership. However, the only statistics available for the Mary’s Abbey congregation are the records of births and deaths kept from 1838 to 1879 by the Revd Julius Sandheim, who had succeeded the Revd Isaac Davidson. The synagogue at Mary’s Abbey survived from 1836 until a new synagogue opened at Adelaide Road in 1892 (Photograph: Patrick Comerford, 2019)

From its early days, services were limited to Saturdays, the principal festivals, life-cycle events and other special occasions, as opposed to daily worship or even the full cycle of Shabbat services.

‘Watchers’ for the critically ill, dead and recently buried were chosen by lot from among the members of the community. Members who did not live locally as well as visiting Jews were liable to be persuaded to take part in this role, which indicates that the community was neither large nor socially diverse at this time.

The rules on apportioning the aliyot for reading the Torah also indicate a small membership. Perhaps synagogue membership had come to be associated primarily with social prestige and attendance was poor outside of the High Holydays.

The attendance and membership were drawn mainly from the Anglo-Jewish middle classes in Dublin, and its strict Victorian standards of decorum fostered a formal and stuffy atmosphere that later earned it the nickname of the Englishe shul (‘English synagogue’) among a newer immigrant community.

Children were barred from parading the Torah scrolls on the festival of Simchat Torah, and the noisy rattles and disturbances associated with the reading of the Megillah or Book of Esther were prohibited. No-one was allowed to discuss private disputes or grievances in the synagogue at any time.

The congregation was seen as a prosperous community in its early years. By 1853, it was able to buy the freehold on the property in Mary’s Abbey, and the trustees were Joseph Wolfe Cohen, Simon Rosenstein, Henry Lazarus (1808-1868), Henry Nerwich (1804-1883) and Lewis Harris (1812-1876), originally known as Samuel Wormser.

The income was boosted in 1854 with a bequest from Abraham Cohen that yielded an annuity of £100, on condition that the Dublin synagogue would ‘conform to the form and service of the Great Synagogue, Duke’s Place, London,’ for centuries, the main Ashkenazi synagogue and centre of Ashkenazi life in London.

However, the Dublin synagogue was unable to employ a rabbi, and was dependent on a less-qualified, poorly paid, multi-functional minister, the Revd Jacob D Davis, who acted as baal-koreh (reader), hazan (cantor), secretary and Hebrew teacher from 1855 until he died in 1861.

The Jewish Chronicle reported in 1858 that this was one of the first provincial congregations to introduce ‘pulpit instruction.’

The congregation began to call itself the Dublin Hebrew Congregation from around 1859. It aligned itself with the Board of Deputies of British Jews, although it was not always able to appoint an Irish representative, and its ministers and teachers were expected to be competent in English and accredited by the Chief Rabbi.

Anyone married to a non-Jew was not allowed to engage a seat or to receive any form of honour. The synagogue committee decided whether Jews who had intermarried or who did not openly profess the religion as a Jew would be allowed a Jewish burial.

Meanwhile, the Revd Philipp Bender was appointed to the congregation in 1862. His Dublin-born son, Professor Alfred Philipp Bender (1863-1937), was instrumental in founding the Cambridge Hebrew Congregation and conducted its services for many years.

The general affluence of the Dublin community was also reflected in the frequent, generous donations members made to a range of and non-Jewish causes.

When a leading member, Henry Lazarus was dying in 1868, prayers were offered by a prominent priest in the Pro-Cathedral in recognition of his long-standing generosity to charity.

For many years, the synagogue was run by a select committee of long-serving honorary officers. Among them was John David Rosenthal (1833-1907), a distinguished solicitor who was active in Jewish and non-Jewish philanthropy and the first Jew to receive an LL.D. from Trinity College Dublin. He served for almost 30 years as honorary secretary, and for about 15 years as the Dublin representative to the Board of Deputies.

Marinus de Groot (1829-1902), a respected merchant from Rotterdam and a magistrate in Dublin, was president of the Dublin Hebrew Congregation for over 26 unbroken years (1876-1901).

By the mid-1870s, the Jewish Chronicle reported that the congregation was ‘respectable but unfortunately dwindling.’ Any increase in numbers between 1839 and 1875 was not sustained.

The last Sabbath service was conducted at Mary’s Abbey on 5 December 1892. On the following Saturday, Jews and Christians attended the dedication of an ornate purpose-built synagogue at Adelaide Road, that remained open until 1999. 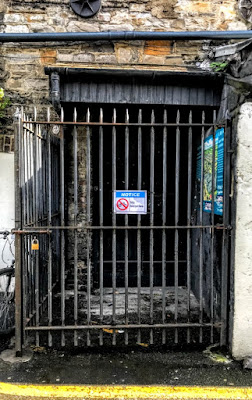 What is left of the Cistercian chapter House at Saint Mary’s Abbey survives under the street level (Photograph: Patrick Comerford, 2019)