Sligo’s Cathedral: the only
Romanesque Revival
cathedral built in Ireland 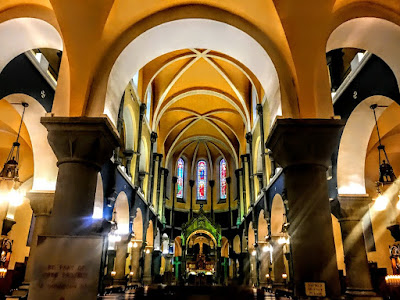 Inside the Cathedral of the Immaculate Conception on Temple Street, Sligo (Photograph: Patrick Comerford, 2019)

I was at a family wedding last weekend in Sligo in the Cathedral of the Immaculate Conception on Temple Street, the cathedral of the Roman Catholic Diocese of Elphin. The cathedral and its tower dominate the skyline of Sligo, and the chimes of its bells peal out over the city, with Ben Bulben in the background.

The Diocese of Elphin is said to date from the fourth century. According to tradition, Ono son of Oengus offered a house to Saint Patrick ca 450, who renamed it Ail Fionn (‘Rock of the Clear Spring’) and placed his disciple, Saint Assicus, in charge.

However, if a monastery survived at Elphin, it was not until the 12th century that Elphin was established as a diocese of East Connacht.

The Roman Catholic Diocese of Elphin did not have a cathedral until the mid-19th century, but Saint John’s, a small parish church near the site of the Cheshire Home, had served as the pro-cathedral from 1827.

Bishop Laurence Gillooly (1819-1895) was appointed co-adjutor bishop in 1856 and succeeded George Browne as Bishop of Elphin in 1858. Sligo was then a growing, thriving town, and Bishop Gillooly became the inspiring figure in planning and building a new cathedral there.

Laurence Gillooly was born near Roscommon, studied in Paris and was ordained a Vincentian priest in 1847. In 1859, a year after becoming diocesan bishop, he secured a renewable lease from Sir Gilbert King of two adjacent properties close to the Lungy, and beside Saint John’s Church which would become the Church of Ireland cathedral in 1961. One of these properties, known as the Bowling Green, became the site of the new Roman Catholic cathedral. 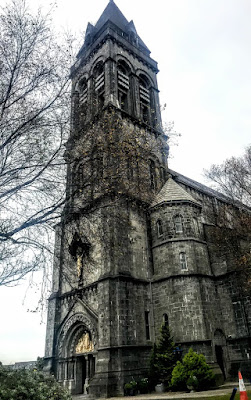 The Cathedral of the Immaculate Conception was designed by the English-born architect George Goldie (Photograph: Patrick Comerford, 2019)

The cathedral was designed by the English-born architect George Goldie (1828-1887), who also designed Saint Saviour’s Dominican Church, Waterford (1876-1877). Goldie also remodelled the interior and exterior of Saint Saviour’s, the Dominican church in Limerick, and designed the High Altar and reredos in the Redemptorist Church at Mount Saint Alphonsus in Limerick.

Goldie was joined in his architectural partnership in 1880 by his son Edward Goldie (1856-1921), whose work includes Hawkesyard Priory in Armitage, near Rugeley and six miles north-west of Lichfield, built for the Dominicans in 1896-1914, and which I knew in my late teens and early 20s. 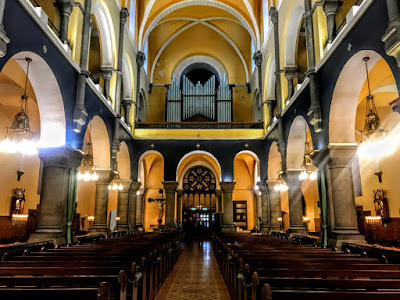 Inside the Cathedral of the Immaculate Conception, looking west (Photograph: Patrick Comerford, 2019)

The cathedral was built in a Norman style, and it is the only Romanesque Revival cathedral among the cathedrals of the 19th and 20th centuries in Ireland, built at a time when the fashion was for Gothic cathedrals and churches.

The main contractor was Joseph Clarence of Ballisodare, and Bishop Gillooly took complete charge of the building project when work began in 1869. The cathedral is built of cut limestone and is modelled on a Norman-Romano-Byzantine style.

Goldie designed this cathedral in the form of a basilica. Contemporaries called his design ‘Norman,’ but it is in a round-arched style that includes elements of English, German and Irish Romanesque. 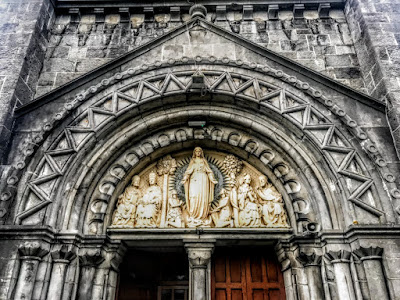 The tympanum over the west door of the cathedral (Photograph: Patrick Comerford, 2019)

The cathedral has a square, pyramid-capped tower, that reaches a height of 70 metres, and supporting turrets at the west end. The tower incorporates the main entrance to the building. The tympanum over the main door has a series of scriptural figures sculpted in alto rellevo.

The three-faced clock tower, designed by Gillet & Bland of London in 1877, is one of the finest examples in Ireland of a 19th-century turret clock, and the carillon comprises nine bells. The largest bell weighs 1,456 kg and is dedicated to Our Lady. All the bells are beautifully decorated with the harp and shamrock and the chimes are a familiar sound to everyone in Sligo. 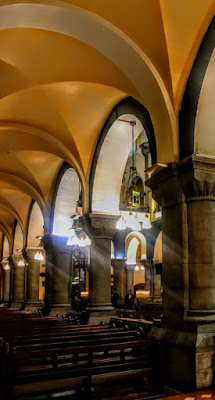 This is a very spacious cathedral with a clerestory or side gallery on the both sides, a triforium, and a choir loft.

The arches, supported by 18 massive stone pillars of finely chiselled limestone, connect the nave and the aisles, and the aisles continue to form an ambulatory around the apse. 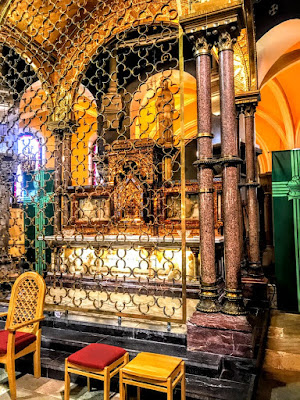 The original High Altar and its brass baldachino have been preserved (Photograph: Patrick Comerford, 2019)

The original high altar was considered one of the finest in Ireland, surmounted by a brass baldachino and reached by six marble steps. The tabernacle was flanked by two carved panels depicting the sacrifices of Abraham and Melchizedek.

The baldachino and high altar recall, in beaten brass, the artisanship of Asicus, the first Abbot-Bishop of Elphin and Patron of the Diocese.

The Bishop’s Chair or cathedra has a prominent place in the sanctuary set against a double pilaster, with the corresponding pilaster on the opposite side displaying the diocesan coat of arms in marble.

The two side altars in the transepts are dedicated to the Sacred Heart and to Saint Joseph. 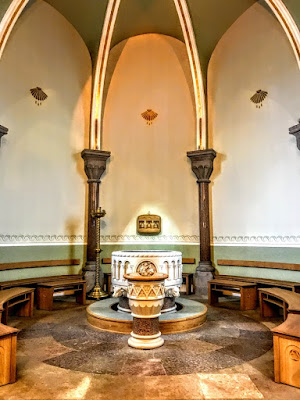 The baptistry in the apse was originally intended as a mortuary chapel (Photograph: Patrick Comerford, 2019)

The baptistry in the apse was originally intended as a mortuary chapel, but was never used for this purpose and was converted into a baptistry in 1975.

Bishop Laurence Gillooly (1895), Bishop John Clancy (1912) and Bishop Bernard Coyne (1926) were buried in the crypt beneath the baptistry.

One of the attractions of the cathedral is the stained-glass windows by Loblin of Tours in France. Gillooly’s choice of Loblin instead of the popular Meyer of Munich was probably influenced by his education in Paris. 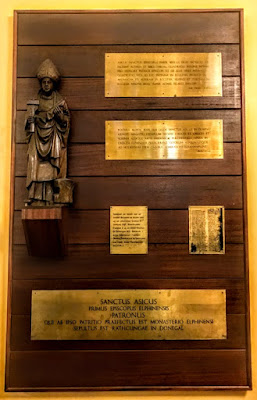 A carved wooden statue of Saint Assicus, the legendary founder of the Diocese of Elphin (Photograph: Patrick Comerford, 2019)

A carved wooden statue of Saint Assicus, the legendary founder of the Diocese of Elphin, was found in an antique shop in London and presented to the cathedral in 1962.

The cathedral was solemnly opened on 26 July 1874 by Cardinal Paul Cullen of Dublin, was consecrated on 1 July 1897 and dedicated to the Immaculate Conception of the Blessed Virgin Mary.

The cathedral might have been dedicated to Saint Assicus or Saint Patrick, who associated with the stories of the foundation of the Diocese of Elphin, or to Saint John, continuing the name of the old pro-cathedral. But the cathedral in Elphin was dedicated to Saint Mary the Virgin, and Gillooly, who had been a vocal defender of Papal Infallibility at Vatican I, was strongly influenced by French devotions to the Immaculate Conception.

Since it was built, the cathedral has undergone extensive renovations on two occasions. The most recent remodelling of the sanctuary in 1974-1975, to meet the needs of post-Vatican II liturgy. This is the work of the architects William H Byrne & Son and Patrick Rooney & Associates, and included extending the sanctuary at the level of the high altar.

A new altar, occupying a central position on a raised dais, is of cut limestone and complimented by a matching ambo and presider’s chair. The original high altar has been preserved, along with its brass baldachino.

The cathedral was reconsecrated on 7 December 1975 and solemnly opened the following day.

The present Bishop of Elphin is the Most Reverend Kevin Doran, who was appointed in 2014. 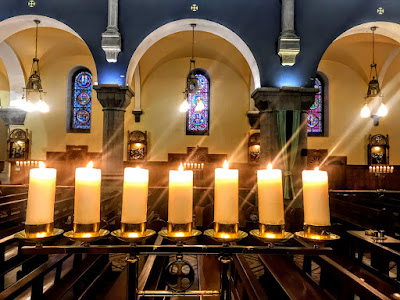 The cathedral was reconsecrated and reopened in December 1975 (Photograph: Patrick Comerford, 2019)