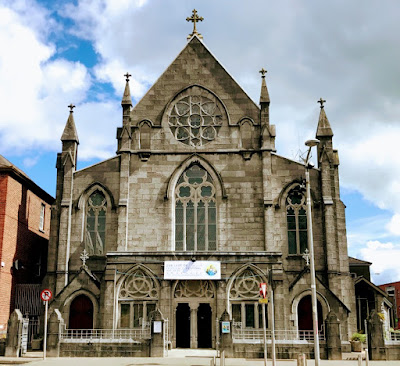 The Dominicans first came to Limerick almost 800 years ago in 1227. When the Dominican friars announced two years ago that they were leaving the city, a Dominican order of nuns based in Nashville, Tennessee, came to the rescue and agreed to keep the church open.

The Dominican Sisters of Saint Cecilia arrived in Limerick from Nashville last August [2016], and their presence keeps open an 800-year Dominican association with the city, while priests continue to celebrate Mass in the church every day.

Saint Saviour’s on the corner of Glentworth Street and Baker Place is a Gothic Revival Church that has been altered and added to over the past two centuries. But it brings together in one building the work of many of the most important church architects in Ireland, including James Pain, James Joseph McCarthy, William Wallace, George Goldie, and Ashlin and Coleman.

The church in Glentworth Street dates back to 1815-1816, when the Dominicans moved from their Penal-era chapel on Fish Lane under the leadership of the Dominican Prior, Father Joseph Harrigan.

Edmund Henry Pery (1758-1844), 1st Earl of Limerick, donated the land to the Dominicans. The corner site faces onto Baker Place and Dominick Street, and the east end of the church faces directly onto Griffith’s Row. It faces Saint Michael’s Church of Ireland parish church, and the two churches bookend Pery Street, giving these two Gothic-style churches an visible ecumenical impact and an important architectural role in the Georgian area around Pery Square.

The original church was a plain Gothic church designed by James Pain. The foundation stone was laid on 27 March 1815 in the presence of Dr Charles Tuohy, Bishop of Limerick, and the Provincial of the Dominicans, Father Patrick Gibbons, and the church was consecrated on 6 July 1816.

There is no Saint Saviour, needless to say, and the actual dedication is to the Most Holy Saviour Transfigured, a popular dedication for Dominican churches, with similar foundations in Dublin and Waterford, for example.

Father Joseph Harrigan, the main inspiration for building the church in 1816, died on 23 January 1838, and is buried in Saint Saviour’s.

This is probably the Gothic church William Makepeace Thackeray refers to dismissively during his visit to Limerick in 1842. 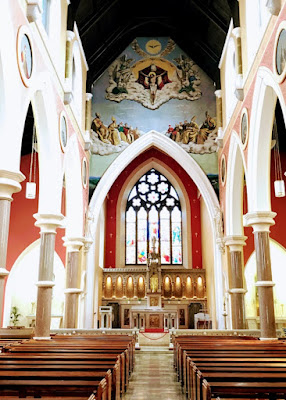 Inside Saint Saviour’s … the church brings together the work of many key 19th century church architects (Photograph: Patrick Comerford, 2017)

Some repairs and alterations designed by JJ McCarthy in 1860 were carried out by John Ryan. McCarthy's work in Limerick included Saint Mary’s Church, Rathkeale, Co Limerick, Saint Senanus Church, Foynes, and Cahermoyle House, the home of the family of William Smith O’Brien.

More extensive work was carried out immediately afterwards by the Limerick-born architect William Wallace, who renovated the church in 1861-1864. He added a clerestory, raising the height of the church by 20 ft, and added the rose window.

At the same time, George Goldie (1828-1887) of Goldie and Child designed a new chancel, high altar, reredos, tabernacle and east window in 1863-1666. In 1870 Goldie and Child remodelled the interior and exterior and the work was supervised by Maurice Alphonsus Hennessy of Limerick.

The altar is the work of the Cheltenham sculptor Richard Lockwood Bolton (1832-1905), the only example of his work that I know of in Ireland. The Gothic Revival marble and polished granite reredos, with a centrally-placed pinnacled tabernacle, is the work of the Cork sculptor Patrick Scannell. There is a large mural of the Transfiguration over the altar arch.

The East End stained glass window of the Transfiguration was by William Wailes of Newcastle, and dates from 1866. The communion rails and gates were designed by Ashlin and Coleman in 1927.

To the right of the high altar is the 17th century oak statue of Our Lady of Limerick, brought to Limerick from Flanders by Patrick Sarsfield in 1640 in reparation for the death sentence passed on Sir John Burke of Brittas by his uncle, Judge Dominic Sarsfield. For many years, the statue was buried in a box in the graveyard at Saint Mary’s Cathedral, along with the Sarsfield Chalice.

A three-sided canted choir and organ gallery at the west end of the nave is supported by marbelised cast-iron columns and an elaborate timber pier rising from a limestone base. 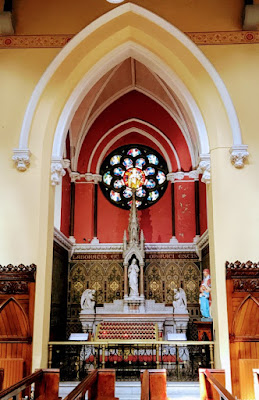 The Sacred Heart Chapel off the north aisle is the work of George Coppinger Ashlin (Photograph: Patrick Comerford, 2017)

The Sacred Heart Chapel off the north aisle, also called the Carbery chapel, dates from 1896-1899 and is the work of George Coppinger Ashlin. It is enclosed by a wrought-iron and brass balustrade, with a raised tiled platform, mosaic tiled walls, and a plastered groin vaulted ceiling.

The chapel off the south aisle is dedicated to Saint Martin de Porres and dates from 1960.

The frescoes on both sides of the centre aisle of Dominicans saints are the work of Father Aengus Buckley, who also painted the fresco of ‘The Triumph of the Cross’ over the chancel arch in 1951.

An oratory in the church remembers Bishop Terence Albert O’Brien of Emly, a Dominican who was hanged in the abbey ruins in 1651 for his resistance to the Cromwellian siege of Limerick. he had received the statue and chalice from Patrick Sarsfield, and was buried with them in the churchyard at Saint Mary's Cathedral. This is yet another reminder of the long connection the Dominicans have had with Limerick over the generations and down through the centuries. 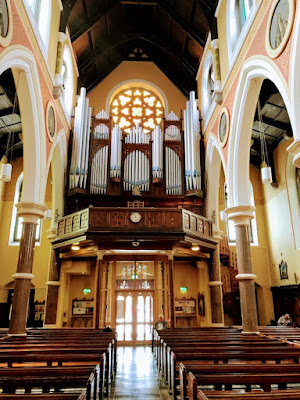 The choir and organ gallery at the west end is supported by columns and a timber pier (Photograph: Patrick Comerford, 2017)

It’s nice to see and it brings back lovely memories of all the Masses I attended in “the Domicans “ during my childhood. I lived just a short distance from there and every time we went out the door we saw it . I have a lovely drawing of it and Tates clock which brings back memories of home.