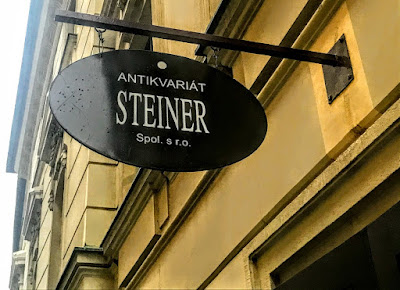 The Steiner Antiquarian bookshop is a literary landmark in the old town in Bratislava (Photograph: Patrick Comerford, 2019)

Antikvariát Steiner or the Steiner Antiquarian bookshop at Ventúrska 22, in the heart of the old city, has shelves stacked with antiquarian books, old prints, graphics and postcards. It dates from 1847, and was restored in 1991.

Sigmund Steiner (1821-1908), who is seen as the founder of this shop, was born in the Moravian town of Kojetín, now in the eastern Czech Republic. After the death of his father, Herman Steiner (1788-1832), he grew up in the home of his older brother, ‘a religious workman,’ and became a librarian. Sigmund had dreams of becoming a rabbi, and arrived in the 1830s with nothing in Bratislava, then known as Pressburg and an important city in the Austro-Hungarian Empire.

Giving up his dreams of becoming a rabbi, Sigmund combined his Jewish Orthodox traditions with a secular education. He married the widowed Josephine König (née Bendiner), the widow of a watchmaker.

When her first husband died, Josephine’s brother in Vienna tried to help her to set up a second-hand bookshop and lending library by sending a box of books by classic German writers. Josephine set up a bookshop on Židovská Street or Jewish Street, in the so-called Jewish quarter, in 1847. A year later, Josephine married Sigmund Steiner, and from then on the shop was run under his name.

Josephine and Sigmund Steiner were the parents of three children. They lived a religious life and closed the bookshop on Shabbat, but raised their three children according to Rabbi Samson Raphael Hirsch’s maxim, Torah im derech eretz (having a secular and Jewish education), an attitude reflected in the stock of the bookshop: it had both religious Jewish items and classics of world literature. 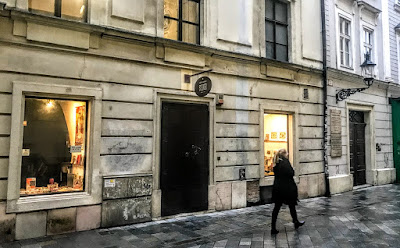 Their eldest son, Hermann, who inherited the bookshop, married Selma Goldberger in 1877 and they were the parents of ten children. After the Jewish ghetto was abolished in Bratislava, Herman and Selma Steiner bought the three-storey building at Venturgasse (Ventúrska) in 1880 and moved their family and the bookshop there. They also bought a summerhouse, which they called the ‘Garden’ and where they grew 1,000 fruit trees.

The family belonged to an Orthodox-Zionist stream of Judaism. Herman and Selma-Sara Steiner were the parents of nine children, and during World War I four of their sons served in the Austro-Hungarian army – Siegfried, Max, Gustav and Józsi – and all four returned from the war uninjured.

His sons Max and Józsi inherited the bookshop on Ventúrska. But their eldest son William was the only one of their nine children who would survive the Holocaust; five of their 16 grandchildren were murdered during the Holocaust.

Under the Nazis, the Steiner antiquarian bookshop was ‘Aryanised’ by a Slovak writer, Ľudo Ondrejov. Four members of the Steiner family worked for the new Aryan ‘owner’ – no money changed hands to denote the change in ownership. Soon, the new owner formally declared the Steiners ‘surplus’ or unneeded workers.

Dr Gustav-Mordechai Steiner (1893-1944), the seventh of nine children born to Herman and Selma-Sara Steiner, was decorated as a medical officer in the Austrian army during World War I. He married Gita Kürcz, the daughter of a metal trader, in 1930, and they were the parents of two children: Karl-Nathan and Alice-Sara.

Gustav ran a medical practice from their home in Bratislava and Gita ran the clinic, while Gustav also worked several hours a week at the Jewish hospital in Bratislava.

Dr Gustav Steiner’s license to practice medicine was revoked in June 1940, but he continued treating patients, including Jewish refugees. Later he was allowed to practice again, but he was forced to relocate with his family to the village of Stupava.

Gustav, Gita and their two children were imprisoned in October 1944. Gustav and Alice were sent on the last transport from Bratislava to Auschwitz on 17 October 1944. Alice was murdered in the gas chambers in Birkenau on 19 October 1944, a day before her tenth birthday. Gustav was sent from Auschwitz to Kaufring, a satellite camp of Dachau, on 27 October 1944 and was murdered there in December 1944. Gita and her son Nathan were deported to Bergen-Belsen and survived. Nathan died in Bratislava in 1948.

By 1949, all surviving members of the family had moved to Israel, apart from Selma, who was Siegfried’s daughter, and Lydia, who was Józsi’s daughter. In Israel, Herman and Sara Steiner’s grandson, Nathan Steiner, now heads the Union of Czechoslovak Immigrants and is active in commemorating the Jews of Czechoslovakia.

Selma Steinerová (1925-2010) was the only person in Siegfried Steiner’s five-member immediate family to survive the Holocaust. She was deported to the Czech concentration camp in Terezín or Theresienstadt, 70 km north of Prague. After World War II, she returned to Bratislava, and was the fourth generation of the Steiner family in the city. Selma was almost 20 and an orphan when she returned to Bratislava from Theresienstadt, and at first she lived with Alexander Albrecht and his family.

The post-war government agreed to return all confiscated property to the Steiners in 1948. However, almost immediately, the state confiscated all small businesses, and the Steiner family once again was living on the wrong side of history. The summerhouse, with the ‘garden’ where 1,000 fruit trees once grew, became the site of Slavín, the monument to the Soviet troops who liberated Bratislava in 1945.

Until 1989, the state-owned bookshop, ‘Books,’ was the only major bookseller allowed to operate in Slovakia. Selma Steinerová worked for a wholesale company supplying the government bookshop. After the fall of communism, at the age of 66, she reopened her family bookshop Bratislava in 1991 at its original location on Ventúrska in the heart of old town.

With its small, simple oval sign, ‘Steiner,’ the shop soon became one of the city’s cultural symbols. She initiated and supported a special imprint, Pressburg, dedicated to the history of Bratislava, at the Marenčín publishing house.

Martin Trančík, a Swiss economic history and civil rights student in Basel and a son of Slovak emigrants, wrote a thesis piecing together the mosaic of the Steiner family, focussing on their Jewish Orthodox traditions and how they were affected by the Holocaust and by modern times. His thesis was published in German as Zwischen Alt-und Neuland (‘Between Old and New’) in Bratislava in 1996, and was translated into Slovak a year later.

Selma Steinerová died in 2010. Since then, the shop has been owned by former employees who continue running it under the Steiner family name. The oval sign with the Steiner still hangs outside. 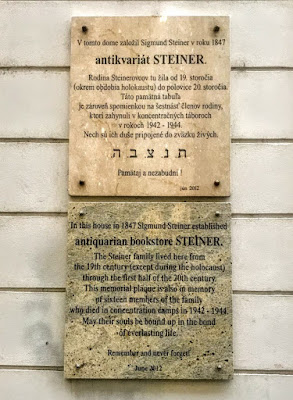 ‘May their souls be bound up in the bond of everlasting life’ … a memorial to the Steiner family at the antiquarian shop on Ventúrska recalls their sufferings in the Holocaust (Photograph: Patrick Comerford, 2019)