Hidden stories of Jewish
Bratislava: 1, Aron Grünhut,
a hero in the Holocaust 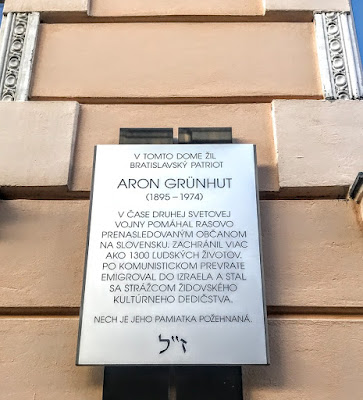 A plaque on Heydukova Street in Bratislava marks the former home of Aron Grünhut (1895-1974), involved in heroic rescues during the Holocaust (Photograph: Patrick Comerford, 2019)

As I pored over my photographs from Bratislava in recent days, I realised I had also come across many other stories of Bratislava’s Jewish communities, including a world chess grandmaster and author, the lost portal of a mediaeval synagogue, an antiquarian bookshop, an international wrestler, a visiting Russian pianist and composer, and a man who stood up bravely to anti-Semitic gangs.

Across the street from the synagogue on Heydukova Street, a discreet plaque in Slovak, with two letters in Hebrew, commemorates Aron Grünhut (1895-1974), a businessman and Orthodox community activist who should be celebrated for his many heroic and humanitarian acts during the Holocaust.

Aron Grünhut was born in Bratislava, then known as Pressburg, on 31 March 1895, one of eight children in pious Orthodox Jewish family. His father, Viliam Grünhut, was an innkeeper whose family originally came from Velky Meder, now in south-west Slovakia; his mother, Fani (Weisz), came from a landowning family in neighbouring Dunajska Streda.

Viliam Grünhut died when Aron was only 11, and the children were brought up by their mother Fani, who opened a restaurant on Zámocká Street in Bratislava.

During World War I, Aron Grünhut served as a hospital orderly in the Austro-Hungarian army. After the war, he married Etel Wosner from a wealthy Jewish family from Dunajská Streda in 1919. They were the parents of five sons: Otto, Leo, Joseph (Akiva), Benjamin and William. The family lived on Ventúrska Street in Bratislava and later moved to Heydukova Street, across the street from the synagogue.

In the inter-war years, Grünhut ran a food business, exporting foie gras to Strasbourg , selling French pastries, and running a Jewish canteen. He was a member of the city’s Chamber of Commerce and Industry and was active in Orthodox Jewish community life. He chaired the Chevra Kadish burial society and was on the board of the newly-built Jewish Hospital on Šulekova Street and several charities.

Grünhut’s business interests involved travelling throughout Europe, and he witnessed the change in the political landscape in Europe with the rise of Hitler, realising the horror the rise of the Nazis posed for Jewish communities.

Following the Anschluss of Austria, Grünhut rescued a 28-member group of Jewish refugees from Frauenkirchen in Burgenland in eastern Austria. They were caught as they fled through Hungary. Grünhut prevented their forced return to Austria, and arranged for their transport across the Danube and their settlement in Slovakia.

Grünhut was also involved in rescuing a group of Jewish refugees from Kittsee in east Austria, on the border with Slovakia. As they fled across the Danube, they became isolated on the island of Sihoť. Grünhut was a key figure in a rescue operation that lasted several months when hundreds of refugees were forced to live on a tugboat on the Danube. He arranged travel documents that allowed all of them to travel on legally travel.

At the same time, Grünhut built a tent camp for several hundred homeless Jews gathered near Dunajská Streda and arranged for them to travel to Palestine.

At great personal risk, Grünhut travelled to Vienna in October 1938 to rescue Juda Goldberger, a clothing merchant who was abducted from Bratislava at the command of the Gestapo and was held prisoner in Austria. Grünhut then helped Goldberger and his family to escape to the US.

When Grünhut learned about Kindertransports to England, organised by Sir Nicholas Winton in Prague, he arranged for a group of Jewish children to travel from Bratislava. The 10 boys, including his son Benny, were given travel documents, and they all reached London in June 1939.

Years later, it was discovered that the boys rescued by Grünhut included Yitzchok Tuvia Weiss, a future Chief Rabbi of the ultra-Orthodox Edah HaChareidis community in Jerusalem, Rabbi Kurt Stern MBE of Stamford Hill, London, and the journalist Paul Kohn.

Grünhut’s most daring rescue operation was in July 1939, when he tried to get as many Jews as possible to safety in Palestine. He chartered two luxury Danube steamboats, Queen Elizabeth and Tsar Dusan, that sailed from Bratislava with 1,365 refugees from Slovakia, Austria, Bohemia and Moravia.

The voyage was originally expected to take six days, but was delayed by Bulgarian and British authorities, and the refugees spent more than four weeks in international waters on the Danube. Through Grünhut’s negotiations, they were allowed to enter the Romanian port of Sulina transfer to the cargo ship Noemi Julia, and after another 83 days on board they reached the port of Haifa in British-mandated Palestine.

At first, Grünhut refused to leave Bratislava at the outbreak of World War II. He worked at the Jewish Centre and was active in the Jewish resistance until he was arrested at the end of 1942. The authorities failed to prove any crime, and he was held as a political prisoner in Ilava for several months until friends and family secured his release in May 1943.

Meanwhile, Etel Grünhut and their youngest son had escaped to Hungary. Following his release, he followed them there and they lived in Budapest with false identities and hiding in the former Czechoslovak embassy.

As World War II drew to a close, Grünhut returned to Bratislava on 10 May 1945. There, in his own words, he was shocked to find ‘streets without Jews, looted flats.’ He set about helping Jews who returned from the concentration camps, finding housing and medical care for survivors of the Holocaust. At the same time, he worked at restoring the life of the Jewish Orthodox community.

When the communists came to power in Czechoslovakia in 1948, Grünhut and his family decided to emigrate to Israel. There he was active in re-establishing the Pressburg Yeshiva and synagogue, which had been founded by Chatam Sofer and had relocated from Bratislava after World War II. He was also active in preserving the memory of Bratislava’s Orthodox life. Grünhut campaigned to save the Orthodox Jewish Cemetery in Bratislava and was involved in the restoration of the Chatam Sofer memorial.

Grünhut’s memoirs, Katastrophenzeit des slowakischen Judentums, were published by the Pressburg Jewish community in Tel Aviv in 1972. He died in Tel Aviv on 6 May 1974.

After his death, Grünhut’s role in Slovakia was almost forgotten and his name passed into oblivion under the communist regimes. In recent years, the journalist Martin Mózer rediscovered his story, including his part in the resistance and his roles in rescuing persecuted Jews and Sir Nicholas Winton’s Kindertransport.

Mózer’s search for Grünhut’s story resulted in the exhibition, ‘Aron Grünhut, Saviour of the Jews, Human Rights Fighter,’ first held in the Slovak Ministry of Culture in Bratislava in September 2014. The memorial plaque on his former house on Heydukova Street was unveiled on 7 October 2015.

The exhibition was also hosted at the Slovak Embassy in Dublin earlier this year, and was opened on 5 June 2019 by Tomi Reichental, one of three living Holocaust survivors in Ireland, Joe Veselský, whose family died in concentration camps and who was actively involved in the Slovak anti-fascist resistance, and Martin Mózer. The exhibition marked the 80th anniversary of Grünhut’s organisation of the shipping rescues.

Due to his heroic acts, Grünhut undoubtedly can be compared to key figures such as Oskar Schindler and Sir Nicholas Winton.

The two Hebrew letters on his memorial, ז״ל‎ (ZL), are an abbreviation of the saying זיכרונו לברכה, ‘May his memory be blessing.’ 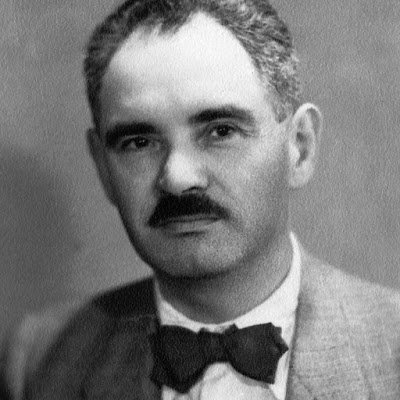