The influence of two
architects on the Trinity
boathouse at Islandbridge 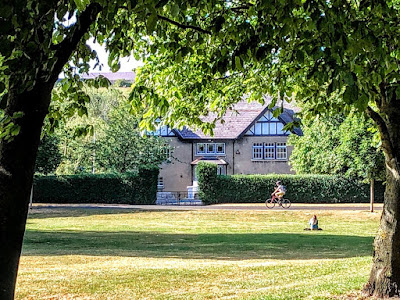 During my walk along the River Liffey, from Islandbridge to Chapelizod and back again earlier this week, I began and finished at the Tudor-style boathouse of the Dublin University Boat Club (DUBC) and Dublin University Ladies Boat Club (DULBC), in a sylvan, riverside setting beside the Irish War Memorial Gardens.

The Trinity boathouse stands out from all the other boat clubs on the banks of the River Liffey at Islandbridge, not only as the only boathouse on the south bank of the river, but because of its architectural taste and style.

This idyllic site was bought in the late 1890s. An unkind commentator has contrasted the Trinity boathouse with the University College Dublin (UCD) boat house upstream, on the opposite bank of the river, declaring: ‘The shed-like structure of breeze block walls and aluminium roof sits ignorantly in its surroundings like a humble cow chewing its cud, existing in a different league altogether.’

The black-and-white Tudor style also reflects the boat club colours of black and white, perhaps an unintended or coincidental element in the design. But it is also associated with the two work of two interesting architects.

The clubhouse was designed in 1897 by the Belfast architect William Godfrey Ferguson (1855-1939). He was articled to Charles Lanyon, and later spent seven years in London, working with John J Stevenson and ER Robson and at the London School Board. He had returned to Belfast by 1883, and after practising on his own he joined the practice of John Harris Hazlitt Swiney and John Ernest Croasdaile.

Ferguson was the architect of the Northern Banking Co and designed many of its branch banks throughout Ireland. He was a fellow of the Royal Institute of British Architects (FRIBA) and a founding member of the Society of Architects in 1884.

Ferguson was a parishioner of Saint Peter’s Church, Antrim Road. He was a magistrate, a member of the Grand Jury, and High Sheriff of Co Antrim in 1935. In his later years, he was involved in prisoners’ welfare and was secretary of the Church Army. He died on 25 August 1939.

The entrance to the Trinity boathouse is sedate, with only a hint in the apex of the two gables of the Tudor style of the rest of the building. This part of of the building is three bays and two storeys, and is modest in contrast to the waterfront façade, where an overhanging pavilion stretches across seven bays.

The ground floor is filled with stacks of boats, oars and other equipment, with wide barn-like doors facing the River Liffey. A broad flight of stairs leads directly to the first floor and to the main reception room. It is plain and generously proportioned with seven glazed French doors.

On the first floor, the seven tall French doors open onto the gabled pavilion, hugging the structure and acting as a viewing platform. This transitional space between interior and exterior is an early 20th century addition by the architect Ruldolf Maximillian Butler (1872-1943). 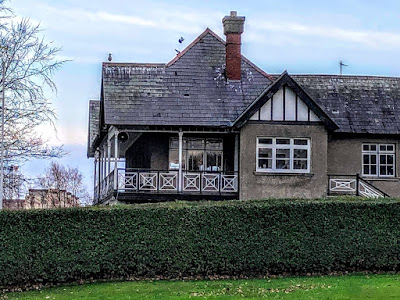 The black-and-white Tudor-style features reflect the boat club’s colours … an unintended or coincidental element in the design (Photograph: Patrick Comerford, 2020)

Butler was born in Dublin on 30 September 1872. His father, John Butler, was a barrister from Carlow; his mother, Augusta Brassart, was from Schleswig-Holstein. He was educated in Dublin until he was 10, when his father died. At the time of his father’s death, Rudolf was on a Christmas holiday with his mother in Germany, and he stayed on in Germany to finish his education.

He stayed on as Doolin’s assistant from 1896 to 1899, when he became his junior partner. When Doolin died in 1902, Butler carried on the practice in partnership with James Louis Donnelly as Doolin Butler & Donnelly. Butler was also architect and engineer to Rathdown Rural District Council, and in that role he designed some 500 cottages in Co Dublin and Co Wicklow.

Butler was brought up a Moravian, but was largely engaged in Catholic church work, first through his association with Doolin. When he was 23, a chance encounter with an Irish Passionist, Father McMullen, in a train in France resulted in the commission to design part of the Passionist chapel in the Avenue Hoche, Paris. This probably led to his commissions for the Passionists in Ireland, including the church and monastery at Ardoyne, Belfast (1900-1902) and a new college in Enniskillen (1917).

In the 1911 census, he gave his religion as ‘Catholic Church’ rather than the usual ‘Roman Catholic.’

Butler’s first major architectural success came in 1912, when he won first prize in the competition for designing University College, Dublin. He was appointed examiner in architecture of the National University of Ireland in 1923 and became the first Professor of Architecture at UCD in 1924. When the RIBA conference took place in Dublin in 1931, he received the honorary degree of Master of Architecture from the NUI.

He was involved in establishing the Georgian Society, and in 1899 he became the editor and, for a for a few months, co-proprietor, of the Irish Builder. The magazine was sold in 1900, but Butler remained editor until 1935.

Butler and his Annie Gibbons from Co Mayo were the parents of a son and three daughters. His son John Geoffrey Butler and his daughter Eleanor Grace Butler carried on the practice after his death.

I knew his daughter, Eleanor Butler (1914-1997), also known as Lady Wicklow, through her role in the Glencree Centre for Reconciliation.

Eleanor Butler was born on 7 September 1914, and suffered a polio attack at age six. She went to school at Tudor Hall, Kent, and Alexandra College, Dublin, and after earning a degree in architecture from UCD in 1938, she suffered a riding accident that required a year of care in Saint Vincent’s Hospital. Her childhood polio and her riding accident almost left her without the ability to walk.

Her father’s influence pushed her towards public life, and he urged her to base her morality on Catholic social teaching and social justice. She became a Labour member of Dublin Corporation, and ran as a Labour candidate for the Dáil in 1948. She was nominated to the Senate by John A Costello in 1948 and remained a senator until 1951. Throughout her life, she maintained strong links with the trade union movement and her friendship with Denis Larkin.

After qualifying as an architect, she became honorary secretary of the Irish Architectural Records Society, and became friends with the poet John Betjeman, then press attaché at the British embassy in Dublin. Through Betjeman, she met her future husband, William Howard (1902-1978), then known as Lord Clonmore or Billy Clonmore.

He had been ordained a deacon and priest in the Church of England and was an active Anglo-Catholic slum priest in the East End of London, working with the Magdalen Mission. When he became a Roman Catholic in 1932, he was disinherited by his father. He succeeded his father as eighth Earl of Wicklow in 1946, and the couple married in Glasthule on 2 September 1959.

As Lady Wicklow, she was deeply concerned about the violence in Northern Ireland in the 1970s. Under her leadership, 20 women’s organisations joined together to work for peace, eventually creating groups such as the Southern Movement for Peace, Co-operation North, and the Ireland Fund of America, and she was a co-founder of the Glencree Centre for Reconciliation. She died on 21 February 1997. 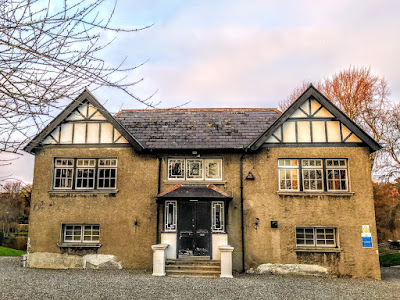 The entrance to the Trinity boathouse is sedate and modest in contrast to the waterfront façade (Photograph: Patrick Comerford, 2020)