A summer afternoon
by the boathouses on
the Liffey at Islandbridge 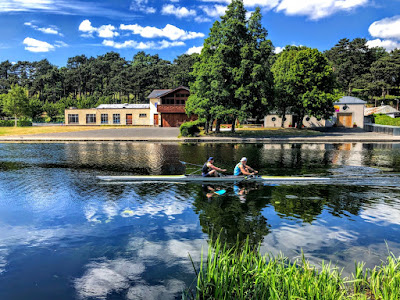 Reflections on the River Liffey by the boathouses at Islandbridge (Photograph: Patrick Comerford, 2020)

I am in Dublin for a check-up this evening with my GP about my pulmonary sarcoidosis and to receive a much-needed B-12 injection.

This is my first time outside Co Limerick since March, and the June sunshine has brought real my pleasure to my time here.

Two of us spent a few hours in yesterday’s afternoon sunshine walking along the south bank of the River Liffey from Islandbridge to Chapelizod, from the Dublin University Boat Club to the bridge over the river at Chapelizod, and back again to the War Memorial Gardens.

The Trinity boathouse in Islandbridge is the only boathouse on the south bank of the Liffey, with a series of boathouses lining the opposite bank of the river.

The Trinity boathouse, with its Tudor-style gable fronts and black lacquered wooden supports reflects the club’s colours of black and white. This late Victorian building was designed in 1897 by the Belfast architect William Godfrey Ferguson (1855-1939). 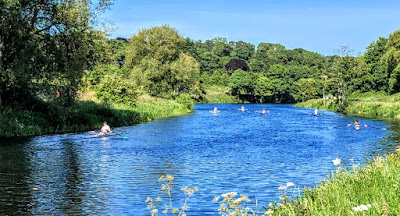 On a bend on the river between Islandbridge and Chapelizod (Photograph: Patrick Comerford, 2020)

The endearing charm of the Trinity boathouse is a sharp contrast with the University College Dublin (UCD) boathouse and other boathouses upstream, with their shed-like structures of breeze block walls and aluminium roofs. The UCD clubhouse has been described unkindly by one critic at sitting ‘ignorantly in its surroundings like a humble cow chewing its cud.’

As we walked briskly along the south bank of the river, more and more single scullers took to the water, making the best use of the early summer afternoon sunshine.

I have remarked at times that had I gone to Cambridge earlier than in my 50s I would have learned to row. May father tried to teach me to row when I was 15. You are never too young, or too old, to learn to row. During my walk along the Deel in Askeaton on Sunday, Patsy McCarthy was urging me to get involved in the Desmond Rowing Club again this summer, once the Covid-19 restrictions are lifted.

Beneath the willows on the River Liffey (Photograph: Patrick Comerford, 2020)

At times on Monday afternoon, it was reminiscent of walking along the Backs in Cambridge – without the temptation of stopping at the Fort St George on Midsummer Commons for a glass of chilled white wine or even to share a jug of Pimms.

Here the willows dipped into the river, a reminder of Dr Johnson’s willow at Stowe Pool in Lichfield; there the trees framed a scene of tranquillity; a little further on, as we got closer to Chapelizod, the tower of John Bourke’s Victorian Gothic church rose above the trees, like a scene in a Constable painting.

We stopped in Chapelizod for a takeaway double espresso at Café de Bróc. The Bridge Bar was closed, but two men were standing outside on the bridge, enjoying the sunshine, and below the bar two or three small boats were tied against the steps leading down to the river.

We crossed the Anna Livia Bridge, stopped to look at Mullingar House, which is also closed, and mused about Finnegans Wake and James Joyce, and wondered how Bloomsday would be marked next week (16 June 2020), and then stopped to look into Bourke’s church, built in the immediate aftermath of Catholic Emancipation in the mid-19th century.

We decided to turn back and walk back along the south bank of the river towards Islandbridge. By now, the river was busy with scullers and the path was busy with coaches on bicycles, encouraging the mixed groups on the water.

Some were just beginners, many were well practised, others were experienced and glad to be back on the water. This is a complete sport, exercising all parts of the body and the mind too. 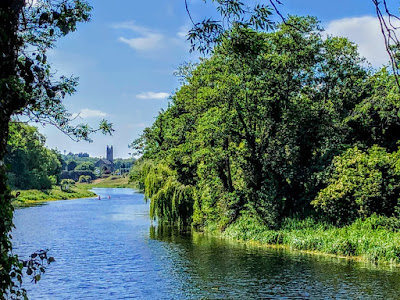 Gandon’s former Royal Hibernian Military School – now Saint Mary’s Hospital – stood out in a gap in the trees as we looked across to the Phoenix Park, and we thought what a sad experience Covid-19 has been for everyone there.

We finally returned to the War Memorial Gardens, designed by Sir Edward Lutyens, with its sunken rose gardens and granite paved pergolas. It is dedicated ‘to the memory of the 49,400 Irish soldiers who gave their lives in the Great War, 1914-1918.’ How many more lost their lives when they returned home and died from the Spanish ’Flu in 1918-1919?

A domed temple stands at the north of the Gardens overlooking the River Liffey. This also marks the beginning of the avenue leading gently up to the steps containing the Stone of Remembrance, inscribed: ‘Their name liveth for ever more.’

On the floor of the Temple are lines from the War Sonnett II: Safety by Rupert Brooke:

We have found safety with all things undying,
The winds, and morning, tears of men and mirth,
The deep night, and birds singing, and clouds flying,
And sleep, and freedom, and the autumnal earth. 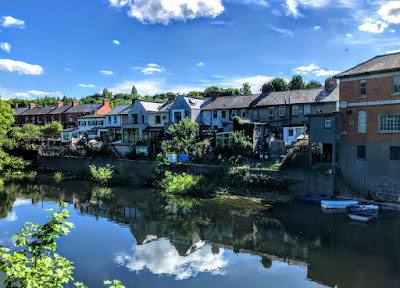