A new experiment
with a once forgotten
opportunity on YouTube 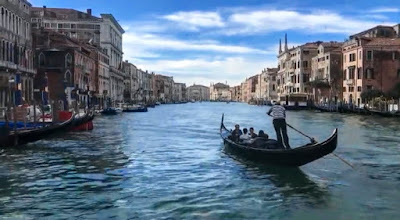 How was I going to save and share memories from two years ago of 45 seconds on the Grand Canal in Venice? (Photograph: Patrick Comerford)

I have started in the last week or so to experiment with building up my own YouTube channel.

I had become quite adept in recent years in developing my use of other social media platforms, including my own blog, and my Facebook, Twitter, Instagram and Pinterest pages – and, sometimes, even managing to link them.

But YouTube seemed to keep avoiding my attention until recently.

I have had a YouTube account since 2011, and became aware of the potential of YouTube when David Moore interviewed me in the chapel of Saint John’s Hospital, Lichfield, early in 2015 for a series of five short three- to eight-minute films about my life, my ministry, my values and my family connections with Lichfield.

It is not that I had ignored YouTube since then – quite the opposite. Like many people, I have used it to listen to music, catch up on short documentaries, hear other people’s sermons, or watch the occasional movie.

I rediscovered YouTube during the recent pandemic lockdowns as a way to keep up my daily walking average as I paced around the rectory gardens, listening to music or talks and having my mind broadened.

In recent months, as the lockdown has returned in different stages and with varying intensities, I started to record my Sunday sermons and to post them on different platforms. Soon, I found the Facebook viewings of Sunday sermons could total 200, 300 or even more. It was a viewing audience I had never expected, and it surpassed all my expectations.

For some time, I had also been posting short videos on Facebook with a theme of ‘30 seconds’ – 30 seconds on a beach, by a riverbank, or in the countryside, or the occasional video collection of photographs that had been put together by Google.

But there is a problem with Facebook videos and recordings. They are there for a few days … and then they are gone. Few people are going to scroll through their feed for a week or more to find the previous Sunday’s sermon or 30 seconds from the beach in Ballybunion or by the River Blackwater in Cappoquin. I know how to find them in my own Facebook files, but it is difficult for anyone else to … and, in any case, who is going to bother?

Longer videos seldom appear as an option for reposting as a memory on Facebook. In addition, recordings take up a lot of space on my phone. If I wanted to save them, and allow other people to find them, I wondered, how I could archive them?

I was then reminded of my own almost-forgotten and much-neglected YouTube channel that had been dormant since 2011.

I began with a sermon recorded for Nagasaki Day, 9 August 2020, recorded in Saint Mary’s Church, Askeaton, for the Anglican mission agency USPG (United Society Partners in the Gospel).

As I experimented with my newly-rediscovered YouTube channel, I also saved those five interviews in Lichfield with David Moore, and started experimenting with making my own themed video-clips with photographs taken over the years, including a collection of photographs from Saint John’s Hospital in Lichfield, a summer day in Tamworth, Comberford and Lichfield, Lichfield at night, Vicars Close in Lichfield, and a stroll around Comberford village, between Lichfield and Tamworth in Staffordshire.

In addition, I have added a playlist of those five short films made by David Moore in association with the local history and environment groups, Lichfield Discovered and the Friends of Sandfields Pumping Station, and with the hospitality of Canon Andrew Gorham, then Master of Saint John’s Hospital, and the staff and residents of Saint John’s:

A Self Defining Moment, first published on 21 January 2015, when I talk to Dave Moore talk about my own self-defining moment, and the scenic route I took to ordination and priesthood;

Lichfield and the Comerfords, published on 21 January 2015, when I talk to Dave Moore about my connection with Lichfield and my links with the Comberford family;

The Vision, the third, published on 26 January 2015, and has been described by Dave Moore as a ‘very powerful and moving film,’ when I talk about my grandfather, Stephen Comerford, and the impact on him of World War I;

The Causes of War, published on 12 February 2015, in which I talk about the causes of war, and the impact of nationalism;

Humanity, the fifth and final film in the series, when I talk to David about those personal feelings that define my views of humanity, and how I answered the call to ordained ministry in the Anglican tradition.

The pandemic lockdown has also prevented me from visiting the school in Rathkeale, apart from meetings of the Board of Management. But now YouTube provides another fresh opportunity of making those links.

These are small beginnings. But this is an interesting experiment, and it is work in progress. 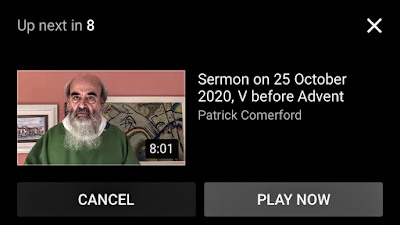