Finding another family
link with Wexford town
over a century ago 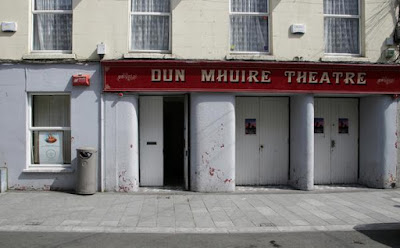 The Dun Mhuire Theatre, South Main Street, Wexford … now closed but once an RUC barracks and the home of my great-uncle and his family

As I was walking around Wexford during my recent return visit two months ago (2-3 September 2020), I was very happy to have in my hands Nicky Rossiter’s book, Main Street, Heart of Wexford (Stroud: History Press, 2018).

In the early and mid-1970s, I had lived on High Street, but worked on Main Street, went to church there, spent time at back-room meetings in smoke-filled rooms in the Corish Memorial Hall, had my bank account, and was more than familiar with the Tower Bar and the coffee shop and bars in White’s Hotel. I was also on the committee of the YMCA beside White’s, where I organised many poetry readings and folk sessions.

While I was living on High Street, I joked that I was only a stone throw from houses on John Street where members of many previous generations of the Comerford family had lived before me.

I was confident about my Comerford family links with Wexford, and – although I was born in Dublin – this was home for me, and I feel was back at home every time I go back.

But Nicky Rossiter’s book made me ask was there was another family connection with Wexford apart from the Comerford family links.

I searched, and I searched. I had found no Lynders family connection with Wexford in recent years. But the name is unusual enough, and for the past two months I was wondering what the connection.

The on-line index for the 1911 census was not helpful either: an Allen Lynders appeared, but I knew of no Allen Lynders in my grandmother’s family about a century ago.

And there it rested, or so it seemed. That was until an email conversation and exchanges earlier this week with a cousin who is the true genealogist in the Lynders family.

My grandmother, Bridget Lynders (1875-1948), was the second of five children of Patrick and Margaret (McMahon) Lynders of The Quay House, Portrane, Co Dublin, and married my grandfather, Stephen Edward Comeford (1867-1921), in Donabate on 7 February 1905.

But my conversations earlier this week led me to the story of her elder brother, John Lynders (1873-1957), my great-uncle, who was a sergeant in the Royal Irish Constabulary in the difficult years in the first quarter of the 20th century.

John Lynders, who was two years older than my grandmother, was born in Portane on 11 January 1873. He joined the Royal Irish Constabulary (56897), became a Sergeant in the RIC and was later a Head Constable. He married Mary Ellen Reardon (1881-1963) from Fermoy, Co Cork.

John Lynders was living at the RIC Barracks, South Main Street, Wexford, when his children were born in 1908 and 1911, and at the time of the 1911 census. The name of John Lynders is given incorrectly as Allen Lynders in the online index to the 1911 census and their daughter Eileen Mary as Aileen M. But John is registered separately, a normal procedure for the police at the 1901 and 1911 census, and I had found it difficult to identify this Lynders family in Wexford – my grandmother’s brother and my father’s uncle, aunt and cousins.

These were difficult times for members of the RIC in those early decades of the 20th century. I have written in recent month (29 July 2020) of the scandalous events surrounding the murder in the Bullring on 7 May 1910, when 18-year-old Mary Anne Wilde was murdered by Simon Bloom – an event that is said to have influenced some of the characters created by James Joyce in Ulysses.

But 1911 was an even more harrowing year in the history of Wexford town. This was the year of the Wexford lockout, eclipsed in size only by the lockout in Dublin in 1913. Doyle’s Selskar Ironworks were the first to lock out their men on Monday 10 August 1911. A little over a fortnight later, Pierce’s locked out close to 400 men, while the Hearns, proprietors of Wexford Engineering, locked out nearly 200 men on 29 August.

The most serious incident occurred in September, when Michael O’Leary, on his way to buy groceries, got caught up in a baton charge on Bride Street between workers and the police. He received repeated blows to his head and died from his injuries five days later.

The lockout ended with settlement in February 1912 that allowed for the formation of the Irish Foundry Workers’ Union as an associate of the ITGWU. The foundry men, skilled and unskilled, could combine and return to work – all except for Richard Corish (1886-1945), who was blacklisted by the employers. He became a full-time trade union official and was Mayor of Wexford (1920-1945) and Labour TD for Wexford (1921-1945). 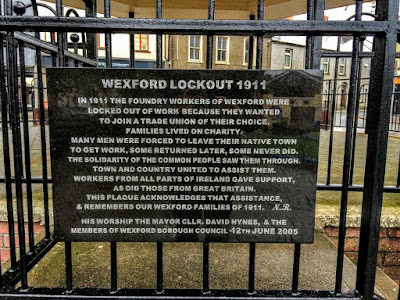 John Lynders was a sergeant in the RIC in Wexford during those turbulent times. His wife Ellen returned to Fermoy for the birth of their two children – Eileen Margaret on 19 January 1908, and Patrick Joseph Lynders on 28 September 1911. But they continued to live in the RIC Barracks on South Main Street, Wexford.

This building was originally the Wexford townhouse of Richard Devereux, one of the great shipowners in 19th century Wexford. Richard Joseph Devereux (1829-1883) was a Liberal MP for Wexford (1865-1872) while his brother, John Thomas Devereux, was MP for Wexford (1847-1857) before him.

The Devereux brothers were merchant princes in Victorian Wexford, and Richard Devereux owned one of the largest fleets of sailing ships in Ireland, bringing the first cargo of Indian corn to Wexford during the Famine.

When Richard Devereux died in 1883, the reliquary of Saint Adjutor, which he had received as a gift from Pope Pius IX and brought to Wexford in 1856, was moved from his house to the Franciscan Friary. The waxen figure of boy martyr is now enshrined in a glassed, enclosed reliquary at the back of the Friary Church in Wexford.

At the same time, Devereux’s townhouse became a presbytery for the Catholic priests of Wexford in 1883. When they moved to the presbytery in School Street in 1893, it became the RIC barracks.

John Lynders was a sergeant in Duncannon, Co Wexford, by 1917, and was later transferred from Wexford to Ballymahon, Co Longford (1919-1922), where he was a Head Constable. Just 100 years ago, on 18 August 1920, an IRA group led by Seán Mac Eoin and Seán Connolly, raided the RIC barracks in Ballymahon and captured 10 rifles, four revolvers, 12 grenades and ammunition.

As for the RIC Barracks in Wexford, when the RIC was dissolved at the formation of the Irish Free State in 1922, the Garda Siochana took over. When the Gardai moved into their then new station in Roche’s Road, the building was used by the Legion of Mary and the Catholic Girls’ Club from 1938.

The Dun Mhuire Theatre was opened there by Bishop James Staunton of Ferns on Sunday 4 December 1960, followed by a concert with Veronica Dunne, Michael Murphy and the Artane Boys’ Band.

The Dun Mhuire Theatre was at the heart of cultural life and entertainment in Wexford Town for decades. The Wexford Drama Festival, established in 1963, the year was staged at the Dun Mhuire Theatre every year for 56 years until last year. Initially it was devised as a source of entertainment during Lent, when dances did not take place in the hall, giving the local community an outlet and keeping the Dun Mhuire in use. The festival regularly welcomed 250 theatre goers for each show, with 300 or 350 people on opening and closing nights.

The theatre was also a venue for Christmas pantomime, the Light Opera Society, and other groups. Dun Mhuire has made an important contribution to the social and artistic fabric of Wexford town. Other groups who used the theatre on a day-to-day basis included Alcoholics Anonymous, the Girl Guides, the Confraternity Band and the Legion of Mary.

The Wexford Drama Festival recently moved its home to the Jerome Hynes Theatre at the National Opera House, formerly the Theatre Royal, on High Street.

The Dun Mhuire Theatre is now closed and is said to be in a serious state of disrepair. The theatre is owned by the Parish of Wexford and in recent years there have been reports of plans to sell the theatre to Wexford County Council as part of part of plans for the redevelopment in the South Main Street and Crescent Quay area and the Trinity Wharf Development. 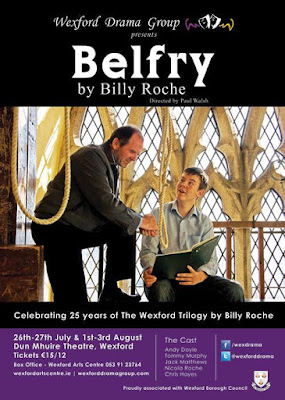 Update 11 November 2020, to include reference to Duncannon

Tops of the Town held in Dun Mhuire in the 1980s