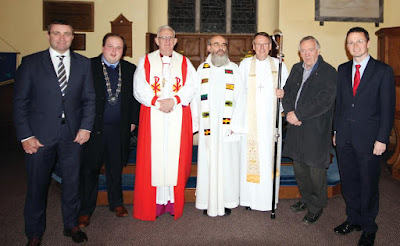 The introduction to the Rathkeale Group of Parishes four years ago, on 20 January 2017, with Archbishop John Neill, Bishop Kenneth Kearon and local dignitaries

I am what they call a ‘news junkie.’ So, I imagine that, like many people, I am going to spend much of today watching the news from Washington and the inauguration that marks the beginning of four years of presidency for Joe Biden and the end of the four years of the Trump presidency.

But, before those momentous moments unfold, I am celebrating the Eucharist, celebrating my four years as priest-in-charge of this group of parishes in west Limerick and north Kerry (Rathkeale and Kilnaughtin).

Bishop Kenneth Kearon introduced me to this parish in Holy Trinity Church, Rathkeale, on Friday 20 January 2017, and Archbishop John Neill preached that evening.

These have been four years that have been interesting, challenging, delightful and fulfilling – all at once.

If you had asked me the year before that, I would not have expected to be here. But then, I imagine the parishioners did not know what to expect either. And none of us could have expected a year like the past year.

After a career that included 15 years lecturing in the Church of Ireland Theological Institute (four part-time and eleven full-time) and almost 30 years as a journalist, I was looking forward to a few years experiencing normal parish life, in a normal parish, with normal people; the weekly round of Sunday services, school assemblies and home visits; the round of baptisms, confirmations, weddings and funerals; the cycle of Advent, Christmas, Epiphany, Lent, Holy Week, Easter, Pentecost … and, of course, what we call in the Church ‘Ordinary Time.’

Little could any of us have foreseen a year that would go without public celebrations of those key events of Christmas, Good Friday and Easter.

As the years roll over, the Lectionary readings for weekdays often throw-up surprises. If we don’t read them day-by-day, realising they are reflections on the previous Sunday’s readings, or preparing for the following Sunday’s readings, then the selection of the weekday readings can appear to be whimsical, of a random nature.

Yet, in this morning’s readings, both the Psalm and the Epistle reading include the words: ‘You are a priest for ever after the order of Melchizedek’ (Psalm 110: 4; Hebrews 7: 17).

Later this year, I hope to celebrate 20 years of ordination as a priest.

But I did not come here for that. I came here because I was asked, not because I asked to. And I came not to boast about growing numbers or figures, but instead that we might grow more and more deeply in love … in love of God and love of others.

I have no sermons other than we should love God and love others.

And, yet, in these four years, Barbara and I have received more than we have given. The generosity, friendship, care and hospitality offered by parishioners over the past four years hves been abundant and a blessing. And we hope we are learning to return these in some small measure.

1 This ‘King Melchizedek of Salem, priest of the Most High God, met Abraham as he was returning from defeating the kings and blessed him’; 2 and to him Abraham apportioned ‘one-tenth of everything’. His name, in the first place, means ‘king of righteousness’; next he is also king of Salem, that is, ‘king of peace’. 3 Without father, without mother, without genealogy, having neither beginning of days nor end of life, but resembling the Son of God, he remains a priest for ever.

15 It is even more obvious when another priest arises, resembling Melchizedek, 16 one who has become a priest, not through a legal requirement concerning physical descent, but through the power of an indestructible life. 17 For it is attested of him,

‘You are a priest for ever,
according to the order of Melchizedek.’

1 The Lord said to my lord, ‘Sit at my right hand, ●
until I make your enemies your footstool.’
2 May the Lord stretch forth the sceptre of your power; ●
rule from Zion in the midst of your enemies.
3 ‘Noble are you on this day of your birth; ●
on the holy mountain, from the womb of the dawn
the dew of your new birth is upon you.’
4 The Lord has sworn and will not retract: ●
‘You are a priest for ever after the order of Melchizedek.’

3 Again [Jesus] entered the synagogue, and a man was there who had a withered hand. 2 They watched him to see whether he would cure him on the sabbath, so that they might accuse him. 3 And he said to the man who had the withered hand, ‘Come forward.’ 4 Then he said to them, ‘Is it lawful to do good or to do harm on the sabbath, to save life or to kill?’ But they were silent. 5 He looked around at them with anger; he was grieved at their hardness of heart and said to the man, ‘Stretch out your hand.’ He stretched it out, and his hand was restored. 6 The Pharisees went out and immediately conspired with the Herodians against him, how to destroy him.

Almighty and everlasting God,
by whose Spirit the whole body of the Church
is governed and sanctified:
Hear our prayer which we offer for all your faithful people,
that in their vocation and ministry
they may serve you in holiness and truth
to the glory of your name;
through our Lord and Saviour Jesus Christ. Amen

Within the royal priesthood of your Church
you ordain ministers to proclaim your word,
to care for your people,
and to celebrate the sacraments of the new covenant:

Heavenly Father,
whose ascended Son gave gifts of leadership
and service to the Church:
Strengthen us who have received this holy food
to be good stewards of your manifold grace;
through him who came not to be served but to serve,
and give his life as a ransom for many,
Jesus Christ, our Lord. Amen

‘You are a priest for ever after the order of Melchizedek’ (Psalm 110: 4; Hebrews 7: 17) … an icon of Christ the Great High Priest in the parish church in Tsesmes, near Rethymnon in Crete (Photograph: Patrick Comerford)

Thank you for letting us in on your 4 year anniversary. Also for your focus on Melchizedek, a priest for ever. It was good to be reminded of the foundations on which we build as priests. And the anti-cultural inheritance we receive. Blessings for your next anniversary. Come September, I hope to celebrate my 53rd anniversary as a priest and still wonder if I really exercised a worthwhile priesthood. This regardless of projects achieved. Experience has taught me that one's real affect in ministry is hidden in a thousand lives, for good or ill, in other words, it is often in the throwaway remark, comment or action that has been heard. A former CMS missionary, Dr Eileen Snow, said in 1964 that, she was trained to not spend her time asking about results but to seek to do everything to the best of her ability. At the time she said this she was long retired.