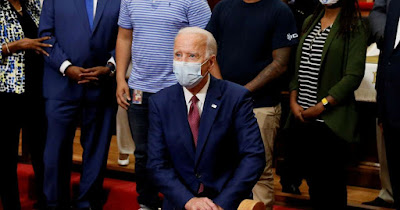 The Presiding Bishop of the Episcopal Church, Bishop Michael Curry, has suggested this prayer at this time:

With malice toward none, with charity toward all. With firmness in the right, as God gives us to see the right. Let us strive to finish the work, the work that we are in. To bind up the nation's wounds, to care for him who shall have borne the battle and for his widow and his orphan. To do all which may achieve and cherish, a just and lasting peace among ourselves and with all nations.

Joe Biden is only the second Catholic to become US president, following John F Kennedy’s election in 1960. But in recent years, he has also been criticised by fellow Catholics for his voting on abortion legislation.

Some prominent Catholics have suggested that he ought to be barred from receiving Holy Communion at Mass, and some have even denied him Communion. However, Joe Biden remains a devout Catholic. In his speeches, he has quoted from Saint Francis of Assisi to the hymn ‘On Eagle’s Wings. He received a congratulatory call from Pope Francis after his election, and his invocation of his faith throughout his campaign suggests his Catholicism will be an important part of not just his inauguration ceremony today, but also his presidency.

The choice of clergy to pray at his presidential inauguration today is seen as a statement by the incoming president, telling the nation of the values he hopes inform his administration. Father Leo J O’Donovan, a Jesuit priest and theologian, will pray the invocation at the start of today’s service, and the Revd Silvester Beaman, a friend and confidant, will give the concluding benediction. Their participation in today’s inauguration places them in a long line of clergy who have prayed at inauguration events, stretching back to the second inauguration of Franklin Delano Roosevelt, an Episcopalian, in 1937.

Joe Biden and Leo O’Donovan have crossed paths many times over the decades. Father O’Donovan, from New York, was the president of Georgetown University from 1989 to 2001. A Vatican court ordered him in 1992 to defund a campus abortion rights advocacy organisation. That year too, while Biden’s son Hunter was a student at Georgetown, O’Donovan invited then-Senator Biden to give a lecture on how his faith informed his public service.

He preached at the funeral of Biden’s son Beau, the former attorney general of Delaware, who died at 46 with brain cancer in 2015.

Leo O’Donovan became director of mission at the Jesuit Refugee Service USA in 2016 and has since sharply criticised Trump’s immigration policies. Joe Biden wrote the foreword to Leo O’Donovan’s book Blessed Are the Refugees: Beatitudes of Immigrant Children in 2018.

Father O’Donovan’s prayer today will be seen as a statement of the new president’s continued connection to his Christian roots and values. President Biden has often spoken of his faith as a solace in a time of tragedy and sorrow at the death of his own family members. And that seems especially important for a president taking office in a time marked by suffering and grief for many Americans.

In his benediction, the Revd Silvester Beaman will invoke a blessing for those assembled. He is from Niagara Falls, New York, and a graduate of Wilberforce University. He is the pastor in Bethel African Methodist Episcopal Church, a predominantly Black church in Wilmington, Delaware.

Biden and Beaman have been friends since 1993, when Beaman moved to Bethel. He too took part in Beau Biden’s funeral service.

During the unrest and protests against racism and police violence following the death of George Floyd, Joe Biden met 15 Black community leaders at Bethel Church on 1 June 2020. There he promised to address institutional racism and set up a police oversight body during his first 100 days in office.

That meeting in Beaman’s church became fodder for three misleading and racist Trump campaign ads that used footage of Biden kneeling in the church in front of Beaman and other Black leaders. In one ad, the video was superimposed over images of violent protests, with the church context blurred out and a narrator saying, ‘Antifa destroys our communities. Rioting. Looting. Yet Joe Biden kneels down.’

In the second as, the footage was digitally altered to make it appear that Biden was alone and was cowering in fear and defeated, having all but given up campaigning.

The footage appeared a third time, this time in slow motion and with the Black leaders visible. The words ‘Stop Joe Biden and his rioters’ followed the footage, with audio of Mike Pence saying, ‘You won’t be safe in Joe Biden’s America.’

Silvester Beaman described the ad as ‘overtly racist’ and an ‘attack on the African American Church.’ He and other AME leaders signed a letter that denounced the ad and called on federal law enforcement to investigate it, as it ‘might incite violence, and encourage racial tensions that lead to placing people of colour in harm’s way.’

Silvester Beaman is aware of the location of today’s ceremony. ‘I will be standing in front of a building that slaves built and I will be standing at a podium that a mob desecrated,’ he told NBC News. ‘The last word that day will be the voice of God. I’m asking God to use me to channel his final grace upon the occasion and speak to the moment. And it’s an honour to do so.’

Meanwhile, attention has also turned to Sister Susan Francois, logs onto Twitter every day and shoots off a short prayer for Trump, tagging the @POTUS account rather than Trump’s now-suspended personal account.

America, the Jesuit review, reported last weekend that she began her public prayers three days after Trump’s inauguration in 2017, tweeting that she was praying for the President and the US and urging Trump to fulfil a campaign promise to release his tax returns. As America noted with tongue in cheek, ‘Some prayers, seemingly, go unanswered.’

She has told The New York Times that her commitment publicly to pray for Trump each day which is ‘the hardest spiritual practice I’ve ever committed to.’

Sister Francois entered the Sisters of Saint Joseph of Peace in 2005. Today, she serves on her congregation’s leadership team.

Her prayers have become more assertive following the violent storming of the Capitol by the president’s supporters two weeks ago.

‘It has been a crazy four years,’ she says. ‘And the way it’s ending is, perhaps, crazier though. Really, it’s just lifted the veil of what has been underneath everything.’