Haselour Hall, the ‘most
charming half-timbered
house,’ for sale at £3m 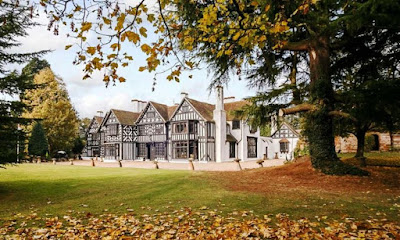 Sometimes, when I allow myself flights of fantasy, I dream of being able to buy back Comberford Hall or the Moat House on Lichfield Street in Tamworth. But these two former family homes in south-east Staffordshire have always been outside my reach, even in my wildest dreams, and I plant my feet firmly on the ground again within minutes.

In recent day, I have been writing about some houses like these, including Wall House, in Wall, south of Lichfield, and Pipe Hill House, just west of Lichfield.

Haselour Hall, a Tudor manor house just outside Harlaston in south-east Staffordshire, is on the market with an asking price of £2,995,000. It has been described on one site as the most expensive property in ‘B79,’ and is within the boundaries of Lichfield District Council, 4.6 km from Comberford, 5.5 km from Comberford Hall, 8.3 km north of Tamworth, and 12 km east of Lichfield.

Haselour Hall has was once described as ‘the most charming half-timbered house’ in Britain. The architectural historian, Sir Nikolaus Pevsner in his guide to Staffordshire was delighted with its ‘gorgeous black and white front of five gables.’

This is the house where the future Henry VII is said to have spent the night before his decisive victory at the Battle of Bosworth Field, and there are links too with the Comberford family of Comberford Hall, distant though they may be.

However, the history of this house goes back centuries before the War of the Roses. The name Haselour is of Saxon origin, derived from ‘hazelnut’ because of the large number of hazelnut trees on and around the land.

The house was once surrounded by a double moat, dating back to Norman times, and traces of it can still be identified. A house probably stood on the site of Haselour Hall when the Selvein family held the manor in the 12th century.

Gradually, the Ardernes of Elford became the dominant family at Haselour, ousting the Timmon family who had held the manor. Under them, the two manors of Haselour and Elford were united and remained so for many generations. Sir Thomas Arderne, who died in 1391, won glory in the French wars. It was he or his father who led men from Haselour and Elford men at the Battles of Crecy and Poitiers.

While the Stanley family were living at Haselour, the house played a role in the War of the Roses. Henry Tudor, Earl of Richmond and later Henry VII, is said to have spent a night at Haselour Hall, after slipping away from his march from Lichfield to the Battle of Bosworth Field with a small band of his guards in 1485 before his decisive victory in 1485.

The hall was then home to Henry VII’s mother, Lady Margaret Beaufort, who had married the powerful Thomas Stanley, 1st Earl of Derby, in 1472 after the death of her third husband, Sir Henry Stafford. She founded both Christ’s College and Saint John’s College in Cambridge, and has given her name to Lady Margaret Hall, Oxford.

While he was visiting his mother, Henry entreated Stanley, his step-father, to join him in battle against Richard III. Stanley, however, refused to choose sides, opting instead to remain neutral for a while longer before making clear their allegiance. This neutrality was so important to the Stanleys, that when Richard kidnapped one of Stanley’s sons to force him to join his ranks, Stanley replied laconically: ‘I have other sons.’

The Battle of Bosworth Field was the last significant battle in the War of the Roses. On the day of the battle, it is said that Stanley watched it unfold from afar, and when Henry defeated Richard III, Stanley rode down the hill from which he was watching, took the defeated king’s crown from his head and used it to crown Henry VII, only then pledgng his allegiance to the new king.

Much of the building is unmistakably Tudor, and the present house may have been built by the Stanleys. The black and white half-timber work of the South front gives Haselour Hall its characteristic Tudor appearance. Many original tiles are still on the roof and are said to date from 1550.

A tunnel reputedly lead across the fields from Haselour Hall to the Manor House in the centre of the village of Harlaston.

John Stanley died in 1508, leaving no male heir, and for many generations the manor of Haselour passed through female lines of inheritance. Eventually, it descended from the Huddlestones to the Brookes, when Lucy Huddlestone, the co-heiress, married John Brooke in 1557. Her sister, the other heiress, married Sir John Bowes, taking as her share of the inheritance the manor of Elford. So, the two manors were separated once again. 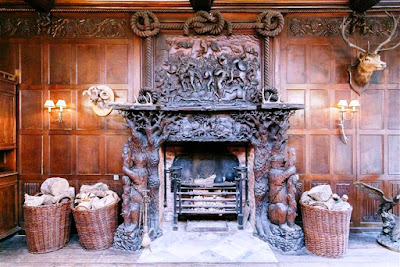 The Brookes, who held Haselour for over 200 years, were there at the time of the Civil War. It may have been due to impoverishment that they sold Haselour to Samuel Dilke in 1672, so bringing to an end the lineal descent from the Arderne family that had lasted for more than three centuries.

Haselour Hall was heavily restored by Augustus Henry de Trafford (1823-1895) when he came to live there in 1885. He was a member of an old Lancastrian Catholic family and the son of a Baronet. His family gives its name to an area in Manchester and well-known cricket and football grounds.

His sister, Jane Seymour de Trafford, married George Archer Shee. Their great-grandson, George Archer-Shee, was the subject of a notorious 1910 prosecution for allegedly stealing a 5 shilling postal order. The case formed the basis for Terence Rattigan’s play The Winslow Boy (1946).

For local government purposes, Haselour was extra-parochial until 1858, when it became a civil parish within Lichfield Poor Law Union. In 1894, it became part of Lichfield Rural District; in 1934 the civil parish was incorporated into Harlaston.

Haselour Hall is Grade II* listed building, built in the 16th century and heavily restored by Augustus de Trafford in 1885. It is a half-timbered, five-gabled, Tudor residence that retains many of its original features, including an oak panelled reception hall and dining room, a Norman oak front door, and stained-glass leaded windows.

The front provides a sumptuous display of decorative timber framing including close-studding, quadrant braces, quatrefoils and diagonal braces in herringbone patterns. Pevsner suggests the middle or third gable, which is smaller, may have been a porch originally.

The reception hall has a large open hearth with a pillared oak staircase and leads to a drawing room and a grand panelled dining room. The dining room has an oak fire surround with intricate, hand-carved depictions of the Battle of Hastings.

The main house has 12 bedrooms, including a grand master bedroom with east-facing bay windows and a carved four-poster bed. The annexe has a further three bedrooms. There is a detached annexe, a chapel dating from the 12th century, a barn, four stables, 11 garages, a summer house and an outdoor pool, all on 10 acres of land.

The grounds are approached through a gated entrance and a tree lined driveway, which opens out into an open lawn area. They contain secluded patio areas, mature woodland and a paddock.

The 19th century additions link the house to the chapel. The chapel is even older than Haselour Hall, and Pevsner describes it as ‘a real medieval building.’ He says the turret with spire looks 13th century, but assumes the chapel was bult ca 1370.

The chapel, with its early Gothic interior, includes memorial windows commissioned by the de Trafford family. It is still in use and open to the public annually for Remembrance Day services. Near the chapel are the remains of the ancient family burying place, and the skeletons of five 14th century Black Death victims have been unearthed by the chapel. 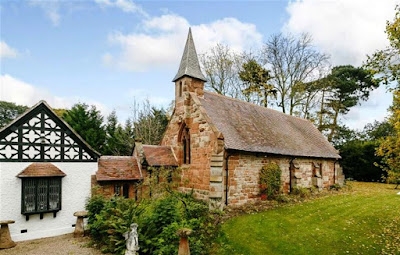 Haselour Hall was once described on one site as the most expensive property in B79, the post code in south-east Staffordshire, east of Lichfield, covers most of Tamworth, including the Moat House on Lichfield Street, and also includes Comberford, Wigginton, Elford, Harlaston, Edingale, Thorpe Constantine, Seckington and Shuttington.

The house is being sold by the Taroni family, described in one tabloid newspaper as ‘Birmingham’s undisputed scrap-metal kings.’ He fought a long battle with HS2 bosses over the purchase of his scrapyard.

The house has been home to Russell Taroni and his family for over 20 year. Russell Taroni has told the Tamworth Herald: ‘The men love it, the women don’t. They take a look around and think it’ll be hard work. It’s a fabulous building. I’m quite happy where I am, but my wife would move tomorrow.’

The couple’s two sons no longer live at Haselour Hall, but it is also home to his sister-in-law and mother-in-law.

He originally put it on the market in January 2017 for £4 million to raise funds for new business premises following the enforced HS2 move. ‘There was a house at the back of mine that I was looking to move to,’ he added, ‘but it’s gone now.’

Haselour Hall is on the market again since June 2019, through Aston Knowles, estate agents in Sutton Coldfield, who are inviting offers above £2,995,000.

Sophie Bullock, director of Aston Knowles, says: ‘The original features are so unique, and the history is incredibly rich and interesting. Those who have an entrepreneurial mind, and subject to the relevant permissions, could see the stunning hall as an opportunity to create a fabulous ‘live-in’ wedding venue. There’s certainly enough space for it.’ Ms Bullock adds that ‘the hall is exquisitely grand and has been extremely well-maintained by the current owners.’ 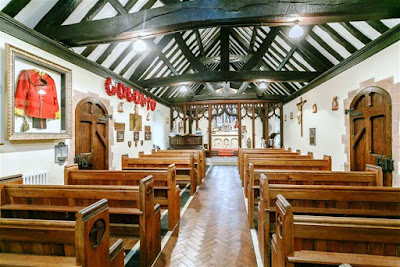