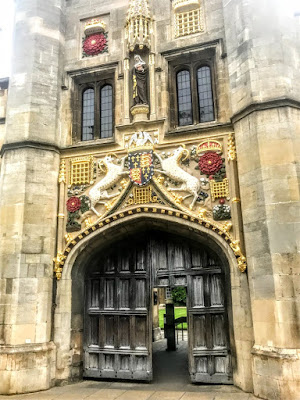 The gatehouse at Christ’s College, Cambridge, has been restored and repainted in a project that took four years to complete (Photograph: Patrick Comerford, 2019)

Strolling through Cambridge before and after this week’s USPG conference in High Leigh, it was a delight to see how one of the majestic college gates in Cambridge has been restored recently.

The restoration work at Christ’s College has taken four years to complete.

This Gatehouse on St Andrew’s Street is the main entrance to Christ’s College and is highly visible to tourists and shoppers in Cambridge. But the heraldic detail, dating from the early 1500s, had not been painted for many years and had become dull faded. The four-year project included research into the original colours and methods used, repairs, and the painting itself. 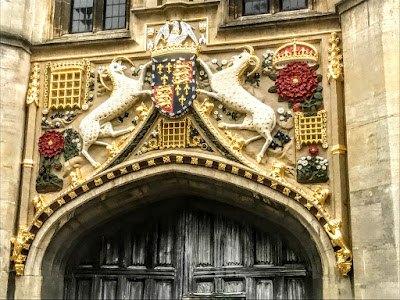 Christ’s College was originally established in 1437 by William Byngham, who called his new college God’s House. The college moved to its present location in 1448 after Henry VI decided that he needed the original site for his new King's College.

In 1505, God’s House was re-dedicated as Christ’s College under the patronage of Lady Margaret Beaufort. She was the only daughter of John Beaufort, Duke of Somerset, and was married four times. With her marriage to Edmund Tudor, the mother of Henry VII, she became a key figure in the Wars of the Roses as the matriarch of the House of Tudor.

Lady Margaret is revered as the founder of not one but two Cambridge colleges, refounding Christ’s College in 1505, and before she died in 1509 beginning the development of Saint John’s College, which was completed posthumously by her executors in 1511. Lady Margaret Hall, the first Oxford college to admit women, is also named in her honour.

The chapel survived the Reformation and now stands as a spiritual presence at the front of Christ’s College, tucked away beside the Master’s Lodge. Much of the original chapel fabric is still visible and its original construction is almost entirely intact. 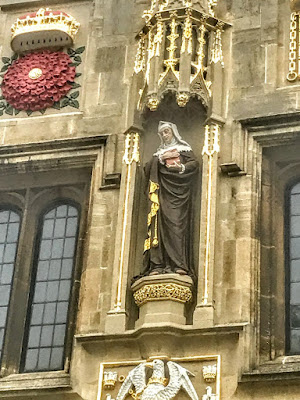 Lady Margaret’s contribution to re-founding Christ’s College is celebrated in a number of statues, heraldic emblems, and other architectural features around the college buildings. The college is entered through the imposing 16th century gatehouse, which still boasts its original oak doors. Above the entry is a statue and the coat of arms of Lady Margaret Beaufort.

Much of the façade, including the late 16th century oak doors, remained largely unchanged until the masonry was refaced with harder stone in 1714. A statue of Lady Margaret was added in the 19th century.

Christ’s College is laid out in a series of four courts. First Court is the oldest part of the college, dating to the 15th century. The range between the Gatehouse and the Chapel formed part of the original God’s House and were built between 1448 and 1452. The buildings in First Court do not look their age as they were refaced with stone in the 18th century.

The Dining Hall is an early 16th century building. Although it was remodelled in the late Victorian period, the hall retains its original roof and a 16th century portrait of Lady Margaret Beaufort.

Second Court gives access to the Fellows’ Garden, arguably the finest such garden in a Cambridge college. The site has been owned by the college since 1554, but the present garden dates from 1825.

Milton’s Mulberry Tree was planted in the garden in 1608 – the year Milton was born – as part of an attempt to encourage the silk industry in England. Legend says Milton composed Lycidas under the tree. A bathing pool and summerhouse nearby have stood there since at least 1763.

The notable alumni of Christ’s College include the Poet John Milton and the naturalist Charles Darwin.

I preached in the Chapel of Christ’s College, Cambridge, ten years ago [1 February 2009] at the Solemn Orchestral Mass for the Eve of Candlemas. The sermon was part of the Lent Term series, ‘The ears of the heart …,’ organised by the then chaplain, the Revd Christopher Woods.

I stayed in Christ’s College again in 2010 for a weekend before moving to rooms in Sidney Sussex College, where I was taking part in a summer school organised by the Institute for Orthodox Christian Studies.

Recently, people at Christ’s College realised that it had been many years since the gatehouse had been repainted and redecorated. It took about four years to research the right colours to be used, to restore wear and tear to the stonework and then to complete the repainting itself, which was undertaken by skilled craftsmen and women.

The restoration was carried out by Brown and Ralph, based in Longstanton. The firm believes the conservation of the stonework is going to increase its natural life, but also brighten the Cambridge streetscape.

There is a similar gatehouse at Saint John’s College, Cambridge. Anyone interested in architecture, Tudor history and heraldry can catch an alternative glimpse of what the gatehouse at Christ’s College might look like should visit Saint John’s. 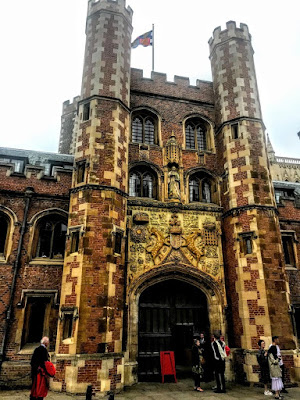