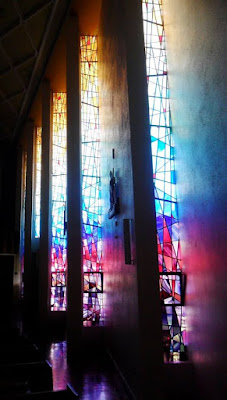 Stained glass windows and Stations of the Cross in the Franciscan chapel at Gormanston College, Co Meath (Photograph: Patrick Comerford)

This week I am offering photographs from seven churches that have connections with my education. My photographs this morning (8 March 2021) are from the Franciscan College, Gormanston, Co Meath, where I completed my secondary education. The design of the school chapel strongly reflects the influences of Coventry Cathedral, which had been designed by Basil Spence in 1951, and which would later influence my own spiritual development in the 1970s.

Those Frannciscans not only influenced my education, but shaped my later cultural interests and helped to form my future spiritual values, and after more than half a century I am still in touch with many who were in my school year.

24 And he said, ‘Truly I tell you, no prophet is accepted in the prophet’s home town. 25 But the truth is, there were many widows in Israel in the time of Elijah, when the heaven was shut up for three years and six months, and there was a severe famine over all the land; 26 yet Elijah was sent to none of them except to a widow at Zarephath in Sidon. 27 There were also many lepers in Israel in the time of the prophet Elisha, and none of them was cleansed except Naaman the Syrian.’ 28 When they heard this, all in the synagogue were filled with rage. 29 They got up, drove him out of the town, and led him to the brow of the hill on which their town was built, so that they might hurl him off the cliff. 30 But he passed through the midst of them and went on his way.

Let us give thanks again for all USPG’s partner programmes dedicated to justice and safety for women, such as the Delhi Brotherhood helpline in India, and the Anglican Church of Zambia’s Gender Justice Programme. 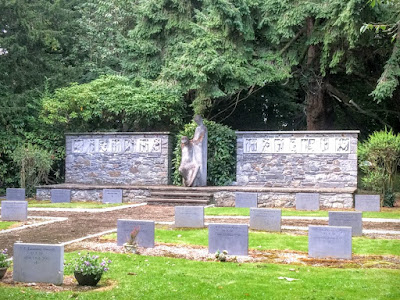 Stations of the Cross in the graveyard at Gormanston (Photograph: Patrick Comerford)