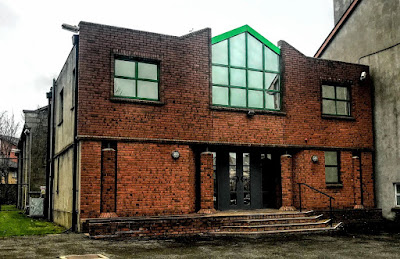 This week, I am offering photographs of synagogues that have welcomed me over the years and offered a place of prayer and reflection. My photographs this morning (19 April 2021) are from the Dublin Jewish Progressive Synagogue, or Knesset Orach Chayim, at 7 Leicester Avenue, Rathgar, dating from 1946.

The proposal for a Liberal or Progressive Jewish congregation was first put forward by Lawrence Eleazar (Larry) Elyan (1902-1992), a civil servant from Cork. The first members included Dr Bethel Solomons (1885-1965), Master of the Rotunda Hospital and a former Irish rugby international (1908-1910), who was the congregation’s first president; Professor Mervyn Abrahamson of the Royal College of Surgeons; Abraham Jacob (Con) Leventhal (1896-1979), Lecturer in French at TCD and a friend of Samuel Beckett; and Dr Ernst Schreyer, a prominent lawyer in Germany before World War II, who taught German at TCD.

The congregation first met held in a Quaker meeting house until 1952, when the foundation stone of the new synagogue in Leicester Avenue was consecrated. The synagogue is beside the Church of the Three Patrons in Rathgar.

The first cantor was the Revd D Friedmann, from about 1946 to about 1948, and the minister from 1948 to 1951 was Rabbi Dr Jakob Jankel Kokotek. Rabbi Kokotek was born in Bedzin, Poland, in 1911, and was brought up in Germany. After arriving in England as a refugee, he served as rabbi and minister of the Liberal Jewish Synagogue, St John’s Wood (1941-1945) and Southgate and Enfield Progressive Synagogue, now Southgate Progressive Synagogue (1946-1948), before coming to Dublin in 1948.

Since its foundation, the congregation has been based on values of inclusivity and the practice of Liberal Judaism. Membership is open to all Jews, and the participation of non-Jewish spouses or partners in the life of the congregation is welcomed. DJPC celebrated its 70th anniversary in May 2016.

This is one of the synagogues I frequently visited with students when I was teaching the module on Liturgy on the MTh course at the Church of Ireland Theological Institute. Earlier, as a young teenager, I passed this synagogue regularly, visiting an uncle who lived around the corner, and in my late teens visited here for Kol Nidre night.

The synagogue is a constituent community of Liberal Judaism, formerly known as the Union of Liberal and Progressive Synagogues (ULPS). I continue to use the ULPS frequently in my personal, daily prayers. The congregation has its own cemetery in Woodtown, near Rathfarnham, established in 1952. 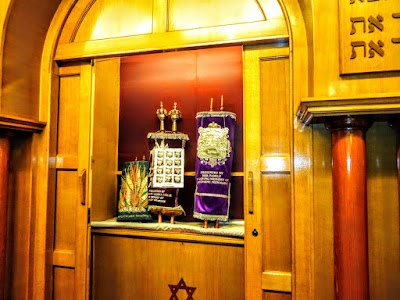 22 The next day the crowd that had stayed on the other side of the lake saw that there had been only one boat there. They also saw that Jesus had not got into the boat with his disciples, but that his disciples had gone away alone. 23 Then some boats from Tiberias came near the place where they had eaten the bread after the Lord had given thanks. 24 So when the crowd saw that neither Jesus nor his disciples were there, they themselves got into the boats and went to Capernaum looking for Jesus.

25 When they found him on the other side of the lake, they said to him, ‘Rabbi, when did you come here?’ 26 Jesus answered them, ‘Very truly, I tell you, you are looking for me, not because you saw signs, but because you ate your fill of the loaves. 27 Do not work for the food that perishes, but for the food that endures for eternal life, which the Son of Man will give you. For it is on him that God the Father has set his seal.’ 28 Then they said to him, ‘What must we do to perform the works of God?’ 29 Jesus answered them, ‘This is the work of God, that you believe in him whom he has sent.’

The Prayer in the USPG Prayer Diary today (19 April 2021) invites us to pray:

Let us pray for those who have been displaced by the effects of climate change. May we welcome them with open arms whilst recognising the impact of our actions on the world.