How Baltimore recovered
after being sacked by
the Pirates of Algiers 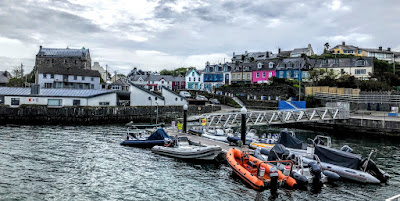 During last week’s road trip or ‘staycation’ in Co Kerry and West Cork, the village of Baltimore was the starting and return point for a visit to Cape Clear Island, at the very southern tip of Ireland.

Baltimore is where the Wild Atlantic Way meets Carbery's Hundred Isles and the beautiful coast of West Cork. It is the main ferry port for Cape Clear Island, Sherkin Island, and the east side of Roaring Water Bay and Carbery’s Hundred Isles.

Baltimore was once the haunt of pirates, but today is a centre for all kinds of waterborne activity. This is a village of about 400 residents, but those numbers swell in the summer months with the arrival of visitors. It is about 100 km west of Cork city and the final stop on the 2,500 km length of the Wild Atlantic Way.

Baltimore’s large natural harbour is formed partly by the islands in the archipelago known as Carbery’s Hundred Isles. Around the pier, charter boats and pleasure craft jostle with fishing vessels and ferries to the islands. 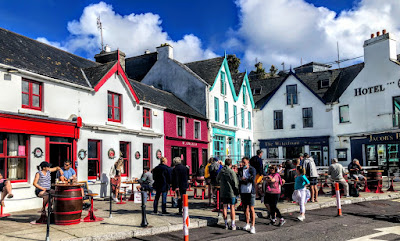 The village ‘Square’ – which is more of a triangle – is at the heart of Baltimore (Photograph: Patrick Comerford, 2021)

The oldest part of the village with its castle and rows of fishermen’s cottages is spread along the east shore of the harbour. At the heart of Baltimore is the village ‘Square’ – more of a triangle – around which are clustered bars and restaurants looking west over the sea and islands.

Baltimore (Dún na Séad, the ‘Fort of the Jewels’) was a seat of one of Ireland’s most ancient dynasties, the Corcu Loígde, ancestors of the O’Driscoll, O’Leary and Hennessy families, and the O’Driscoll castle, Dún na Séad, gave its name to the Irish language name of the town.

The castle was built in 1215 by the Anglo-Norman Sleynie, but later became the principal castle of the O’Driscoll clan.

The name Baltimore is an anglicisation of the Irish Baile an Tí Mhóir, ‘town of the big house’. 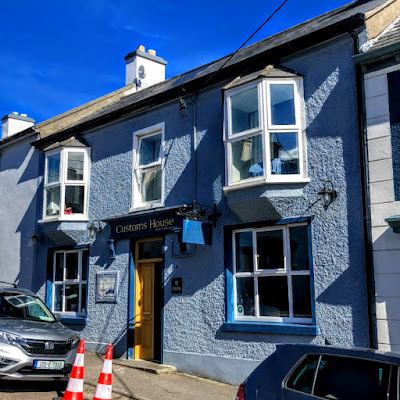 The Customs House … the name is a reminder of Baltimore’s trading past (Photograph: Patrick Comerford, 2021)

In the early 1600s, Baltimore had a thriving pilchard industry and wine trade, but was also regarded as a lucrative pirate base and was known in Venice as ‘a nest of pirates.’ English piracy, however, declined, partly due to competition from Barbary pirates.

In the early 17th century, the head of the O’Driscoll clan, Sir Fineen O’Driscoll, an ally of the Crown, leased his lands to Sir Thomas Crooke (1574-1630), who received a Charter from James I for a colony founded ca 1605. Baltimore became a market town in 1607, with a weekly market and two annual fairs.

Baltimore became a borough in 1612 with a town government consisting of a sovereign or mayor, Sir Thomas Crooke, and 12 burgesses, and it sent two MPs to the Irish House of Commons from 1613 to 1801. 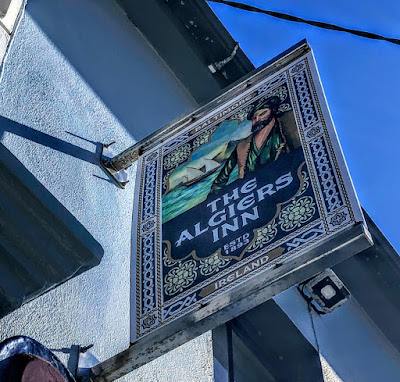 The Algiers Inn … Baltimore was sacked by Barbary pirates in 1630 (Photograph: Patrick Comerford, 2021)

When Crooke died in 1630, his claims in Baltimore were contested by Sir Walter Coppinger. But, a year, later, the town was depopulated in 1631 in the Sack of Baltimore, a raid by Barbary pirates from either Ottoman Algeria or Salé in Morocco. Between 100 and 237 people, English settlers and Irish local people, were sold into slavery, of whom only two or three ever saw Ireland again.

On board two ships that left Algiers was a combined force of Dutch, Algerians and Turks, under the command of one of the most successful leaders of Barbary pirates, a renegade Dutch captain, Jan Janszoon van Haarlem, known as Murad Reis the Younger.

By the time they reached the coast of West Cork, they had already seized a number of smaller vessels, imprisoning their crews. The captain of one was a Dungarvan man, John Hackett. Reis’s original target was probably Kinsale, but Hackett declared the harbour there ‘too hot’ to enter and in return for his freedom he offered to pilot Reis to the defenceless village of Baltimore.

Undetected, the pirates anchored outside the harbour of Baltimore, ‘about a musket shot from the shore’ late in the evening of 19/20 June. From there, they launched an attack on the sleeping village before dawn the next day.

The people of Baltimore were taken by surprise. More than 200 armed corsairs landed in the cove, torching the thatched roofs of the houses and carrying off ‘young and old out of their beds.’

Moving on to the main village, the pirates took more captives before musket fire and the beating of a drum alerted the remaining villagers and persuaded Reis to end the raid.

By then, more than 100 men, women and children had been taken. They were herded back to ships that bore them away from West Cork to the slave markets of North Africa. 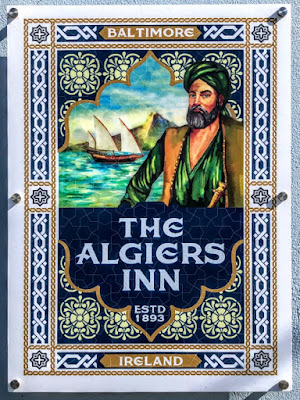 The raid on Baltimore was the worst-ever attack by Barbary corsairs on the mainland of Ireland or Britain. Most of the names in the official report sound English, but it is likely that there were also a few native Irish among the prisoners.

Very few of these people were ever heard of again. At most, three returned to Ireland: one was ransomed almost at once, and two others in 1646.

However, the fate of the rest is unknown. Many may have ended their days as galley slaves or concubines in the harems of Algiers. For his part, Hackett was arrested and hanged on a clifftop above Baltimore.

The Sack of Baltimore has given rise to many conspiracy theories. They generally point the finger at the rapacious Sir Walter Coppinger, who had been seeking to prise the village away from the O’Driscolls, oust the Crooke family and the settlers and secure it for himself. Whether by accident or design, the pirates carried out part of this plan for him.

Suspicion also points to O’Driscoll’s exiled relatives, who had fled to Spain after the Battle of Kinsale and had no hope of inheriting Baltimore by legal means.

On the other hand, Murad may have planned the raid without any help. The authorities had advance intelligence of a planned raid on the Cork coast, but Kinsale was thought to be a more likely target than Baltimore. 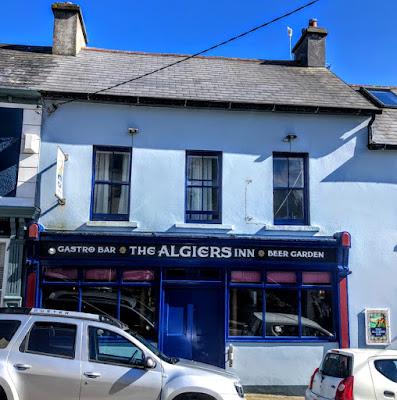 The Sack of Baltimore had an impact on the village for over 200 years (Photograph: Patrick Comerford, 2021)

In the aftermath of the raid, the surviving villagers moved inland to Skibbereen and other places in search of greater security and Coppinger’s designs on the village were realised. The sack marked the end of the 400-year reign of the O’Driscolls as overlords of Baltimore, and Baltimore was almost deserted for generations.

A slow recovery began in the 18th century, and by the early 1800s the village was starting to prosper again, only to suffer further great losses in the Great Famine.

Reminders of the Sack of Baltimore still exist in the form of pub names, like the ‘Algiers Inn.’ It inspired Thomas Davis to write his poem, ‘The Sack of Baltimore.’ A detailed account of the disaster is told by Des Ekin in his book The Stolen Village: Baltimore and the Barbary Pirates. 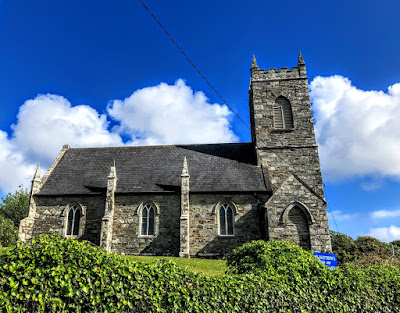 Two years ago, in 2019, parishioners celebrated the 200th anniversary of the consecration of Saint Matthew’s Church, the Church of Ireland parish church in Baltimore.

Saint Matthew’s Church was built in 1819 on a site donated by Lord Carbery, with a loan of £600 from Board of Frist Fruits. The church was designed by the Limerick-based architect James Pain and built with sandstone quarried on Cape Clear Island. Saint Matthew’s was consecrated by Thomas St Lawrence, Bishop of Cork and Ross, on 25 September 1819.

Oak panelling, oak fonts and ends to choir seats, mosaic tiling, a marble step to in the sanctuary, and a pavement in the choir aisle were installed in the church in 1918. They were designed by the Cork-born architect Robert Walker (1866-1937) as a gift from Annie Becher in memory of her husband, William Start Becher, who died of war wounds in France in July 1916.

Saint Matthew’s Church stands on a prominent location in Baltimore and is an important focal point in the village. The tower, a classic component of the Board of First Fruit style churches, is a striking feature adding to the architectural diversity of the village.

In the Roman Catholic Diocese of Ross, Baltimore is the main village in the parish of Rathmore and the Islands, the southernmost parish in Ireland, which includes Cape Clear Island.

Baltimore’s castle, Dún na Sead, overlooks the town but was ruined by the mid-17th century. It was restored in 1997-2005, is open to the public and is home to a ‘Pirate Exhibition.’ 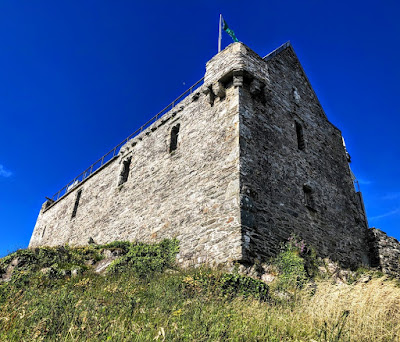 Despite local claims and persistent lore, the city of Baltimore in Maryland takes its name not from this Baltimore in West Cork but from Baltimore Manor in Drumlish, Co Longford, the ancestral home of the Calvert family who held the title of Lord Baltimore.

Yet, it is a curious coincidence that Frederick Calvert (1731-1771), 6th and last Baron Baltimore, who inherited near feudal rights in the colony of Maryland, was ‘living at Constantinople like a Turk, with his seraglio all around him’ in 1764, according to James Boswell.

Lord Baltimore was said to have ‘lost all physical and moral taste’ and later rebuilt his London home in the style of a Turkish harem. 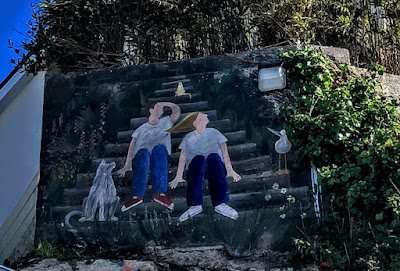 Street art at the top of steps in Baltimore (Photograph: Patrick Comerford, 2021)