Praying in Ordinary Time 2021:
24, the churches of Torcello 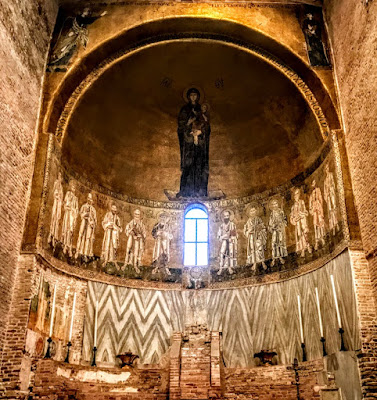 The mosaics in the main east apse in the Basilica in Torcello are among the finest Byzantine mosaics (Photograph: Patrick Comerford)

My photographs this week are from churches in Venice. This morning (22 June 2021), my photographs are from the Basilica of Santa Maria Assunta on Torcello and the Church of Santa Fosca. 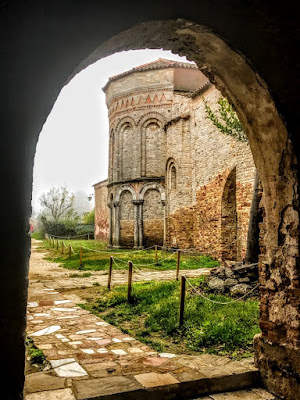 The Church of Santa Fosca seen through the arches and the colonnades of the Basilica of Santa Maria Assunta (Photograph: Patrick Comerford)

Torcello is just five minutes from Burano and the most northerly island in the Lagoon of Venice. This is the island to which Venice traces its cultural and ecclesiastical roots, and the seventh century cathedral is the oldest building in the Lagoon.

The first people settled on Torcello in the fifth or sixth century, and over time it grew into a thriving colony with a cathedral, churches, palaces, and a population that peaked at 20,000 people.

Today, just a few dozen people at most live on the clustered islands that make up Torcello, and they depend mainly on tourism for their livelihood. But this is an attractive island, with its sites, restaurants, cafés, vineyards, and tiny bridges crossing from one islet to the next.

Torcello was once the largest and most important settlement in the Venetian Lagoon. It was first settled in the year 452 and is the parent island from which Venice was populated. It was a town with a cathedral and bishops long before Saint Mark’s Basilica was built.

After the downfall of the Western Roman Empire, Torcello was one of the first islands in the lagoon to be populated by people who fled the mainland to seek shelter from wave after wave of barbarian invasions, especially after Attila the Hun destroyed the city of Altino and the surrounding settlements in 452.

Although the Veneto region belonged to the Byzantine Exarchate of Ravenna from the end of the Gothic War, it remained unsafe because of frequent Germanic invasions and wars. During the following 200 years, the Lombards and the Franks drove urban refugees to the relative safety of Torcello, including the Bishop of Altino.

Torcello became the bishop’s official seat in 638, and it remained so for more than 1,000 years. The people of Altino brought with them the relics of Saint Heliodorus, now the patron of the island and now kept in a Roman sarcophagus below the High Altar.

Torcello had close cultural, political and economic ties with Constantinople. However, it was a distant outpost and established de facto autonomy from the Eastern Empire.

Torcello grew rapidly as a political and trading centre, and for centuries was a more powerful trading centre than Venice. In the 10th century, it had a population of up to 20,000. Salt became Torcello’s economic backbone and it was an important post in east-west trade, controlled largely by Byzantium.

Another crisis for Torcello developed when that the swamp area of the lagoon around the island increased from the 14th century, partly because of the lowering of the land level. Silt from rivers on the mainland filled up the shallow waters around Torcello, navigation in the laguna morta (dead lagoon) was impossible before long and traders ceased calling at the island. The growing swamps also seriously aggravated malaria.

Many people left Torcello for Murano, Burano and Venice, the bishopric was transferred to Murano in 1689, and by 1797 the population of Torcello had dropped to about 300. Many of Torcello’s numerous palazzi, its 12 parish churches and its 16 cloisters were purloined for building material by the Venetians and almost all have disappeared.

The only remaining mediaeval structures are one small palazzo, the cathedral, its bell-tower, the adjacent church, the town’s former council chamber and archives. 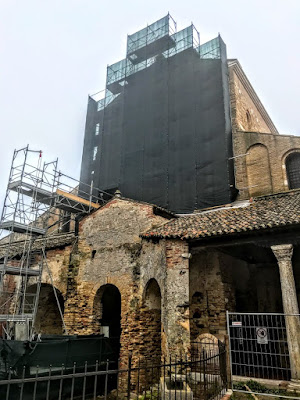 The magnificent Byzantine-Italian cathedral, the Basilica of Santa Maria Assunta, dates back to 639 AD and rises above the island, with the Bell Tower and Church of Santa Fosca alongside.

The Cathedral of Santa Maria Assunta was founded in 639, but underwent radical rebuilding in 1008. The present basilica is of basilica-form with side aisles but no crossing. It includes many earlier features, and has much 11th and 12th century Byzantine work.

One of the most moving mosaics in Venice is the 13th century mosaic in the central apse of the Virgin Hodegetria or the Virgin Mary in a blue robe with gold fringing, cradling the Christ Child, with the 12 Apostles at their feet.

A highly decorative and vivid Domesday mosaic depicting the Last Judgment covers the entire west wall, although when I visited it was being restored and was hidden from view by scaffolding.

The mosaic in the right apse depicts Christ Pantocrator enthroned between two archangels, Saint Michael and Saint Gabriel, with the Lamb of God in a medallion of the vault.

The pulpit is made from fragments from the first, seventh century church. The Byzantine marble panels of the iconostasis or rood screen are carved with peacocks, lions and flowers. The finely carved capitals on the nave columns date from the 11th century.

The flooring of the basilica is a vivid swirl of colours in bright tesserae of stone and glass, with cubes, semicircles and triangles laid in square designs.

The Church of Santa Fosca, standing beside the basilica, dates from the 11th and 12th century. It is built in the form of a Greek cross, is surrounded by a five-sided, semi-octagonal colonnaded portico, and a Byzantine interior.

The central dome and cross sections are supported on columns of Greek marble with fine Corinthian columns.

On the left side of the square, the Museo Provinciale di Torcello is housed in two 14th century palaces, the Palazzo dell’Archivio and the Palazzo del Consiglio, built in Gothic style as the seat of government of the island.

A marble stone chair in the square is known as Attila’s Throne. Legend says it was used as a throne by the fifth century King of the Huns. It is more likely that it belonged to the Bishops of Torcello, or the podestà, a city governor, or, perhaps, the seat where chief magistrates were inaugurated. 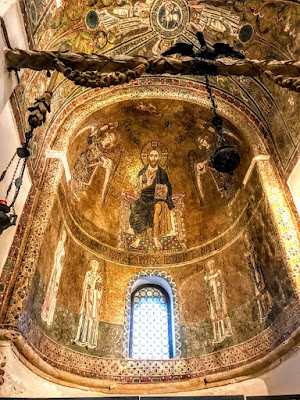 [Jesus said:] 6 ‘Do not give what is holy to dogs; and do not throw your pearls before swine, or they will trample them under foot and turn and maul you.

12 ‘In everything do to others as you would have them do to you; for this is the law and the prophets. 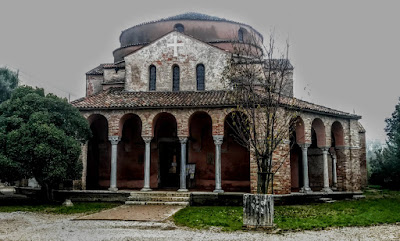 The Church of Santa Fosca dates from the 11th and 12th century (Photograph: Patrick Comerford)

Let us give thanks for the life of Saint Alban, and for the contributions of immigrants to our society. May we recognise their works and offer hospitality to all who migrate to the UK today. 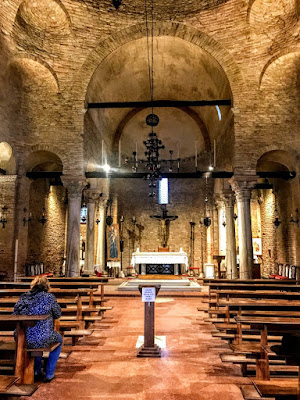 Inside the Church of Santa Fosca (Photograph: Patrick Comerford) 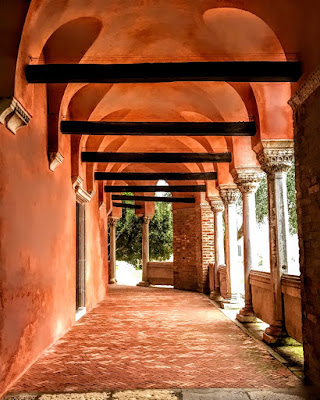 In the semi-octagonal portico of the Church of Santa Fosca (Photograph: Patrick Comerford)