Indiana Jones, the story of
a stolen Russian icon and
an icon in a church in Venice 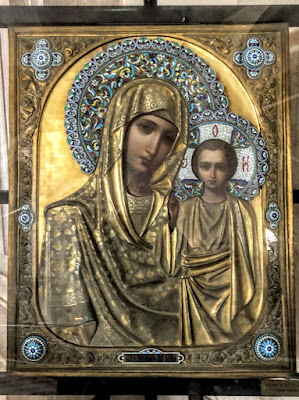 The Icon of the Madonna of Kazan in the Church of San Martino on the island of Burano … but what happened to the original icon? (Photograph: Patrick Comerford, 2021)

I was writing in my prayer diary this morning of the Church of San Martino or Saint Martin on the island of Burano in the Venetian lagoon and its icon of Madonna of Kazan with the Christ Child. But is this the original, famous Russian icon, or is it a copy?

The icon of Our Lady of Kazan, also called the Mother-of-God of Kazan, was a holy icon of the highest standing in the Russian Orthodox Church. It depicted the Virgin Mary with the Christ Child, and in this icon she was venerated as the protector and patroness of the city of Kazan, and the Holy Protector of Russia. The feast days of Our Lady of Kazan are 21 July, and 4 November, also the Russian Day of National Unity.

The icon has many copies, and is venerated throughout all Orthodox Churches. But the story of the original icon is one of intrigue, war, theft, forgery and ecumenism, and even involves an English adventurer and fantasist who is said to have inspired the fictional character of Indian Jones.

Two major Russian cathedrals, the Kazan Cathedral, Moscow, and the Kazan Cathedral, St Petersburg, are consecrated to the Virgin of Kazan, and they display copies of the icon, as do many churches throughout Russia. The original icon in Kazan was stolen, and probably destroyed, in 1904.

According to legend, the original icon of the Virgin of Kazan was brought to Russia from Constantinople in the 13th century. After the establishment of the Khanate of Kazan in 1438, the icon disappeared from the historical record for more than a century, but was miraculously recovered in a pristine state over 140 years later in 1579.

The chronicle of Metropolitan Hermogenes, later Patriarch of Moscow and All Russia, was written at the request of Tsar Feodor in 1595. He describes the recovery of the icon. According to this account, after a fire destroyed Kazan in 1579, the Virgin Mary appeared to a 10-year-old girl, Matrona, revealing the place where the icon was hidden.

The girl told the archbishop about the dream, but she was not taken seriously. However, on 8 July 1579, after two repetitions of the dream, the girl and her mother recovered the icon themselves, buried under a destroyed house where it had been hidden to save it from the Tatars.

Other churches were built in honour of the newly-found icon of the Virgin of Kazan, and copies of the icon were displayed at the Kazan Cathedral in Moscow, built in the early 17th century, at Yaroslavl and in St Petersburg.

A number of Russian military commanders, including Prince Dmitry Pozharsky and Field Marshall Mikhail Illarionovich Kutuzov, believed their invocation of the Virgin Mary through the icon had aided Russia in repelling a Polish invasion in 1612, a Swedish invasion in 1709, and Napoleon’s invasion of Russia in 1812. The Kazan icon became immensely popular, and there were nine or ten separate miracle-attributed copies of the icon around Russia.

On the night of 29 June 1904, the icon was stolen from the Kazan Convent of the Theotokos in Kazan where it had been kept for centuries. The thieves wanted the icon’s gold frame, with its many valuable jewels. Several years later, Russian police apprehended the thieves and recovered the frame.

The thieves originally declared that the icon itself had been cut to pieces and burnt, although one thief later confessed that it was sold to the Russian Old Believers and was kept in a monastery in the wilds of Siberia. However, the Russian police believed this was a fake, and they refused to investigate, claiming it would be unlucky to venerate a fake icon as though it were authentic.

After the Russian Revolution of 1917, there was speculation that the original icon was preserved in St Petersburg. One story says that during World War II an icon of Our Lady of Kazan was used in processions around the fortifications of Leningrad during the Siege of Leningrad (1941-1944). Meanwhile, the Communist authorities ordered the demolition of the Kazan Convent of the Theotokos in Kazan.

There is speculation that that the Bolsheviks sold the icon abroad. But the Russian Orthodox Church did not accept these theories, and the history of the stolen icon between 1917 and 1953 is unknown.

The flamboyant English travel writer and adventurer Mike Hedges (1882-1953), also known as Frederick Mitchell-Hedges, bought an icon from Arthur Hillman in 1953 and claimed it was the original Kazan icon. However, Hedges was a fantasist, who also claimed to have discovered the ‘Crystal Skull’ in Belize, and his tall tales are said to have inspired the character of Indiana Jones.

Many experts dispute Hedges’s claim that his icon was the original Kazan icon. However, the art historian Cyril GE Bunt, who wrote extensively on Byzantine and Russian art, concluded ‘that it is the work of a great icon painter of the 16th century […] the pigments and the wood of the panel are perfectly preserved as exhaustive X-ray tests have proved, and have mellowed with age.’

Bunt suggested that although it was a copy of the original icon, this was the icon carried into battle by Dmitry Pozharski in 1612. However, a joint Russian-Vatican commission later determined it was a later 17th century copy.

Pope John Paul II placed the icon in his study, where he venerated it for eleven years. He wished to visit Moscow or Kazan to return the icon to the Russian Orthodox Church. But the Moscow Patriarchate was suspicious that the Pope might have other motives, and so instead, in an ecumenical gesture, Cardinal Walter Kasper presented the icon to the Russian Church unconditionally in August 2004.

On the next feast day of the holy icon, 21 July 2005, Patriarch Alexius II and Mintimer Shaymiev, the president of Tatarstan, received it in the Annunciation Cathedral of the Kazan Kremlin. This copy is sometimes nicknamed Vatikanskaya.

The icon is now enshrined in the Cathedral of the Elevation of the Holy Cross, part of the Convent of the Theotokos. This convent, which was re-established as a monastery in 2005, stands on the site where the original icon of Our Lady of Kazan was found, and there are plans to convert the monastery’s other buildings into an international pilgrimage centre.