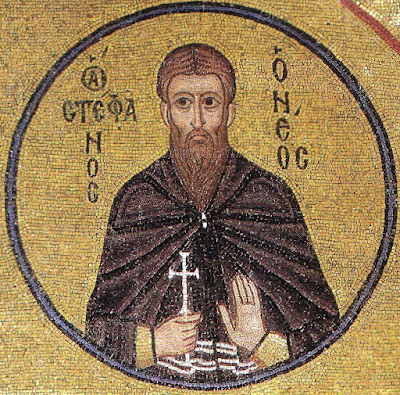 Each morning in the time in Advent, I am reflecting in these ways:

I was writing on this blog yesterday about the Icon of the Madonna of Kazan. So my choice of a saint this morning is Saint Stephen the Younger, who was martyred in Constantinople in the year 764 because of his vocal opposition to the iconoclast heresies promoted by the Emperor Constantine V.

Saint Stephen was born in Constantinople ca 713 -714. His father Gregory was a craftsman, and his mother was Anna. On Holy Saturday 716, he was baptised in the Hagia Sophia by Patriarch Germanus I. At 15 or 16, he became a monk on Mount Auxentius in Bithynia.

Some years later, he returned to Constantinople for his father’s funeral, and then brought his mother and sisters to the convent of Mount Auxentius.

In his early 40s, he retired to a cave as a hermit. He refused to accept the decisions of the iconoclast Council of Hieria in 754, but did not begin to suffer persecutions until ca 760.

The Emperor Constantine V ordered his arrest and soldiers brought him to a monastery in Chrysopolis. There again he refused to accept the decisions of Hieria and was banished to the island of Prokonnesos. From this exile, he was brought to the Phiale prison in Constantinople ca 764, where he was questioned by the emperor himself.

After almost a year in prison, he was condemned to death by Constantine, and dragged by soldiers through the streets and was clubbed to death. His body was then dragged through the streets, although his skull was rescued by one of his followers and brought to the Dius Monastery.

His relics are recorded in churches and monasteries in Constantinople in the 13th to 15th centuries. Today, his skull is said to be in Saint Panteleimon monastery on Mount Athos.

[Jesus said:] 25 ‘There will be signs in the sun, the moon, and the stars, and on the earth distress among nations confused by the roaring of the sea and the waves. 26 People will faint from fear and foreboding of what is coming upon the world, for the powers of the heavens will be shaken. 27 Then they will see “the Son of Man coming in a cloud” with power and great glory. 28 Now when these things begin to take place, stand up and raise your heads, because your redemption is drawing near.’

The Prayer in the USPG Prayer Diary today (28 November 2021, First Sunday of Advent) invites us to pray:

Christ Jesus,
In great humility,
You were born in human likeness.
Help us to humble ourselves
So that we may put others first. 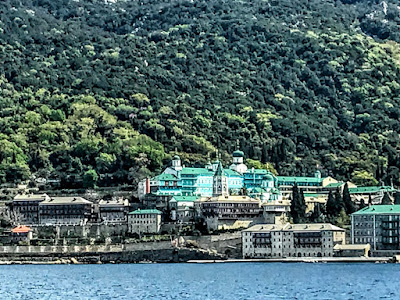