Anti-Semitism or antisemitism?
What a difference a hyphen makes 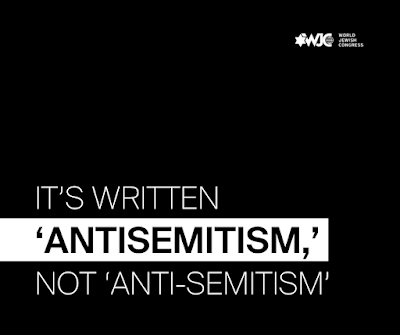 It is always important to do some regular maintenance and updating on any website or blog. Over the last few days, for example, I have slowly started changing tags on some of my postings, eliminating the tags ‘Anti-Semitism’ and replacing them, wherever I find them with the tag ‘Antisemitism.’

In time, I hope to change the words wherever I find them in the actual texts or wording of earlier blog postings – although this may take a little more time.

Why go to so much bother over one hyphen? After all, I noticed in a major comment-feature yesterday (16 December 2021), The Irish Times insisted on using the old house style of ‘Anti-Semitism.’ But many publications, including the New York Times and the AP, are now using the unhyphenated spelling of ‘antisemitism.’

The truth is that language shapes our reality. Jewish organisations have long argued that the previous spelling, ‘anti-Semitism,’ distorts the true meaning of the term.

The change at the New York Times and other publications removes the hyphen and lowercases the first S. The New York Times made no public announcement of the switch, which was formally adopted in August, according to Phil Corbett, the associate managing editor. While the new spelling may seem merely cosmetic, it reflects a deeper linguistic debate within the Jewish community.

The International Holocaust Remembrance Alliance began advocating in 2015 for ‘antisemitism’ over ‘anti-Semitism,’ a term invented in 1879 and popularised in the late 1800s by the right-wing German polemicist Wilhelm Marr. There is a growing concern that the hyphenated spelling allows for the possibility of something called ‘Semitism.’

That idea ‘not only legitimises a form of pseudo-scientific racial classification that was thoroughly discredited by association with Nazi ideology,’ the International Holocaust Remembrance Alliance (IHRA) says. It ‘also divides the term, stripping it from its meaning of opposition and hatred toward Jews.’

The philological term ‘Semitic’ referred to a family of languages originating in the Middle East whose descendant languages today are spoken by millions of people mostly across Western Asia and North Africa. Following this semantic logic, the conjunction of the prefix ‘anti’ with ‘Semitism’ indicates antisemitism as referring to all people who speak Semitic languages or to all those classified as ‘Semites’. The term has, however, since its inception referred to prejudice against Jews alone.

In the mid-19th century, the derived construct ‘Semite’ provided a category to classify people based on racialist pseudo-science. At the same time the neologism ‘antisemitism’, coined by the German journalist Wilhelm Marr in 1879 to designate anti-Jewish campaigns, was spread through use by anti-Jewish political movements and the general public.

The modern term gained popularity in Germany and Europe incorporating traditional Christian anti-Judaism, political, social and economic anti-Jewish manifestations that arose during the Enlightenment in Europe, and a pseudo-scientific racial theory that culminated in Nazi ideology in the 20th century.

Although the historically new word only came into common usage in the 19th century, the term antisemitism is today used to describe and analyse past and present forms of opposition or hatred towards Jews. In German, French, Spanish and many other languages, the term was never hyphenated.

The unhyphenated spelling is favoured by many scholars and institutions in order to dispel the idea that there is an entity ‘Semitism’ which ‘anti-Semitism’ opposes. Antisemitism should be read as a unified term so that the meaning of the generic term for modern Jew-hatred is clear. At a time of increased violence and rhetoric aimed towards Jews, it is urgent that there is clarity and no room for confusion or obfuscation when dealing with antisemitism.

With the publication of Antisemitism: Here and Now in 2019, Deborah Lipstadt, the Holocaust historian who was recently nominated to be the Biden administration’s special envoy to monitor and combat antisemitism, helped introduce the discussion to a wider audience.

‘It should be spelled as one word,’ she said in an interview two years ago. ‘Its inventor wanted it to mean one thing and one thing only: Jew hatred. He coined this word because he wanted his word to encompass, not just Jews who are religious, but Jews who have abandoned all links to the religion. He wanted to depict Jews as a metaphysical enemy.’

The Anti-Defamation League also favours the unhyphenated usage, arguing that the spelling is ‘the best way to refer to hatred toward Jews.’

Over the past year, other mainstream media outlets have followed suit, including BuzzFeed and The Associated Press in April. AP publishes a style guide that is widely consulted across journalism.

The decision at the New York Times follows a separate, more public decision in June 2020 when it began using an uppercase ‘Black’ to describe people and cultures of African origin.

‘We believe this style best conveys elements of shared history and identity, and reflects our goal to be respectful of all the people and communities we cover,’ said an editor’s note. ‘The new style is also consistent with our treatment of many other racial and ethnic terms,’ it added.