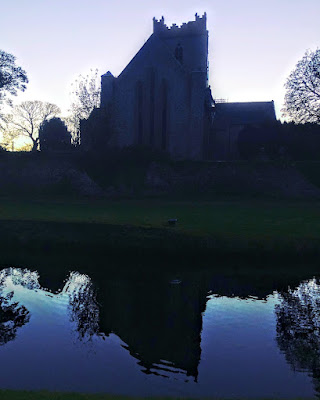 With only a week to go to Christmas today (18 December2021), this is going to be a busy day, with preparations for tomorrow morning’s Parish Eucharist in Saint Brendan’s Church, Tarbert, Co Kerry, and tomorrow afternoon’s Service of Nine Lessons and Carols in Saint Mary’s Church, Askeaton, Co Limerick. 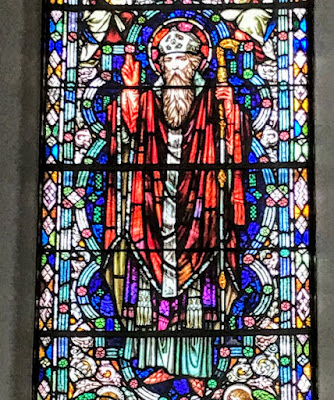 The Calendar in The Book of Common Prayer of the Church of Ireland today [18 December] commemorates Saint Flannan of Killaloe, who died in the year 640.

Saint Flannan is celebrated as both abbot and first Bishop of Killaloe, and he is said to have been a persuasive preacher and missionary. He lived in the sixth and seventh century, but little is known about his life and there are many versions of it.

Saint Flannan was the son of an Irish chieftain, Turlough, who came from the same family as the Kings of Thomond, the ancestors of Brian Boru and the O’Brien and MacMahon families. Turlough has been described as a truly Christian king, as an apostle and preacher rather than a ruler of a kingdom, openly professing and living his faith.

In his youth, Saint Flannan was placed under the care of Saint Blathmet, a Biblical scholar. Saint Blathmet was renowned as a great teacher and children of the nobility were sent from miles around to study with him. Saint Flannan then became a student of the monk, Saint Molua, at his monastery in Killaloe. The name Killaloe means “the Church of Saint Lua.”

Despite family opposition, Flannan became a monk, but his preaching was so persuasive that his own father gave up his throne in his old age, retired to Saint Carthage’s Monastery in Lismore, Co Waterford, and received g a monk’s habit from Saint Colman.

Legend says Saint Flannan worked diligently in the monastery, and he prayed the entire Psalter daily. One day, legend says, after he had been baking continuously for 36 hours, a heavenly light shone through the fingers of his left hand. It lit up the darkness to enable him to continue with his task. The Abbot, on learning of this, was so impressed that he decided to retire from his position and he appointed Flannan as Abbot in his place.

His time as Abbot of Killaloe has become legendary, being described as a period when “the fields waved with the richest crops, the sea poured almost on the shore an abundance of large whales and every kind of smaller fish, and the apple trees drooped under the weight of the fruit, woods abounded in acorns and hazelnuts, the most restless nations were at peace, and the poor of every description experienced open-handed hospitality.”

The people of Thomond decided that Flannan should become their bishop and it is said Flannan made a pilgrimage to Rome where Pope John IV consecrated him the first bishop of Killaloe in 639 before he returned to Ireland.

However, Pope John IV was elected Pope on 24 December 640 – six days after Saint Flannan is said to have died in Killaloe. While still Pope-elect, John and other bishops wrote to the clergy of Ireland and Scotland telling them they were mistaken in their calculation of the date of Easter and warning them against the heresy of Pelagianism.

It is said that on his journey back to Ireland, Flannan travelled through Tuscany and Burgundy. He preached throughout Ireland, and it is also claimed that he worked as a missionary in Scotland and in the Hebrides. There was a church of his at Inishlannaun in Lough Corrib and another on Inishbofin. However, it is not certain that Saint Flannan of Killaloe is the same person as Saint Flannan of Scotland.

During his life, it is said, Saint Flannan of Killaloe performed many miracles. The 12th century Life of Saint Flannan says he spent his life “like a skilful and careful gardener sowing the seeds of every virtue in the hearts of the faithful.”

When Saint Flannan felt his death was approaching, he gathered some of his disciples and told them of the importance of observing natural and human justice and asked them to encourage peace among the people of the provinces. He blessed his relatives before he died on 18 December 640.

After his death, his reputation for holiness spread throughout Ireland and his grave in Killaloe, Co Clare, became a place of pilgrimage.

These are the myths and the legends anyway. But there are no historical records of a Saint Flannan of Killaloe, and the 12th century biography of him is without any historical value.

It seems the stories that grew up around Saint Flannan drew on the stories associated with another Saint Flannan, who lived in the Hebrides in the seventh century and gave his name to the Flannan Islands, and incorporated some of the biographical details of Flannan of Cill Ard in West Clare, who died in 778.

Far from Flannan being the first Bishop of Killaloe in the first half of the seventh century, the Diocese of Killaloe appears to have its roots in the territorial ambitions of the descendants of Brian Boru, who made Killaloe the capital of his expanding Kingdom of Dál gCais at the end of the tenth century. Indeed, there is no mention of Killaloe in the Irish annals before that date.

The first recorded Bishop of Killaloe is Domnall Ua hÉnna I, who died in 1098, over 90 decades after Bran Boru died at the Battle of Clontarf in 1014 ... and almost 450 years after Saint Flannan is said to have died.

Killaloe was not recognised as a diocese for another 13 years at the Synod of Ráith Breassail in 1111, and the first recognised diocesan bishop was Máel Muire Ua Dúnáin. In its first form, the diocese may have been short-lived, for Máel Muire resigned shortly afterwards, and became a monk in Clonard, where he died in 1117.

A cathedral was not built at Killaloe until the reign of Domhnall Mór O Brien (1168-1194), who built the first cathedral in 1180. But all that remains of that first cathedral is a Romanesque doorway now in the south-west corner of the present nave.

One of the days of my ministry is that I have been the Canon Precentor of Saint Flannan’s Cathedral, Killaloe, since January 2017. I have preached there on occasions, and last month I as the first speaker in a series of Advent talks in the cathedral. 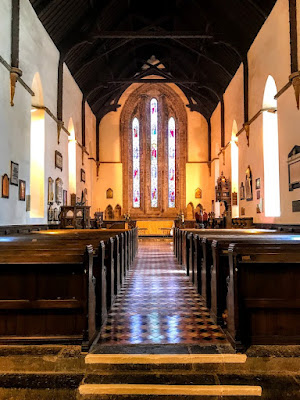 The Diocese of Killaloe has parishes in Co Clare, Co Tipperary, Co Offaly, Co Limerick and Co Laois, and geographically it is one of the larger dioceses in Ireland at about 4,500 sq km, stretching from the Atlantic seaboard in West Clare to the foothills of the Slieve Bloom Mountains in Co Laois.

I was first invited to preach in Saint Flannan’s Cathedral in 1999 at the ordination of the Revd Patricia Hanna. This is one of the six cathedrals in the United Dioceses of Tuam, Limerick and Killaloe in the Church of Ireland – the others are in Limerick, Clonfert, Kilfenora, Tuam and Killala.

Killaloe Cathedral dates from the transition between the Romanesque and Gothic periods of architecture, when King Domhnall Mór O Brien built the first cathedral in Killaloe ca 1180. His cathedral was destroyed by Cathal Carrach of Connaught in 1185. Saint Flannan’s Cathedral was built ca 1200, the nave was completed ca 1225, and the cathedral has been in continuous use since then.

Among the cathedral’s notable features is the imposing east window. The richly carved Romanesque doorway in the south-west corner survives from the earlier cathedral. The stone carving of this doorway dates from ca 1185, and is one of the finest examples of Romanesque sculpture in Ireland. Three of the arches are decorated with chevron or zig-zag ornaments, and covered with animal and foliage designs. The arch was rebuilt in the early 18th century to provide a focus for the reputed burial place of Muircheartach O’Brien, King of Munster, who died during a pilgrimage to Killaloe in 1119. Two grave stones at the base of the doorway are said to mark the spot.

The cathedral also has a unique Ogham stone, dating from ca 1000 AD, which also has a Viking inscription in Runes or Scandinavian script. The Runes read: ‘Thorgrimr carved this cross.’ The Ogham reads: ‘A Blessing on Thorgrimr.’

The High Cross dates from the late 11th or early 12th century. The head of the cross is dominated by the figure of the crucified Christ, surrounded by interlace, fret and animal ornament. The cross originally comes from Kilfenora in north-west Clare, where it had fallen and was broken. It was brought to Killaloe in 1821 by Bishop Richard Mant, who had it erected in the grounds of the Bishop’s Palace at Clarisford. It was brought into the cathedral and embedded in the cathedral walls in the 1930s, but it now stands in the nave of the cathedral.

The font is decorated with arabesque pattern and designs. The rectangular basin of the font dates from the 13th century and is carved on one face with a typical cross and foliage design, probably by a local craftsman. The font was originally a ‘table’ or ‘polypod’ font with five legs mounted on a square plinth. It now stands on a shaft of uncertain date. Although a decree in 1189 stated that every church in Ireland should have ‘an immovable font’ of stone or wood lined with lead, remarkably few mediaeval fonts remain, making the font in Killaloe unique.

The tower was increased in height in the late 18th century and was again altered in 1892 when a peal of bells was installed.

A £200,000 restoration project involving the repair of a Romanesque doorway and the restoring the 12th century high cross was completed in 2001.

On the north side of the cathedral, the earlier oratory may be the original sanctuary of the saint who founded the abbey. 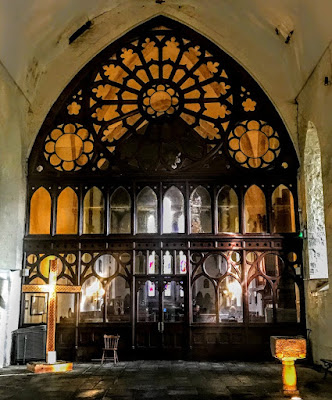 18 Now the birth of Jesus the Messiah took place in this way. When his mother Mary had been engaged to Joseph, but before they lived together, she was found to be with child from the Holy Spirit. 19 Her husband Joseph, being a righteous man and unwilling to expose her to public disgrace, planned to dismiss her quietly. 20 But just when he had resolved to do this, an angel of the Lord appeared to him in a dream and said, ‘Joseph, son of David, do not be afraid to take Mary as your wife, for the child conceived in her is from the Holy Spirit. 21 She will bear a son, and you are to name him Jesus, for he will save his people from their sins.’ 22 All this took place to fulfil what had been spoken by the Lord through the prophet:
23 ‘Look, the virgin shall conceive and bear a son,
and they shall name him Emmanuel’,
which means, ‘God is with us.’ 24 When Joseph awoke from sleep, he did as the angel of the Lord commanded him; he took her as his wife.

The Prayer in the USPG Prayer Diary today (18 December 2021, International Migrants Day) invites us to pray:

Let us remember the plight of migrants around the world. May we offer them hospitality and hope.