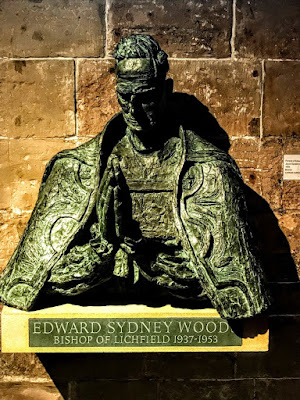 I was writing last night about the stained-glass artist the artist Patrick Reyntiens, who has died recently and who collaborated with John Piper in many of his works, including ‘Christ in Majesty,’ the East Window in the Chapel of Saint John’s Hospital, Lichfield.

John Piper and Patrick Reyntiens may have received the commission for the East Window in Saint John’s because John Piper had several connections with Lichfield. He was commissioned by the Dean of Lichfield, Frederic Iremonger (1878-1952), to design the poster for the cathedral’s 750th Anniversary celebrations in 1947. He also designed a textile cover for the chancel reredos, and John Piper and his wife were close friends of the photographer Janet Woods (1912-1998), daughter of Edward Sydney Woods, Bishop of Lichfield, and her husband, the wood engraver Alan Reynolds Stone. Piper also wrote in 1968 about his admiration for the 16th century Herkenrode Glass in Lichfield Cathedral.

John Piper’s friends, Janet and Reynolds Stone, were distinguished personalities in the arts world their own right: she was an accomplished photographer, while he was a celebrated engraver and typographer. They lived at the Old Rectory in Litton Cheney from 1953 until Reynolds’s death in 1979, but Janet spent a brief time living in the Cathedral Close in Lichfield, and the couple were married in Lichfield Cathedral in July 1938.

Janet Clemence (Woods) Stone was born in Cromer, Norfolk, on 1 December 1912. She was in her mid-20s when she moved briefly to Lichfield in 1937, when her father, Edward Sydney Woods (1877-1953), became the 94th Bishop of Lichfield in 1937. He was born on 1 November 1877, the son of the Revd Frank Woods; his mother, Alice Fry, was a granddaughter of the Quaker prison reformer Elizabeth Fry.

Janet’s mother, Clemence Rachel Barclay (1874-1952), was a daughter of Robert Barclay, a member of a well-known Quaker banking family who lived at High Leigh, near Hoddesdon, Hertfordshire. Clemence Barclay, who was also descended from the abolitionist and social reformer Sir Thomas Fowell Buxton, was born at High Leigh, now a well-known conference centre and regularly the venue for the annual conference of the Anglican mission agency USPG (United Society Partners in the Gospel). 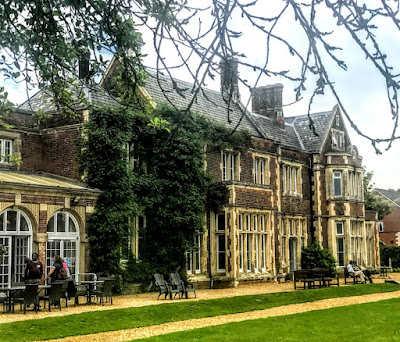 High Leigh, once the home of the family of Clemence Barclay, mother of the photographer Janet Stone; Clemence Woods died in Lichfield in 1952 (Photograph: Patrick Comerford)

The Woods family was well-known in church circle: one of Janet’s brothers, Frank Woods, would later become the Archbishop of Melbourne, while another brother, Robin Woods, was Bishop of Worcester. Janet shared the qualities that singled her father out for Church leadership – a good-tempered, gregarious nature, personal magnetism, organising powers and a strong, melodious voice.

Janet Woods and Reynolds Stone were married in Lichfield Cathedral in July 1938. At the time, she was such a fine a soprano that for three months, early in her marriage, she trained as an opera singer under the famous Italian teacher Miele. He gave her free lessons because he believed she was better equipped to sing Verdi than anyone he had ever met.

But the training separated her too much from her husband and her household, which had become the centre of her life. Her decision to give up her musical career was a loss to opera but not to British cultural life.

Janet and Reynolds Stone lived at the Old Rectory in the village of Litton Cheney, close to Chesil Beach in Dorset, for 26 years. There, her creative energies went into making a perfect environment where some of the best British artists and writers came to work and to relax.

Their circle drew in many clever and talented people and led to some notable collaborations, including his illustrations for a selection of Benjamin Britten’s songs, his dust-jackets for the books of Iris Murdoch and Cecil Day Lewis and his watercolours and engravings for Another Self and Ancestral Voices by James Lees-Milne. The stream of guests in summer brought Reynolds a large number of close friendships.

She worked almost entirely in black-and-white. Most of her best portraits were taken at Litton Cheney, with one of her three cameras, a Canon, a Yashica and an old Rolleiflex, the product of hours of patient observation. Some are said to have an extraordinary spiritual depth – such as those of Iris Murdoch, David Jones and, of course, John Piper.

She took beautiful photographs of her four children in their childhood and youth. Humour runs through many of her photographs: Iris Murdoch’s husband, John Bayley (1925-2015), Professor of English Literature at Oxford, is seen lying happily asleep on a railway line; she photographed John Sparrow (1906-1992), Warden of All Souls’ College, Oxford, reading absorbedly with a tea-cosy on his head.

After her husband died in 1979, Janet Stone gave up the house and entertaining at Litton Cheney. She died in Salisbury, Wiltshire, on 30 January 1998.

Her life with Reynolds Stone and their home are commemorated in her photographs. Some of these photographs were published in her Thinking Faces (1988). Others were commissioned for books and magazines. She took the author portrait for Kenneth Clark’s book Civilisation (1969), based on his television series. A collection of her prints is now in the archive of the National Portrait Gallery, London.

Reynolds Stone was born at Eton on 13 March 1909, where both his father and grandfather were house masters. He read history at Magdalene College Cambridge. During an unofficial apprentice at the Cambridge University Press with Walter Lewis, he began experimenting with engraving on metal and wood. A chance meeting on a train from London to Cambridge with Eric Gill brought an invitation to stay at Gill’s house at Pigotts. There he engraved an alphabet under Gill’s supervision.

His many commissions included engraving his first royal bookplate for the future Queen Mother and headings for the Nonesuch Shakespeare. He was commissioned to engrave the royal arms for the order of service for the coronation of King George VI in 1937, but he was late, and the order of service went to press with an inferior design. However, the reprint contained Stone’s engraving.

He married Janet Woods in Lichfield in 1938, and they first moved to Bucklebury, Berkshire. At this time, he illustrated Rousseau’s Confessions for the Nonesuch Press and The Praise and Happinesse of the Countrie-Life for the Gregynog Press.

He taught himself to cut letters in stone in 1939. During World War II, he worked as an aerial photographic interpreter for the RAF, and he continued to engrave.

Janet and Reynolds Stone moved to the Old Rectory in Litton Cheney in 1953, and he was made CBE that year.

Reynolds engraved the clock device, the court circular, and the royal arms headings for The Times. Other engravings included the royal arms for the coronation of Queen Elizabeth II, and the coat of arms still seen on the British passport.

He engraved hundreds of bookplates, including those of Benjamin Britten, Peter Pears and Prince Charles, designed the 3d Victory Stamp (1946), and the £5 and £10 notes that were in use until decimalisation. His many memorials in stone and slate include those of Winston Churchill, Ralph Vaughan Williams and TS Eliot in Westminster Abbey.

He illustrated many books, but his magnum opus is the set of engravings, The Old Rectory (1976), published by Warren Editions. His last works included engraved illustrations for A Year of Birds, with poems by Iris Murdoch.

In her memorial address, Iris Murdoch said: ‘Good art shows us reality, which we too rarely see because it is veiled by our selfish cares, anxiety, vanity, pretension. Reynolds as artist, and as man, was a totally unpretentious being. His work, seemingly simple, gives to us that shock of beauty which shows how close, how in a sense ordinary, are the marvels of the world.’ 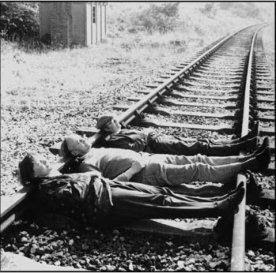