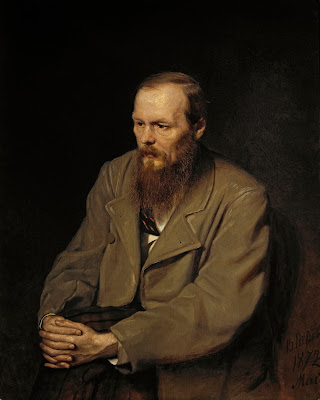 We are in the final days week of Advent, and there are Christmas sermon, the details of Christmas services to finalise, and Home Communions to organise. Today (22 December2021) is going to be a busy day, but before this busy day begins, I am taking some time early this morning for prayer, reflection and reading.

Each morning in my Advent calendar this year, I have been reflecting in these ways:

There is no commemoration in the Church Calendar today [21 December]. But this morning I am reflecting on the life and work of the great Russian writer Fyodor Mikhailovich Dostoevsky (1821-1881), who was born 200 years ago in 1821, died 140 years ago in 1881, and who has inspired the work and writings of many great theologians.

Dostoevsky’s literary works explore the human condition in the troubled political, social, and spiritual atmospheres of 19th-century Russia, and engage with a variety of philosophical and religious themes. His best-known novels include Crime and Punishment (1866), The Idiot (1869), Demons (1872), and The Brothers Karamazov (1880).

Many regard him as one of the greatest novelists in all of literature, and he is also regarded as a philosopher and the theologian. His work includes some of the most influential literary masterpieces. Notes from Underground (1864) is one of the first works of existentialist literature.

The former Archbishop of Canterbury, Archbishop Rowan Williams, writing in the current edition of The New Statesman (10 December 2021 to 6 January 2022), honestly discusses Dostoevsky’s many ambiguities and weaknesses, including his ‘prejudices and obsessions’ which remain ‘repugnant.’ Yet, he says, Dostoevsky ‘does not have to be a saint or an infallible moral guide’ for us to see the significance of his legacy at the present time.

Dostoevsky was born in Moscow on 11 November 1821 into a Russian Orthodox family of noble ancestry that included many priests, while his father was a military doctor. After graduating, he worked as an engineer and briefly enjoyed a lavish lifestyle, translating books to earn extra money. He wrote his first novel, Poor Folk, in the mid-1840s.

He was arrested in 1849 as part of a literary group that discussed banned books critical of Tsarist Russia. He was sentenced to death, and on this day, 22 December 1849, he and his friends were paraded before a firing squad. Then, as Rowan Williams describes, ‘in a piece of sadistic official theatre, their reprieve was announced at the very last moment.’

His death sentence was commuted, and he spent four years in a Siberian labour camp, followed by six years of compulsory military service in exile. The trauma haunts of almost-execution haunts many pages of his work, and his experience in the prison camp was what Archbishop Williams describes as ‘the seedbed of the most formidable changes in his thinking and sensibility.’

Shortly after his release from prison, Dostoevsky wrote to Natalya Fonvizinia in 1854, ‘If someone were to prove to me that Christ was outside the truth, and it was really the case that the truth lay outside Christ, then I should choose to stay with Christ rather than with the truth.’

In the years that followed years, he worked as a journalist, publishing and editing several magazines and later A Writer’s Diary. He began to travel around western Europe and he developed a gambling addiction that led to financial hardship. For a time, he had to beg for money, but he became the greatst of Russian writers.

His writings influenced a great number of later writers including Russians such as Aleksandr Solzhenitsyn and Anton Chekhov, the philosophers Friedrich Nietzsche and Jean-Paul Sartre, theologians from Karl Barth to Rowan Williams, and the emergence of Existentialism.

Dostoevsky’s work is profoundly and explicitly religious, framed in the context of his deep Russian Orthodox faith. By the time of his death, he had developed a unique approach to theology, religious anthropology, and spirituality that continues to exert a profound influence on the Orthodox Church and the Christian world more broadly. He has been described as ‘a prophet forewarned of the politicised humanistic delusions of the 20th century: a prophet crying out in the wilderness.’

His dying wish was to have the Parable of the Prodigal Son be read to his children. The profound meaning of this request is pointed out by Joseph Frank in his biography of Dostoevsky: ‘It was this parable of transgression, repentance, and forgiveness that he wished to leave as a last heritage to his children, and it may well be seen as his own ultimate understanding of the meaning of his life and the message of his work.’

Among Dostoevsky's last words was his quotation of Matthew 3: 14-15: ‘John would have prevented him, saying, “I need to be baptized by you, and do you come to me?” But Jesus answered him, “Let it be so now; for it is proper for us in this way to fulfil all righteousness.” Then he consented.’

He died on 9 February 1881 and was buried in the Tikhvin Cemetery at the Alexander Nevsky Convent. His gravestone is inscribed with lines from Saint John’s Gospel: ‘Very truly, I tell you, unless a grain of wheat falls into the earth and dies, it remains just a single grain; but if it dies, it bears much fruit’ (John 12: 24).

His largest work, The Brothers Karamazov, is his magnum opus. It tells the story of the novice Alyosha Karamazov, the non-believer Ivan Karamazov, and the soldier Dmitri Karamazov.

The most famous chapter is ‘The Grand Inquisitor,’ a parable told by Ivan to Alyosha about Christ’s Second Coming in Seville, where Christ is imprisoned by a 90-year-old Grand Inquisitor. Instead of answering the Inquisitor, Christ gives him a kiss, and the Inquisitor subsequently releases him, telling him not to return. Most contemporary critics and scholars agree that Dostoevsky is attacking socialist atheism, represented by the Inquisitor.

The former Archbishop of Canterbury, Archbishop Rowan Williams, took three months off to write his comprehensive book on Dostoevsky’s faith and influence on theology in Dostoevsky: Language, Faith and Fiction (Continuum 2009). In the current edition of The New Statesman, Archbishop Williams, Dostoevsky’s work point to the ‘signs of the transcendent divine stranger whose voice summons everything and everyone into existence.’

‘My soul magnifies the Lord,
47 and my spirit rejoices in God my Saviour,
48 for he has looked with favour on the lowliness of his servant.
Surely, from now on all generations will call me blessed;
49 for the Mighty One has done great things for me,
and holy is his name.
50 His mercy is for those who fear him
from generation to generation.
51 He has shown strength with his arm;
he has scattered the proud in the thoughts of their hearts.
52 He has brought down the powerful from their thrones,
and lifted up the lowly;
53 he has filled the hungry with good things,
and sent the rich away empty.
54 He has helped his servant Israel,
in remembrance of his mercy,
55 according to the promise he made to our ancestors,
to Abraham and to his descendants for ever.’
56 And Mary remained with her for about three months and then returned to her home.

The Prayer in the USPG Prayer Diary today (22 December 2021) invites us to pray:

We pray for the Anglican Council of Zimbabwe and the work they are doing to reduce stigma around HIV/AIDS.