‘The Objects of Love’: intimate
story of love, loss, and
survival in the Holocaust

Forged identity papers from Warsaw 1941 in the name of Krystyna Szczepanska, a pseudonym for Edyta Rozenfeld, the grandmother of Oliver Sears … one of the exhibits in ‘The Objects of Love’ an exhibition in Dublin Castle (Photograph: Patrick Comerford, 2022

Today is Holocaust Memorial Day, marking the anniversary of the liberation of Auschwitz in 1945 and the beginning of the liberation of the concentration camps in Europe. Earlier this week I attended ‘The Objects of Love’ an exhibition in Dublin Castle organised by the Office of Public Works in association with Holocaust Awareness Ireland.

‘The Objects of Love’ is an exhibition of powerful mementoes that tell the story of one Jewish family before, during and after World War II. The exhibition in the Bedford Hall opened on 12 January, a fortnight before Holocaust Memorial Day, and this is a poignant exhibition telling the fate of individual lives torn asunder in Nazi-occupied Poland and beyond.

Their story is told through a curated collection of precious family objects, photographs and documents. The Dublin-based art dealer Oliver Sears vividly brings to life this extreme edge of European history where his mother Monika and grandmother Kryszia are the beating hearts of an epic and intimate story of love, loss, and survival.

Oliver Sears, who grew up in London and owns an art gallery in Dublin, is the founder of Holocaust Awareness Ireland. His family came from the Polish city of Lodz, which had a population of 200,000 Jews before the war.

He has painstakingly chronicled how their lives were torn apart following the Nazi invasion in 1939. He said: ‘They were ordinary people. It's just that fate intervened and ensured that they had extraordinary lives. This is my family story, told through my eyes, the only way I know how, using fragments of memory I have recorded, together with the collection of objects and documents, the emotional debris of dislocation and disaster.’

The items in the exhibition include forged identity papers belonging to his grandmother. ‘They show a passport sized photograph of my grandmother with freshly dyed blonde hair staring straight ahead. A new and necessary look to heighten her Aryan credentials, along with her acquired, nondescript Polish name and unlikely declared profession of ‘typist’.’

‘When I think about the Holocaust and what happened to my family, strangely I don't feel anger. It's humiliation. What could be more humiliating than having to pretend that you are something you are not, because your life depends on it.’

Oliver Sears hopes the exhibition raises awareness and understanding of a subject that ‘is still not widely known in Ireland.’ He says the exhibition is important to illustrate the generational impact the Holocaust had on families, and in the context of antisemitism that still persists today.

He explains how he felt he was honouring his family by bringing their story to Dublin Castle. ‘I think the fact that we were invited by the OPW to produce this exhibition at Dublin Castle gives us, in a nutshell, the imprimatur of the State. I do have a very keen sense of needing to honour my family. At an almost biblical level, they were humiliated.

‘Not only were they murdered, every trace that they ever existed was wiped out. So, there is a sense of triumph that I, somehow, at State-level can give them a voice, bring them back to life briefly, and give them a value that was stripped from them.’

In November 2020, he had found a cache of photographs and documents relating to his family in the US Holocaust Memorial Museum in Washington DC.

By organising this exhibition, he says he can honour his family, he told The Irish Times. ‘You can have massive gaps in your family, there are all these ghosts. There are people who you never knew, who you should have known. Then there are the living ghosts, who are badly traumatised, who weave in and out of your childhood, some of whom you are related to.’
The forged identity papers of Oliver Sears’s grandmother Kryszia Wandstein (Edyta Rosenfeld). In spring 1943, Edyta bought forged identity papers that allowed her and her daughter Monika to live outside a ghetto.

When his grandmother and mother came to England in 1947, his grandmother married a Polish Jewish dentist who was stranded in London during the war. He had lost every single member of his family, including his pregnant wife. ‘He married my grandmother. He was the only grandfather I knew. I didn’t know he wasn’t my real grandfather until the day he died.’

The photographs from before the war are the most moving to Oliver Sears, as they show ordinary people, with hopes, dreams and aspirations, and that was all destroyed. However, he feels the exhibition is an act of resistance in itself, as the Nazis’ goal was to eradicate Jewish people completely. ‘It says: ‘No. Where are you, with your thousand-year reich? We are still here’.’

The exhibition was opened by Lenny Abrahamson and is accompanied by an audio narration and an illustrated booklet.

Speaking before the exhibition, the Minister at the OPW, Patrick O’Donovan, said: ‘The Holocaust represents an event at the limits, a core event in which a shared European memory is rooted that we in Ireland are part of. But it is only through our own personal engagement with the past that we can understand its legacy and continued relevance to our present and future. This exhibition particularises the experience of one family and offers us a unique opportunity to both relate to and bear witness to the fate of those persecuted by the Nazis.’ 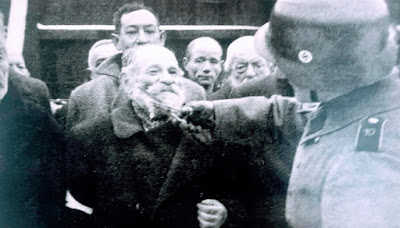 Nazis humiliating Jews publicly in the Kraków ghetto in 1941