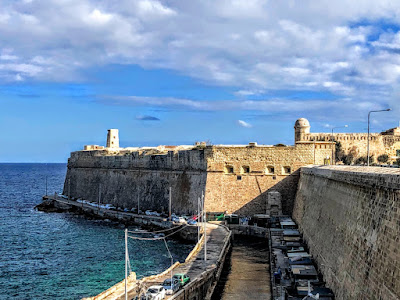 I have been in Valetta this week, where it seems as though every street – or every second street – inside the walls of the capital of Malta is named after a saint. I am due to fly back to Dublin this morning, and then to return to Askeaton. But before this day begins, I am taking some time early this morning for prayer, reflection and reading.

Saint Erasmus of Formia, also known as Saint Elmo, was martyred ca 303, and is regarded as the patron saint of sailors and abdominal pain. He is also one of the Fourteen Holy Helpers, saintly figures of Christian tradition who are venerated especially as intercessors.

Saint Erasmus was the Bishop of Formia in Italy. During the persecution against Christians under the emperors Diocletian (284-305) and Maximian Hercules (286-305), he left his diocese and went to Mount Libanus, where he hid for seven years. However, an angel is said to have appeared to him, and advised him to return to his city.

On the way, he met some soldiers who questioned him. Erasmus admitted that he was a Christian and they brought him to trial at Antioch before the emperor Diocletian. After suffering terrible tortures, he was bound with chains and thrown into prison, but an angel appeared and helped him escape.

He passed through Lycia, where he raised from the dead the son of an illustrious citizen. This resulted in a number of baptisms, and in turn drew the attention of the Western Roman Emperor Maximian who was ‘much worse than was Diocletian.’

Maximian ordered his arrest but Erasmus continued to confess his faith. They forced him to go to a temple of the idol, but along Erasmus’s route all the idols fell and were destroyed, and fire then came from the temple and fell upon many of the pagans.

These actions angered the emperor, who had Erasmus enclosed in a barrel full of protruding spikes and rolled down a hill. An angel healed him from these wounds. When he was recaptured, he was brought before the emperor and beaten and whipped, then coated with pitch and set alight, yet he still he survived. When he was thrown into prison with the intention of letting him die of starvation, Erasmus escaped.

He was recaptured and tortured in the Roman province of Illyricum, after boldly preaching to and converting many pagans. Finally, according to lore, his abdomen was slit open and his intestines wound around a windlass.

Saint Erasmus may have become the patron of sailors because he is said to have continued preaching even after a thunderbolt struck the ground beside him. This prompted sailors, who were in danger from sudden storms and lightning, to claim his prayers. The electrical discharges at the mastheads of ships were read as a sign of his protection and came to be called ‘Saint Elmo’s Fire.’

Saint Erasmus is the patron of Gaeta, Santeramo in Colle and Formia, and gives his name to Fort Saint Elmo, a star fort in Valletta. It stands on the seaward shore of the Sciberras Peninsula that divides Marsamxett Harbour from Grand Harbour, and commands the entrances to both harbours along with Fort Tigné and Fort Ricasoli. It is best known for its role in the Great Siege of Malta of 1565.

The fortified watchtower was already on the tip of the Sciberras Peninsula by 1417. When the Aragonese built a watchtower on Saint Elmo Point in 1488, it was dedicated to Saint Erasmus of Formia or Saint Elmo.

The Order of Saint John or Knights of Malta reinforced the tower in 1533 because of its strategic location. After Ottoman raid in 1551, when the Turkish fleet sailed into Marsamxett Harbour unopposed, the tower was demolished and a new star fort was built. It was designed by a Spanish engineer, Pietro Pardo.

When the Ottomans invaded Malta once again in 1565, Fort Saint Elmo was the scene of some of the most intense fighting. It withstood massive bombardment from Turkish cannon deployed on Mount Sciberras that overlooked the fort and from batteries on the north arm of Marsamextt Harbour, the present site of Fort Tigné. The initial garrison of the fort was around 150 knights and 600, the majority of them Spanish, and 60 armed galley slaves.

During the bombardment of the fort, a cannon misfired and hit the top of its parapet, sending shards in all directions. Debris from the impact killed the gunner and mortally injured the corsair and Ottoman admiral Dragut, one of the most competent of the Ottoman commanders. The fort withstood the siege for 28 days, falling to the Turks on 23 June 1565.

None of the defending knights survived, and only nine of the Maltese defenders survived by swimming across to Fort Saint Angelo on the other side of the Grand Harbour after Fort Saint Elmo fell. The long siege bought much needed time for the preparation of the other two fortresses and the arrival of reinforcements from Spain.

After the siege, Grandmaster Jean Parisot de Valette decided to build a new city on the peninsula. The construction of Valletta started in 1566, and Francesco Laparelli designed the fortifications, and the ruined Fort Saint Elmo was rebuilt and integrated within the city walls.

In 1775, 13 rebel priests captured Fort Saint Elmo and Saint James Cavalier in what became known as the Revolt of the Priests. The order’s flag was lowered and a banner of Saint Paul was raised instead. When the order recaptured Saint Elmo, the rebels in control of Saint James also surrendered. Three of the rebel priests were executed and the others were exiled or imprisoned.

British forces modified the fort in the early 19th century. The hospital at Saint Elmo was the venue in 1917 for the first heart operation to be performed on a soldier. During World War II, the fort was the site of the first aerial bombardment of Malta on 11 June 1940. Parts of the fort were severely damaged during the war. Since the mid-20th century, Fort Saint Elmo has housed Malta’s police academy.

The World Monuments Fund placed the fort on its Watch List in 2008. Major restoration works out since 2009 have included restoring Upper Saint Elmo and the Carafa enceinte. Lower Saint Elmo has been cleaned from waste that accumulated over the years.

When the fort was used as a media centre for the Valletta Summit on Migration in 2015, foreign journalists said it was possibly ‘the most stunning venue which ever hosted an EU summit.’

Saint Elmo or Saint Erasmus is celebrated on 2 June.

13 [Jesus] went up the mountain and called to him those whom he wanted, and they came to him. 14 And he appointed twelve, whom he also named apostles, to be with him, and to be sent out to proclaim the message, 15 and to have authority to cast out demons. 16 So he appointed the twelve: Simon (to whom he gave the name Peter); 17 James son of Zebedee and John the brother of James (to whom he gave the name Boanerges, that is, Sons of Thunder); 18 and Andrew, and Philip, and Bartholomew, and Matthew, and Thomas, and James son of Alphaeus, and Thaddaeus, and Simon the Cananaean, 19 and Judas Iscariot, who betrayed him. Then he went home.

The Prayer in the USPG Prayer Diary today (21 January 2022) invites us to pray in these words:

Let us pray for ecumenical initiatives, both in Bangladesh and across the Anglican Communion. May we recognise that we have more in common than that which divides us. 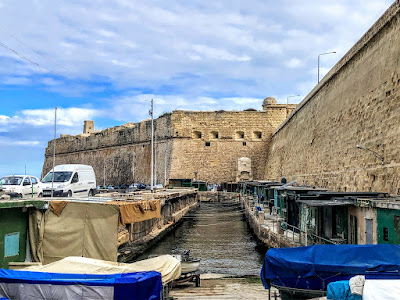 Posted by Patrick Comerford at 05:00