The former ticket office and waiting room of the light railway on the corner of Wolverton Road and High Street in Stony Stratford (Photograph: Patrick Comerford, 2022)

A sign on the corner of Wolverton Road and High Street in Stony Stratford gives a very full, illustrated account of the Stony Stratford Light Railway. The sign stands in front of the former ticket office and waiting room of the light railway.

The Stony Stratford to Wolverton Steam Tramways Company began operations in May 1887, carrying hundreds of workers to the Railway Works and McCorquodale’s printing factory, and passengers to Wolverton Railway Station. The line was extended through Old Stratford to Deanshanger in 1888.

The light railway used one of the largest tramcars ever built at over 44 ft in length, and it carried 120 passengers. Despite financial difficulties, the tram ran for 39 years until its last run in May 1926.

One small panel on the display board asks: ‘Did You Know …? The second managing director of the Tramway was Mr Louis Clovis. His full name and title was Prince Louis Clovis Bonaparte, the Grandnephew of Napoleon Bonaparte.’

One local resident, Herbert Meacham, later told the Mercury & Herald in 1954, ‘I can remember the tram company manager well. He had the grand name of Louis Clovis Bonaparte. He lived at Old Stratford and whenever he spent a night celebrating in Stony Stratford, they ran the tram specially to take him home.’

One local historian has suggested: ‘Obviously the reason for his secrecy being that the Napoleonic Wars were still in living memory.’

But there were more direct reasons for Louis Clovis Bonaparte not using his full name in Stony Stratford where he worked and in Old Stratford he lived. He was jailed in 1891 for defaulting on payment for stocks and shares he had bought and for failing to pay his doctor’s bills. In addition, by Victorian standards, both the circumstances of his birth and his involvement in a number of cases of bigamy and divorce were regarded as scandals.

Louis Clovis was born on 11 February 1859, the only son of Prince Louis Lucien Bonaparte and his mistress, Clémence Richard. Later in life he called himself prince although he had no right to assume the title as his parents did not marry until shortly before his death.

The Stony engineer’s grandfather, Prince Lucien Bonaparte, lived much of his exile after he came to oppose many of Napoleon’s policies. Lucien spurned all imperial honours and went into self-imposed exile by living initially in Rome, where he bought the Villa Rufinella in Frascati.

The British government allowed Lucien to settle with his family at Ludlow, and later at Thorngrove House in Grimley, Worcestershire. Napoleon regarded Lucien as a traitor. Back in Rome, o Rome, where on 18 August 1814 he was Pope Pius VII made him Prince of Canino in 1814, and Lucien returned briefly to the cause of Napoleon who made him an imperial prince

But Lucien returned to England after Waterloo, and later Pope Leo XII made him Prince of Musignano in 1824.

One of Lucien’s daughters, Letizia (1804-1871), married Sir Thomas Wyse (1791-1862) of Waterford, later British ambassador to Greece. One of his sons, Prince Louis Lucien Bonaparte (1813-1891), inherited many of the Papal titles and became a French senator. But he returned to England around 1852, and spent most of the rest of his life in London.

Prince Louis Lucien Bonaparte had married Maria Anna Cecchi in Florence in 1833. They separated in 1850, he began living with Clémence Richard (1830-1915), and their son, Louis Clovis, was born in London 1859. Louis Lucien regarded himself as a devout Catholic, and he refused to divorce Maria Anna. She died on 17 March 1891, and, after many years of living together, Louis Lucien and Clémence Richard were married in Kensington on 15 June 1891.

By that time, however, Prince Louis Lucien’s health was failing. He went to stay with his niece in Fano, Italy, and died there of heart failure on 3 November 1891, less than five months after the marriage, and just three weeks after recognising his son Louis Clovis on 12 October 1891. His body was brought back to London and he was buried in Saint Mary’s Cemetery in Kensall Green.

Louis Clovis of Stony Stratford was born Louis Clovis Richard on 11 February 1859. Although his parents were not married, he lived them in London. He trained as a railway engineer and was living in Gateshead in 1879 and Newcastle in 1881.

At some time around 1878-1883, Louis Clovis is said to have married Nita Gerald, an English actress who appeared in burlesque and pantomimes and who toured with theatre companies in Britain, Australia, and the US.

After leaving Nina and their children, Louis Clovis entered into two further marriages, although the legitimacy of each marriage has been questioned and there were no children in either case.

Louis married Rosalie Barlow on 30 May 1888 in Saint Thomas’s Church, Douglas, on the Isle of Man. Rosalie was born in Altrincham in 1863, the daughter of Robert Barlow. But she had already married Norfolk Bernard Megone in Saint Saviour’s Church, Hampstead, on 20 Decemr 1884.

Megone successfully divorced Rosalie, citing Louis as the co-respondent. He had walked out on Rosalie on 27 September 1891, and three weeks later married his second (or third) wife, 19-year-old Laura Elizabeth Scott (1872-1953) from Hackney on 14 October 1891; four months earlier, his parents had married on 15 June 1891 and two days earlier his father had publicly recognised him as his son.

However, Louis Clovis was charged on 12 January 1892 with conspiracy to defraud Rosalie Clovis Bonaparte of jewellery valued at £20,000. It seems Louis and Rosalie had conspired to blackmail and defraud Dr John George Sinclair Coghill of Ventnor, a doctor on the Isle of Wight. Coghill accused them of refusing to pay their medical bills, while Rosalie seems to have attempted to be a willing ‘honey trap’, accusing the doctor of attempting to seduce and defraud her.

The complex marriage arrangements of all involved were exposed in court, despite Rosalie’s attempts to avoid turning up as a witness, and became a Victorian scandal when Louis’s bigamous marriage to Rosalie was revealed in court the following year.

Until then, perhaps, Louis Clovis’s career as a civil engineer was promising. He was only 35 when he died at 52 Chepstow Villas in London on 14 May 1894, 2½ years after his father’s death. He was buried near his father at Saint Mary’s Cemetery, Kensal Green.

His gravestone says he was ‘endowed with a warm heart, he was beloved by all his friends, inheriting much of the talent of his distinguished family.’

His wife, who called herself Princess Laura, and his mother, Princess Clémence Richard, quarrelled over his small estate. Clémence died in 1915, Laura married Arthur Evelyn Brooke in 1900 and died in 1953; both women may have been buried beside the engineer-prince who once worked in Stony Stratford. 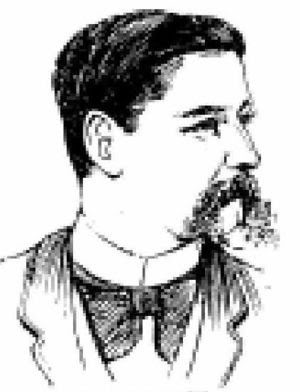 The few Irish connections with the Bonaparte family are interesting andmuch written about.

It is not really a connection but a big portrait of a dejected Napoleon I hangs at Johnstown Castle near Wexford town. It is said that it used to hang in the Young Mens' Christian Association building in Wexford Town but no one seems to know how it got there. An official of the Dept. of Agriculture bought it for his office at the Castle when that building formed part of a research institute. Napoleon is shown dejected on a seashore with (presumably) a sunset behind him. The French tricolour flag lies on the ground near his feet. I wonder if anyone might know how the YMCA came by this portrait. Dominic Berridge, Co. Wexford