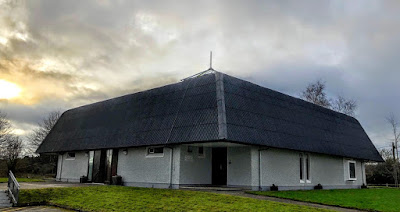 The new, modern Roman Catholic parish church in Mungret village, on the outskirts of Limerick City, is in sharp contrast to the nearby ruins of the monastic churches and buildings from the monastery founded by Saint Nessan in the sixth century, and the ruins of the former Church of Ireland parish church.

At one time, it is said, the monastery at Mungret had at least six functioning church. But the present parish church, dedicated to Saint Oliver Plunkett, is the newest church in Mungret.

In the Roman Catholic Diocese of Limerick, Mungret, Crecora and Raheen form one parish, which is an interesting mixture of urban, suburban and rural life. 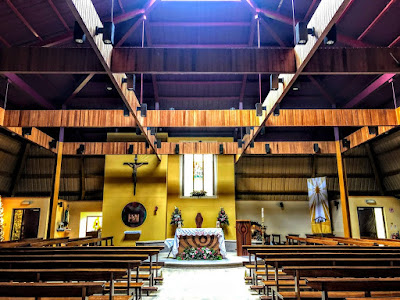 Inside the Church of Saint Oliver Plunkett in Mungret (Photograph: Patrick Comerford, 2020)

At one time, this was very much a rural area, but suburban Limerick expanded rapidly from the 1960s on. The parish grouping stretches from the banks of the River Shannon, near Mungret to beyond the southern edge of the N20 road and reaches out into the Golden Vale in the direction of Adare, Cork and Kerry.

The parish church in Mungret was built in 1981 to cater for the population growing up around Mungret village. The church was dedicated to Saint Oliver Plunkett (1625-1681), the martyred 17th century Archbishop of Armagh. 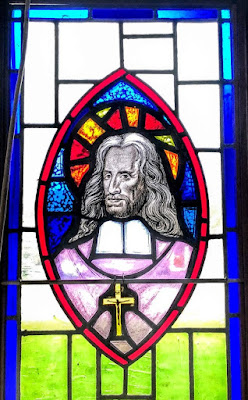 The parish website describes him as ‘a victim of the Cromwellian persecution in the 17th century.’

In fact, Oliver Plunkett was in Rome throughout the Cromwellian period (1649-1658). He was sent to Rome by his family in 1647 to study at the Irish College, and was ordained priest there in 1654. He remained in Rome as the representative of the Irish bishops throughout the period of the Commonwealth period and during the first decade of the reign of Charles II.

He was consecrated Archbishop of Armagh in Ghent on 30 November 1669, and eventually arrived back in Ireland on 7 March 1670, and was based in Drogheda for most of the nine years that followed. 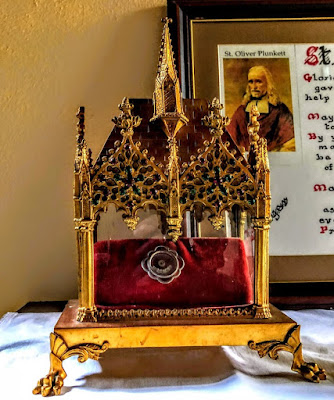 He was arrested in Dublin in December 1679, jailed in Dublin Castle, and put on trial in Dundalk. When the trial collapsed, he was moved to Newgate Prison in London, tried at Westminster Hall in the wake of the Titus Oates plot, and was convicted of high treason in June 1681. He was hanged, drawn and quartered at Tyburn on 1 July 1681; he was 55 and the last Catholic martyr to die in England.

He was beatified in 1920 and canonised in 1975, becoming the first new Irish saint for almost 700 years.

His canonisation gave new popularity to the martyred archbishop, and when the new church opened in Mungret in 1981 it was dedicated to Saint Oliver Plunkett. 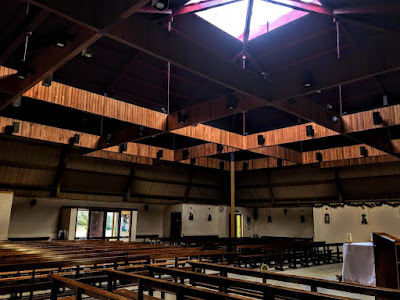 The church is square shaped with a mansard-style roof (Photograph: Patrick Comerford, 2020)

The church was designed by the Limerick architects John and Nuala Kernan. Their whose other churches in the area include the Church of Christ the King in Caherdavin.

The church was opened by Bishop Jeremiah Newman and Father Eamon Dillane, PP on 20 September 1981.

The church is square-shaped and has a large, dark, mansard-style roof and low white walls with irregularly placed and varied windows, including a stained-glass window on the right-hand side depicting Saint Oliver Plunkett.

Other windows depict the Holy Spirit, the Lamb of God and the Bread and Wine of the Eucharist. 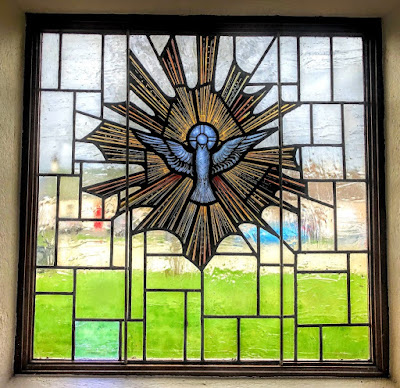 There is shrine and a reliquary containing a relic of Saint Oliver Plunkett close to the stained-glass window with his image.

The church was designed so it could be extended if the growth in population made this necessary.

The architects John and Nuala Kernan were present at the launch of Dr Liam Irwin’s book, The Diocese of Limerick: an illustrated history, published in 2013. John Kernan died in 2016.

The Main Street in Mungret, Co Limerick … the village is fast becoming a suburb of Limerick City (Photograph: Patrick Comerford, 2020)