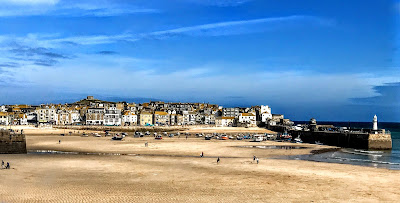 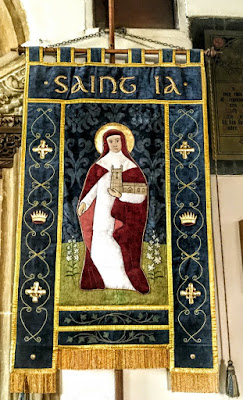 One of Cornwall’s main tourist attractions is the Saints’ Way, a 43 km trail that is well signed with Celtic cross markers and takes pilgrims, tourists and walkers across Cornwall from Padstow in the north to Fowey on the south coast.

This follows the route of early pilgrims making their way from Ireland and Wales to Brittany or Santiago de Compostella in Spain. It starts at the harbour in Padstow and heads along Little Petherick Creek, over St Breock Downs and onto Lanivet.

The second part of the walk visits Helman Tor, heads south by the Fowey River, skirts the ancient town of Lostwithiel, and continues on to Fowey, where the pilgrims set sail. 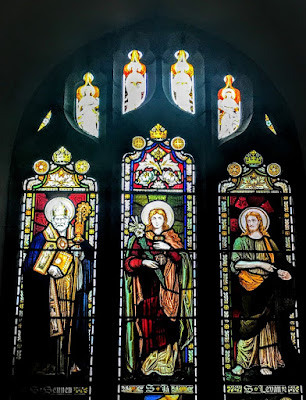 Cornish legend says Joseph of Arimathea was a tin trader who visited Cornwall, and that he brought a young Jesus to address the miners.

From early times, Saint Michael the Archangel was recognised as the patron of Cornwall, and he gives his name to Saint Michael’s Mount off Marazion, which corresponds to a similarly named monastery in Normandy.

The Scilly Isles have been identified as the place of exile of two heretical fourth century bishops from Gaul. Instantius and Tiberianus were followers of Priscillian and were banished after the Council of Bordeaux in 384. 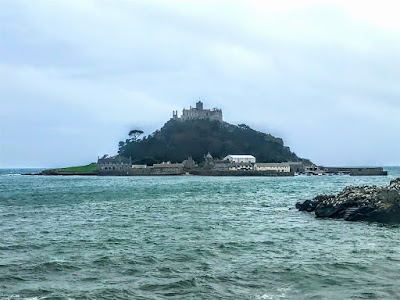 But little is known about the early beginnings of Christianity in Cornwall, it probably owes its origins to post-Patrician Irish missions. Records of those early times are sparse and oral traditions were handed down long before written accounts of the lives of these saints were recorded.

Saint Ia of Cornwall and her companions, Saint Piran, Saint Sennen and Saint Petroc, and the rest of the saints who came to Cornwall in the late fifth and early sixth centuries, introduced or reintroduced Christianity to Cornwall, and brought their own customs and rites.

Saint Piran, who gives his name to Perranporth, is regarded by many as the patron saint of Cornwall, as is Saint Petroc, who was the patron of the pre-Norman Cornish diocese. 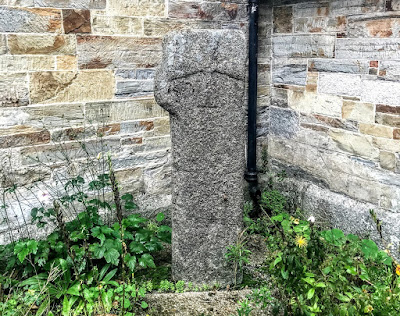 A Cornish Cross in the churchyard at St Agnes (Photograph: Patrick Comerford, 2019)

The earliest inscribed stones with inscriptions in Latin or Ogham date from the fifth century, and some have Christian symbols. Although they are difficult to date precisely, they are thought to come from the fifth to eleventh centuries.

Both the inscriptions and the Ruin of Britain by Gildas suggest that the leading families of Dumnonia or early Cornwall were Christian in the sixth century. Many early mediaeval settlements included hermitage chapels that are often dedicated to Saint Michael, who is associated with Saint Michael’s Mount, off Marazion.

Throughout Cornwall there is a large number of wayside crosses and inscribed Celtic stones. The inscribed stones, about 40 in number, are thought to be earlier in date than the crosses and are a product of Celtic Christian society.

Cornwall has over 400 traditional Celtic crosses, the highest density in any nation. These crosses may represent a development from the inscribed stones, but nothing is certain about dating them. They are found in a variety of locations, by the wayside, in churchyards, and in moorlands. Some may be route markings, a few may be boundary stones, and others could be wayside shrines. They are plain or ornamented, often carved in granite and with the wheel-headed style of Celtic crosses. 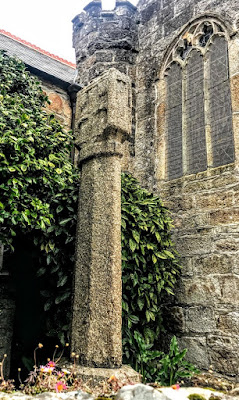 A Celtic Cross in the churchyard at St Ives (Photograph: Patrick Comerford, 2019)

Over 100 holy wells survive in Cornwall, each associated with a saint – although this is not always the same saint as the one commemorated in the name of the local church.

The church architecture in Cornwall and Devon typically differs from the rest of southern England. Most mediaeval churches in the larger parishes were rebuilt in the later mediaeval period with one or two aisles and a western tower; the aisles the same width as the naves and the piers of the arcades are of one of a few standard types. 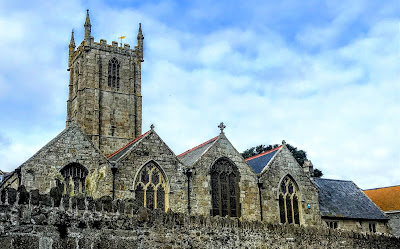 In the mid-ninth century, the Church in Cornwall was led by Bishop Kenstec, who lived at Dinurrin, sometimes identified with Bodmin. Bishop Kenstec acknowledged the authority of Ceolnoth and brought Cornwall under the jurisdiction of the Archbishop of Canterbury. By the 880s, many Saxon priests were being appointed in Cornwall and many of the church estates passed to the kings of Wessex.

In 909, the English or Anglo-Saxon Church created the Diocese of Crediton to cover Devon and Cornwall. King Athelstan of England (924-939) fixed Cornwall’s eastern boundary at the east bank of the Tamar, the remaining Cornish people were evicted from Exeter and the rest of Devon, and in Athelstan built a cathedral at St Germans, near Saltash in 926, with a bishopric at St Germans to cover the whole of Cornwall.

Bishop Conan was consecrated in 931, but it is not clear whether he was the sole bishop for Cornwall or the principal bishop in the area. The church in Cornwall may have been similar to the church in Wales, where each monastery or major religious house had a bishop.

At first, the new bishopric was subordinate to the see of Sherborne. By the end of tenth century, it emerged as a full bishopric in its own right, with a Bishop of Cornwall. But while the first few bishops were native Cornish, from 963 on they were all English. From around 1027 the see was held jointly with Crediton, and they were merged in 1050 to become the Diocese of Exeter. 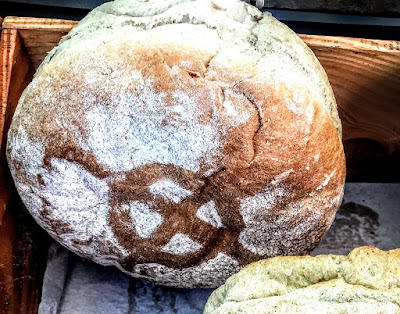 A ‘Miner’s Loaf’ with a Cornish Cross on a market stall in Truro (Photograph: Patrick Comerford, 2019)

It is not clear the degree to which the distinctive qualities of Celtic Christianity survived in Cornwall. But these traditions brought the church in Cornwall into conflict with the neighbouring Anglo-Saxon church in Wessex, and the differences continued until at least the tenth century.

After the arrival of the Normans, many of the earlier but remote churches associated with the Celtic missionaries and saints remained as parish churches, while the churches in the mediaeval Norman towns became mere chapels of ease to the older, traditional parish churches.

Pascon agan Arluth (The Passion of our Lord), a poem of 259 eight-line verses and dating from 1375, is one of the earliest surviving works of Cornish literature.

The Tregear Homilies, the earliest surviving example of Cornish prose, is a series of 12 Roman Catholic sermons written in English and translated by John Tregear in 1555-1557. 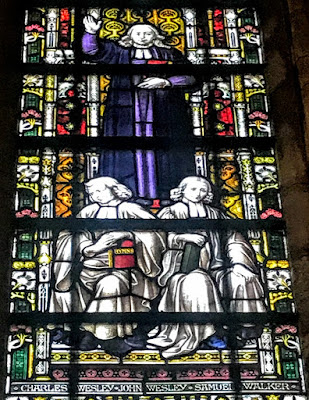 A window in Truro cathedral recalls the Wesley brothers and their visits to Cornwall (Photograph: Patrick Comerford, 2019)

At the Reformation, the failure to translate the first Book of Common Prayer into the Cornish and the imposition of English liturgy over the Latin rite in Cornwall stirred the ‘Prayer Book Rebellion’ in Cornwall in 1549.

The ‘Prayer Book Rebellion’ was a cultural and social disaster for Cornwall. Some estimates say 10 per cent of the civilian population of Cornwall was killed in the reprisals, and the rebellion also marked the beginning of the slow death of the Cornish language.

Later Roman Catholic martyrs in 16th century Cornwall included Cuthbert Mayne, a priest harboured by the Tregian family. Others were forced into exile, although Roman Catholicism never died out in Cornwall.

In the English civil wars in the mid-17th century, Cornish loyalties were divided between the king and parliament. The Parliamentarians ejected the Bishop of Exeter and deprived the cathedral clergy in 1645. Some clergy in Cornwall submitted to the new order, but others were removed from their parishes. The stained glass at St Agnes and the rood screen at St Ives were removed, and the church organs at Launceston and St Ives were destroyed.

The last church services in the Cornish language were held in Penwith in the far west in the late 17th century. 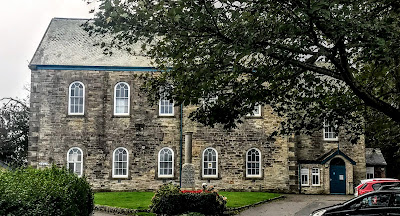 The arrival of Methodism

By the mid-18th century, the state-sponsored church was perceived as remote and ill-equipped to retain the loyalty of illiterate miners and labourers who formed most of the population of Cornwall. Mining was expanding, the population was shifting away from the old parish churches, and church attendance figures showed a downward trend.

John Wesley and his brother Charles first visited Cornwall in 1743, and gave their priority to the newly industrialised areas. But their timing was unfortunate and coincided with expectations of a French invasion. There were several incidents of mob violence at Methodist meetings, and John Wesley was threatened by a mob at Falmouth in 1745.

But as mining expanded, Methodism attracted many followers among the miners after 1780. From the early 19th until the mid-20th century, Methodism was the leading form of Christianity in Cornwall. 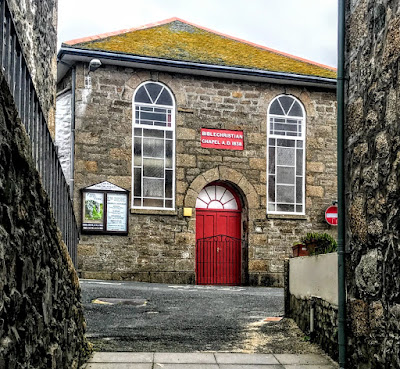 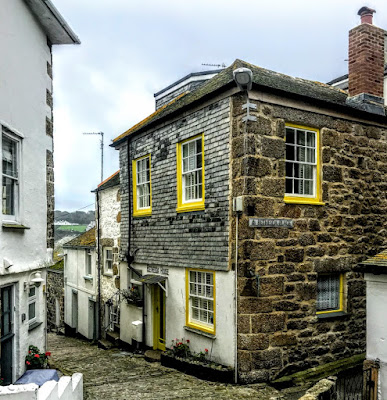 One reaction to the rise of Methodism among Anglicans was a renewal in High Church liturgy, with a new emphasis on the sacraments and priestly ministry. Many new parishes were established and new parish churches were built in Cornwall when Henry Phillpotts was Bishop of Exeter (1830-1869).

The Diocese of Truro was created in 1876, and Edward White Benson was appointed the first Bishop of Truro in 1877. The 24 honorary canons of Truro Cathedral hold stalls named after 24 Cornish saints, many of them with Irish, Welsh and Breton roots.

There was a renewed interest in Cornwall’s Christian past when the Poet Laureate Sir John Betjeman was buried in the churchyard of St Enodoc's Church in Trebetherick with a simple inscription on his gravestone, ‘John Betjeman 1906-1984.’ 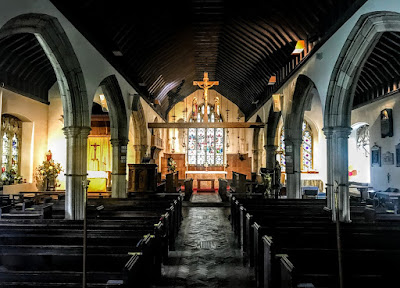 Inside Saint Agnes Church … there was a renewal of Anglo-Catholicism in Cornwall in the 20th century (Photograph: Patrick Comerford, 2019) 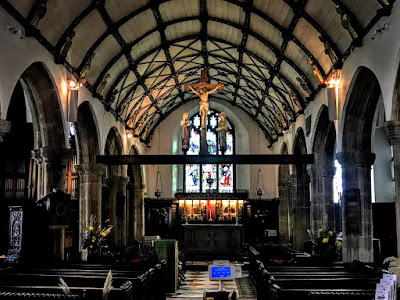 Anglicanism in the 20th century was marked by the spread of Anglo-Catholicism, and the use of Cornish as a liturgical language was revived.

In recent decades, Methodism in particular has declined numerically. But there has also been a renewed interest in the older, Celtic forms of Christianity in Cornwall. Cowethas Peran Sans, the Fellowship of Saint Piran, was founded in 2006 and Fry an Spyrys (Free the Spirit) was formed in 2003 to call for the disestablishment of the Church of England in Cornwall. 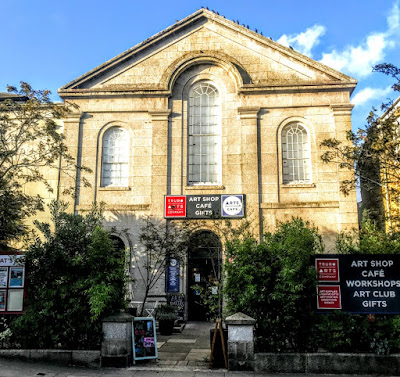 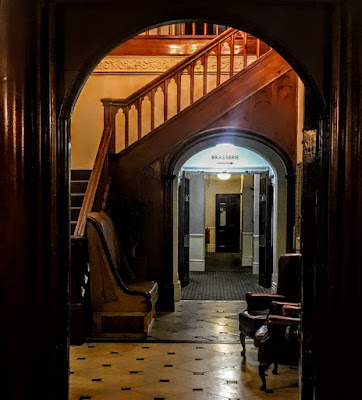 A former convent in Truro is now an hotel (Photograph: Patrick Comerford, 2019)