Ealing Abbey is the first Benedictine abbey in Greater London since the Reformation (Photograph: Patrick Comerford)

This week is Holy Week in the Orthodox Church. My photographs this morning (27 April) are from Ealing Abbey, where I spent two weeks studying some years ago, following the daily cycle of prayer with the monks in the abbey, with the psalms, canticles, antiphonies, Scripture readings and prayers.

During those two weeks, I was reminded each day of the shared tradition in the Benedictine offices and the Anglican offices of Morning Prayer and Evening Prayer.

Ealing Abbey began life as Ealing Priory over a century ago in 1916. When it became Ealing Abbey in 1955, it was the first Benedictine abbey in Greater London since the Reformation. I was there to study Liturgy in the Institutum Liturgicum, based in the Benedictine Study and Arts Centre.

The Benedictine motto is: ‘Ora et Labora.’ This does not present prayer and work as two distinct things, but holds prayer and work together. For Saint Benedict, the spiritual life and the physical life are inseparable. As he says: ‘Orare est laborare, laborare est orare, to pray is to work, to work is to pray.’

There was an old cutting from the Daily Telegraph on the desk in my room that says the Benedictine tradition is so rooted in English life and culture that: ‘Some claim to see the Benedictine spirit in the rules of Cricket.’

Dom James Leachman, a monk of Ealing Abbey, Director of the Institutum Liturgicam, and Professor of Liturgy at the Pontifical Institute of Liturgy in Sant’Anselmo, Rome, says the Anglican and Roman Catholic churches are ‘two vigorous traditions’ on these islands that ‘nourish the life of learning and prayer of millions of Christians.’ Writing in the Benedictine Yearbook, he said, ‘Both traditions find shared and deep root in British and Irish soil and in the history of our islands … we are constantly present to each other.’

Ealing Abbey is just half an hour from Heathrow Airport, and the idea of a monastery close to a busy airport and in heart of suburban London seems a contradiction in terms to many. But Saint Benedict’s Abbey in Ealing is one of the largest in Britain and the main work of the monks is parochial work.

Ealing Abbey has been the home at times for many notable monks, including Dom David Knowles, the monastic historian and later Regius Professor of Modern History at Cambridge, who lived there in 1933-1939 while he was working on his magnum opus, The Monastic Order in England.

Dom Cuthbert Butler (1858-1934) also lived at Ealing following his retirement as Abbot of Downside from 1922. His books included critical editions of the Lausiac History of Palladius and The Rule of Saint Benedict, and he was the author of Western Mysticism, Life of Archbishop Ullathorne, and History of the Vatican Council.

John Main’s teaching methods are now used throughout the world, and those who have acknowledged his influence include the former President, Mary McAleese, Archbishop Rowan Williams and Metropolitan Kallistos Ware. 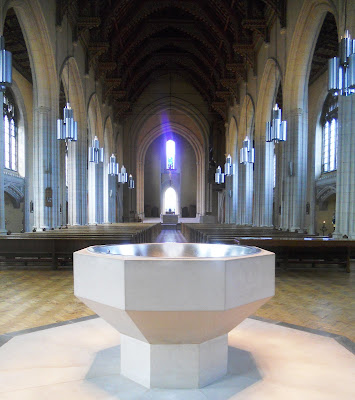 Ealing Abbey began life as Ealing Priory over a century ago in 1916 (Photograph: Patrick Comerford)

22 At that time the festival of the Dedication took place in Jerusalem. It was winter, 23 and Jesus was walking in the temple, in the portico of Solomon. 24 So the Jews gathered around him and said to him, ‘How long will you keep us in suspense? If you are the Messiah, tell us plainly.’ 25 Jesus answered, ‘I have told you, and you do not believe. The works that I do in my Father’s name testify to me; 26 but you do not believe, because you do not belong to my sheep. 2 7My sheep hear my voice. I know them, and they follow me. 28 I give them eternal life, and they will never perish. No one will snatch them out of my hand. 29 What my Father has given me is greater than all else, and no one can snatch it out of the Father’s hand. 30 The Father and I are one.’ 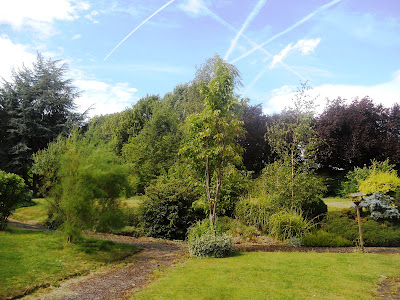 The stillness and quietness of the abbey gardens make it easy to forget that Heathrow Airport is only a few miles away (Photograph: Patrick Comerford)

Let us pray for continued peace and reconciliation in South Africa. 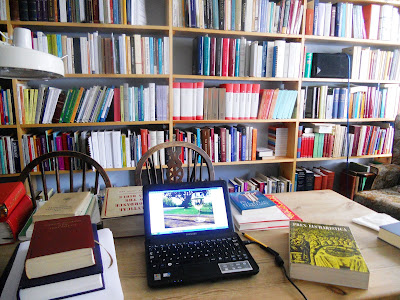 Working in the book-lined Scriptorium … once the research workplace of the Biblical scholar Dom Bernard Orchard (Photograph: Patrick Comerford) 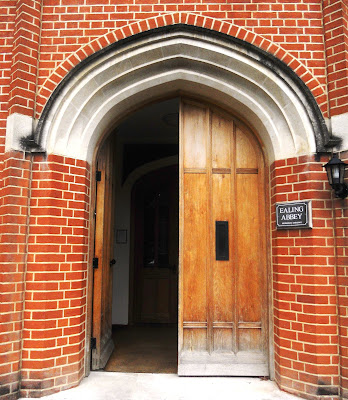 There was a warm welcome from the monks of Ealing Abbey (Photograph: Patrick Comerford)