Canon Island: a monastic
retreat among 29 islands
in the Shannon estuary 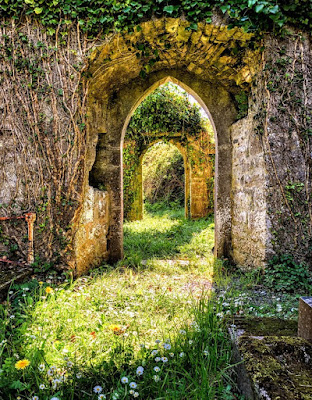 It was a warm, balmy weekend, and it felt as though summer had broken through too early in these closing days of April.

On Sunday afternoon (25 April 2021), some of us went out on a boat from the Deel Boat Club on the banks of the River Deel, north of Askeaton, and followed the course of the River Deel north into the estuary of the River Shannon, with the afternoon sun sparkling on the waters and on the islands.

At times, it seems there are as many islands in Askeaton parish as there are townlands, including the islands and islets of White Island, Holly Island, Greenish Island, Aughinish Island and Lisilaun. 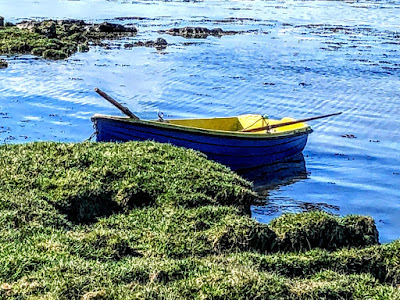 Three of us rowed from the boat in the Shannon estuary onto Canon Island (Photograph: Patrick Comerford, 2021)

The Anglo-Normans approaching from Limerick along these waters imagined the shore of Co Clare on the north side of the Shannon as an archipelago. They picturesquely named it ‘the cantred of the isles of Thomond,’ a name still preserved in that of the barony of Islands.

As the boat rested in the waters between Inishmacowney and Canon Island, three of us rowed out to Canon Island, a 270-acre island in the estuary, about 2.5 km east of Kildysart, Co Clare, and about 1.5 km from the shore on the mainland.

Canon Island is east of Inishtubbrid Island, south of Inishmacowney, and east of Inishloe or Loe Island. It is the largest of 29 small islands that span the crossing of the Shannon and Fergus estuaries, and the abbey ruins stand on the north-east corner of the island. 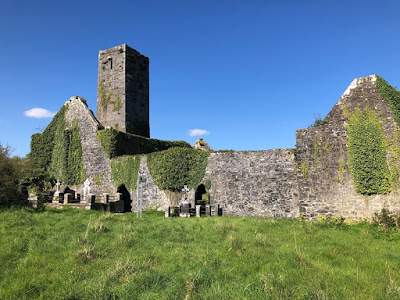 Canon Island Abbey on Canon Island … Canon Island was granted to the monks of Clare Abbey by the O’Briens of Thomond (Photograph: Patrick Comerford, 2021)

The island was granted to the Augustinian Canons of Clare Abbey in 1189 by Domnall Mór Ua Briain (Donald O’Brien), King of Thomond . The abbey was founded in the late 12th century, but it was a separate community and was not dependent on the larger Clare Abbey. 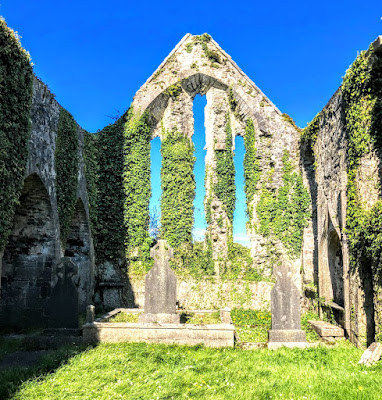 The East End of the abbey church … Canon Island may have been a key part of the diocesan reorganisation in the late 12th century (Photograph: Patrick Comerford, 2021)

After Saint Malachy’s death in 1148, the Augustinian order continued to spread, and many new houses were sponsored after 1176 both by the Irish and by the Anglo-Normans. By the end of the 12th century, the canons regular had become the predominant order in Ireland.

Clare Abbey was founded in 1189, when the short-lived diocesan status of Saint Senan’s island monastery of Iniscathaigh (Scattery) and its attached churches was under review. Scattery was too small a territory to survive as a viable diocese. When the death of Bishop Aodh Ó Beacháin in 1188 provided an opportunity to revise the diocesan boundaries, Scattery became a rural deanery, and its ‘termons’ or outlying churches were subsumed into the Dioceses of Killaloe and the Diocese of Limerick on either side of the Shannon Estuary. 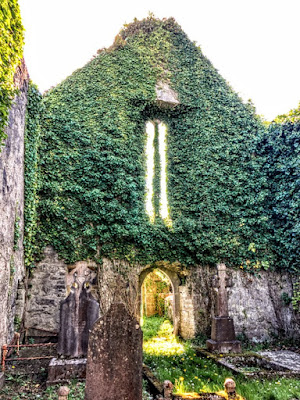 The West End of the abbey church … there are no written references to the abbey until the late 14th century (Photograph: Patrick Comerford, 2021)

The foundation for Canons Regular at Clare Abbey in 1189 may have been part of redrawing and reforming diocesan boundaries, and many parishes attached to Clare Abbey had previously been linked with Scattery.

The island is one of the endowments included in the charter granted by Domhnall Mór to Clare Abbey, but a date for building the abbey on Canon Island is uncertain. Thomas Westropp, the Limerick historian and antiquarian, described the abbey ruins in the late 19th century. He places some portions of the buildings in the late 12th century. There are no written references to the church, however, until the end of the 14th century. By then, it had already fallen into disrepair. 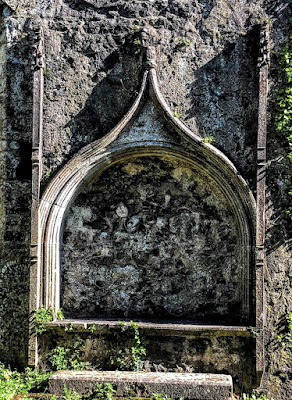 The Mac Giolla Pádraig (Fitzpatrick) family and the Mac Mahon family, the ruling family of Clonderlaw frequently contested the control of the abbey in the 15th century.

Dermot Mac Giolla Pádraig was abbot from 1426-1478. Serious charges were brought against him in 1452 by Thomas Mac Mahon who is described as ‘a deacon of Killaloe.’ Thomas Mac Mahon accused the abbot of wilful murder or of having aided or abetted murder as well as breaches of the vow of celibacy and of simony.

A papal mandate was issued to the Precentor of the Diocese of Emly to look into the case and, if he found the complaints true, to remove Mac Giolla Pádraig, and install Thomas as abbot instead. The complainant, Thomas Mac Mahon, had received a dispensation from a ‘defect of birth’ or canonical illegitimacy as ‘a child of unmarried noble parents.’

Eleven years later, in 1463, another Dermot Mac Giolla Pádraig, perhaps the abbot’s son, was also a dispensation from ‘defect of birth’ as the son ‘of an Augustinian abbot and an unmarried woman.’ Indeed, the position of abbot remained in the Fitzpatrick family for virtually the whole of the 15th century. 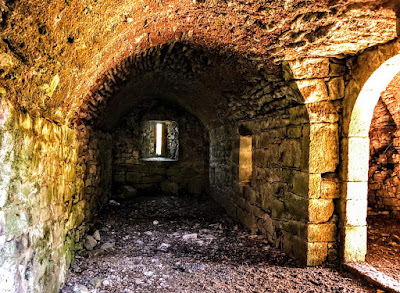 Vaults in the refrectory area of the abbey … the canons served as the working clergy of the neighbouring parishes (Photograph: Patrick Comerford, 2021)

For the greater part of the 15th century, the canons served as the working clergy of the surrounding parishes, including Kilmaleery on the opposite side of the Fergus estuary.

The Augustinian canons of Canon Island were involved in the parochial life of the hinterland along the estuary to Killofin and as far north as Kilmurry and Kilfarboy in Ibrickane. A number of earlier churches once stood on Canon Island and on some of the other islands nearby.

Westropp mentions a local tradition that five churches on the neighbouring islands, including Saint Senan’s oratory at Inishloe, were demolished, and the material used for the new foundation. 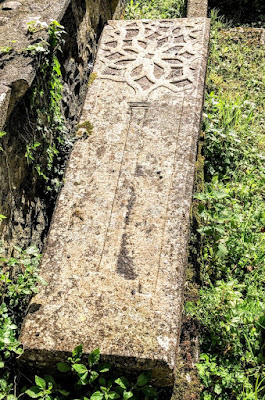 A mediaeval grave in the abbey church … Bishop Mahon O Griobtha of Killaloe, who died in 1482, is buried in the abbey but his tomb has not been identified (Photograph: Patrick Comerford, 2021)

The neighbouring island of Inisdadrum (Coney Island) had two early churches, one of which was a parish church united in cure to Inisgad in the 15th century. There was also a church on Inisloe – penitentiaries de Inis-Luaidhe – which tradition ascribed to Saint Senan, but all traces of this have disappeared. Another church on Feenish island was ascribed to Saint Brigid, ‘daughter of Conchraidh of the family of Mactail,’ a contemporary of Saint Senan.

Westropp failed to find any trace of an older building on Inisgad itself, but an aerial survey by the late Leo Swan in the 1980s shows that the abbey was built on the site of what seemed to be an extensive monastic enclosure. 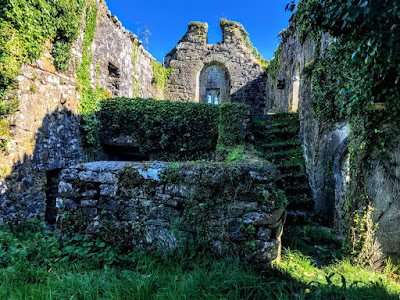 In the sacristy and chapter house … the monastery prospered until it the dissolution in 1540 (Photograph: Patrick Comerford, 2021)

The remaining abbey buildings include a church with Romanesque windows, two adjoining chapels, a belfry, a cloister and a large square tower. Roofs are missing from all of the standing buildings. Buildings to the east would have had a sacristy, chapter house and dormitory for the monks. The south range had a kitchen and refectory.

The monastery prospered until it was dissolved during the reign of Henry VIII in 1540. At its dissolution, the abbey consisted of four acres of arable land, 14 acres mountain and pasture, together with some islands nearby and the tithes of Kildysart and the vicarage or vicar’s share of the tithes of Kilchreest (Ballynacally). 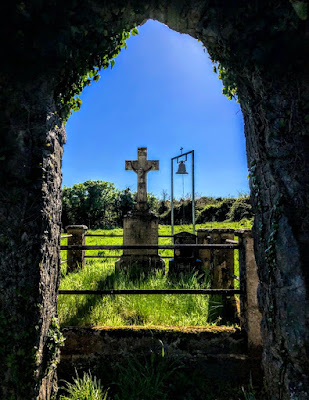 The island, monastery and its assets and income were granted to Donogh O’Brien, 4th Earl of Thomond. In Elizabethan documents, it is referred to as ‘Desertmorehely’ or Diséart mór-thuille (‘Monastery of the swollen tide’).

The Augustinians continued to live on the island until it was attacked by Cromewellian forces in 1651. Local folklore says Cromwell came up the River Shannon by boat in 1651. He decided there was nothing of importance on Canon Island. The Cromwellians were on their way back down the river, it is said, when the monks rang the bell. The Cromwellians returned and killed 27 monks, only three escaped.

Tradition says the three fleeing monks buried chalices, holy books and manuscripts but they have never been found. The monastery ceased the function after that time.

Canon Island remained part of the Thomond estate until the late 17th century, when Henry O’Brien, 7th Earl of Thomond (1620-1691) granted the property to Richard Henn of Paradise, Ballynacally, and the island eventually passed to local families. 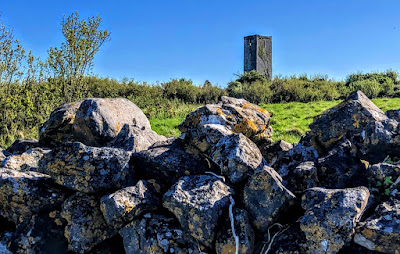 The walls around the monastic site … the last families left the island in the early 1970s (Photograph: Patrick Comerford, 2021)

The island population was at its height in 1841 with 54 residents. Canon Island was uninhabited by the time of the 1966 census. However, the last families did not leave the island until the early 1970s.

Canon Island is part of the parish of Kildysart. It has continued to serve as a place of burial and it remains a traditional pilgrim site for people on both sides of the estuary. An annual pilgrimage of island descendants and nearby villagers have travelled to Canon Island since 1990 to celebrate Mass at the abbey.

The pilgrimage was revived by the late Father Michael Hillery, Parish Priest of Kildysart. The journey from Kildysart to Canon Island takes about three-quarters of an hour. Pilgrims gather in Kildysart, Bunratty, Foynes and Askeaton and travel by currach and boat to the island. 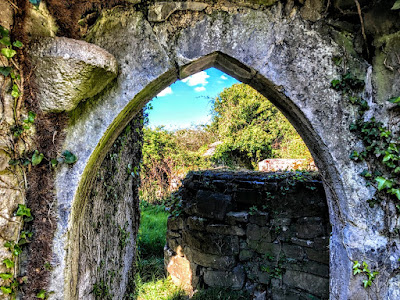 In the cloisters of Canon Island Abbey … the pilgrimage to Canon Island was revived in the 21st century (Photograph: Patrick Comerford, 2021)

During the pilgrimage in 2013, Seán Óg Cleary was baptised on Canon Island on 17 August 2013. During the Baptism, Father Albert McDonnell, parish priest, said there are more islands than townlands in Kildysart parish.

Canon Island was put up for sale by private treaty through John Casey of Lisdoonvarna at the end of 2010, with an asking price of €485,000. The island includes old dwellings and about 112 acres of good-quality land. 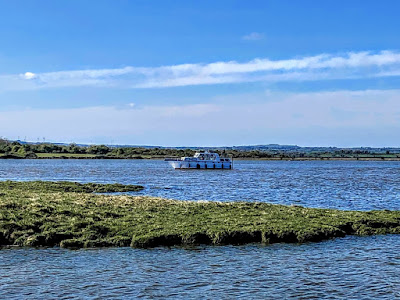