With its Duomo and baptistry, palazzi and basilicas, the Uffizi and the Ponte Vecchio, Florence was ‘the engine room of the Renaissance’ (Photograph: Patrick Comerford)

I have visited Florence, the city of architectural beauty and Renaissance grandeur, on a number of occasions. With its Duomo and baptistry, palazzi and basilicas, the Uffizi and the Ponte Vecchio, it outdid its rivals and its richest citizens sought to outdo one another. This was ‘the engine room of the Renaissance.’

The cathedral complex in the Piazza del Duomo includes the Duomo, the Baptistry and Giotto’s Campanile. The dome of the Duomo is the city’s iconic landmark and stands, alongside the Leaning Tower of Pisa and the Coliseum in Rome as Italy’s three most photographed sites.

Work on building the Duomo or Cattedrale di Santa Maria del Fiore (Cathedral of Saint Mary of the Flower) began in 1296. It was designed in a Gothic style by Arnolfo di Cambio and was completed by 1436 with the dome by Filippo Brunelleschi.

The exterior walls of the Duomo are faced in alternate vertical and horizontal bands of polychrome marble from Carrara (white), Prato (green), Siena (red), Lavenza and other places. The original façade, designed by Arnolfo di Cambio but usually attributed to Giotto, was begun 20 years after Giotto’s death.

The great brick dome of the Duomo is the city’s iconic landmark and stands alongside the Leaning Tower of Pisa and the Coliseum in Rome as one of Italy’s three most photographed sites. The dome, built in 1436 by Filippo Brunelleschi, is comprised of two domes – an outer and inner shell bound together with rings of sandstone.

This also the city of Michelangelo, who had a fraught relationship with the Medici family and designed the Medici mausoleum in the Basilica di San Lorenzo. Michelangelo fell from favour when he supported a rebellion against his own masters.

The octagonal, 11th century Baptistry of Saint the Baptist stands across the square in Piazza di San Giovanni. It is older than the cathedral and was built between 1059 and 1128. It has the status of a minor basilica in its own right.

The Baptistry is renowned for its three sets of bronze doors with relief sculptures. The south doors were created by Andrea Pisano and the north and east doors by Lorenzo Ghiberti. Michelangelo named the east doors the ‘Gates of Paradise.’ Dante and other Renaissance figures, including members of the Medici family, were baptised in the Baptistry. 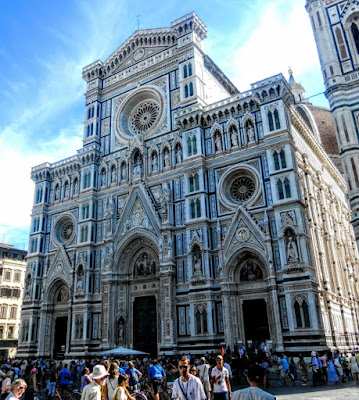 [Jesus said:] 38 ‘You have heard that it was said, “An eye for an eye and a tooth for a tooth.” 39 But I say to you, Do not resist an evildoer. But if anyone strikes you on the right cheek, turn the other also; 40 and if anyone wants to sue you and take your coat, give your cloak as well; 41 and if anyone forces you to go one mile, go also the second mile. 42 Give to everyone who begs from you, and do not refuse anyone who wants to borrow from you.’ 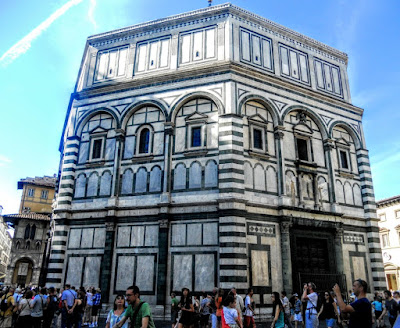 Let us pray for the people of Kenya and Ethiopia, whose land is particularly vulnerable to desertification and drought. May we work to improve this situation, becoming more aware of the links between our overconsumption and climate change. 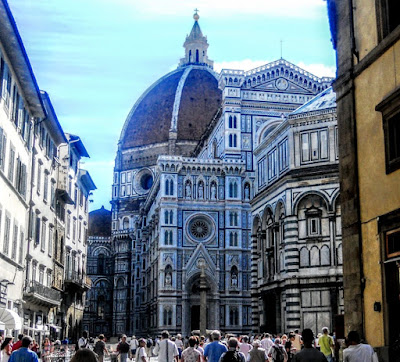