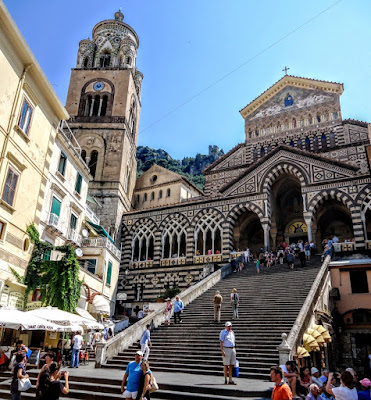 Today is the Second Sunday after Trinity (Trinity II), and later this morning I am presiding at the Parish Eucharist in Castletown Church, Kilcornan, and leading Morning Prayer in Holy Trinity Church, Rathkeale, Co Limerick. 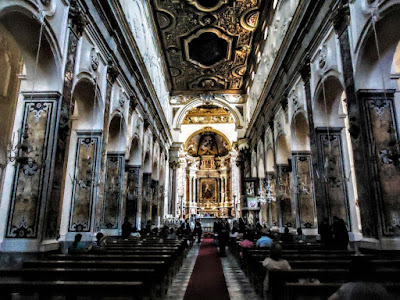 Inside the cathedral in Amalfi … this is a pair of cathedrals: the Cathedral of Saint Andrew and the older Cathedral of the Crucifixion (Photograph: Patrick Comerford)

Amalfi, once an independent Byzantine republic, then from 839 to 1135, one of Italy’s four great maritime republics with a fleet to rival the naval powers of Pisa, Genoa and Venice. Today Amalfi has a lively seafront and is an attractive small town, with narrow alleyways, hidden courtyards and a population of 5,500 – before the tourists and day-trippers arrive in the morning, or once they have left in the evening.

Amalfi also claims to be the home of Flavio Gioia, an imaginary 14th century mariner and inventor who never existed but who, nevertheless, is said to have perfected the compass and to have determined the direction of true north.

A few steps north of the statue of Flavio Gioia on the seafront, the town’s main square, Piazza Duomo, is dominated by Amalfi’s Duomo or cathedral which stands above the town centre at the top of a steep flight of steps.

At the top of the steps, this cathedral also has an impressive pair of bronze doors, dating from 1066 and originally from Constantinople.

The cathedral in Amalfi is, in fact, a pair of cathedrals: the Duomo di Sant’Adrea (Cathedral of Saint Andrew) and the older Duomo del Crocifisso (Cathedral of the Crucifixion).

Beside the paired cathedrals is the Chiostro del Paradiso or Cloister of Paradise, and below is the crypt with relics of the Apostle Andrew.

The Cloister of Paradise was once the ancient cemetery of the nobility of Amalfi, and is enclosed by rows and colonnades of 120 Moorish-style, white, slender, interlaced columns erected in 1266.

The cathedral dates from 596, but the original cathedral now serves as a museum. The newer cathedral, built in 1100, was originally in Romanesque style, concealed by the sumptuous baroque reordering of the 18th century.

In the crypt below, the cathedral claims its greatest relic – the head and bones of Saint Andrew, the first Apostle. During the Fourth Crusade in 1204, the head and bones were removed from a church in Constantinople by the papal envoy, Cardinal Pietro Capuano, and were buried in the crypt in Amalfi in 1208.

To this day, a crystal phial is placed on top of the sepulchre on some days in the church calendar for the past 750 years, and a dense liquid is collected. But similar sepulchres and similar miracles are claimed in Rome and in Patras in Greece. The ‘miracle of the phial’ overshadows the other treasures of the crypt, including statues by Michelangelo and Bernini.

As a wedding was about to begin, I stepped out into the extravagant atrium, built of striped marble and stone in a mixture of Spanish baroque, Moorish-Arabesque and Italian Gothic styles, with open interlaced arches.

Below me spread the delights of Amalfi as the clock in the campanile above chimed mid-day. The bride had arrived to applause from tourists and shopkeepers and was climbing the 62 steps covered with a long red carpet. 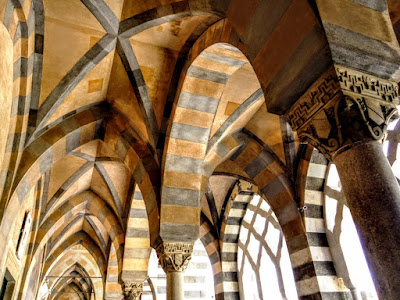 The atrium in Amalfi is built of striped marble and stone in a mixture of Spanish baroque, Moorish-Arabesque and Italian Gothic styles (Photograph: Patrick Comerford)

26 [Jesus] also said, ‘The kingdom of God is as if someone would scatter seed on the ground, 27 and would sleep and rise night and day, and the seed would sprout and grow, he does not know how. 28 The earth produces of itself, first the stalk, then the head, then the full grain in the head. 29 But when the grain is ripe, at once he goes in with his sickle, because the harvest has come.’

33 With many such parables he spoke the word to them, as they were able to hear it; 34 he did not speak to them except in parables, but he explained everything in private to his disciples. 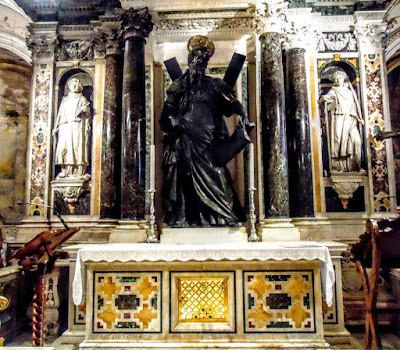 The shrine of Saint Andrew in the crypt in Amalfi’s cathedral (Photograph: Patrick Comerford)

Creator Father, may we be patient and kind,
As we seek to serve You.
Let us spread the seeds of the Kingdom,
Trusting in You that they will grow and flower.

The Cloister of Paradise is enclosed by rows and colonnades of Moorish-style, white, slender, interlaced columns (Photograph: Patrick Comerford)